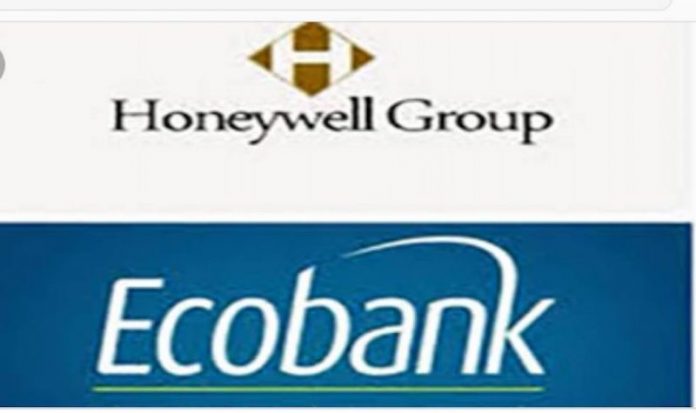 •     We will appeal judgment, Says bank

In a swift reaction, Ecobank disagreed with the judgment, saying it would appeal the decision.

Justice Ayokunle Faji made the declaration while delivering judgment in a suit filed by Honeywell Group against Ecobank Limited.

Following a dispute over an alleged indebtedness of N5.5 billion to Ecobank Limited, Honeywell Group and its sister companies instituted a suit seeking the court’s declaration that they were not indebted to Ecobank contrary to the bank’s claim.

The companies urged the court to hold that having made a “full and final” payment of N3.5 billion, as agreed at  the July 22, 2013 meeting, they were no longer indebted to the bank.

But the bank insisted that in paying the N3.5 billion, the firms did not comply with the terms of agreement.

It contended that the firms breached the agreement that the money should be paid before the examiners from the Central Bank of Nigeria (CBN), who were in the bank to examine its books, would leave.

But the firms contended that the bank failed to inform them when exactly the CBN examiners were to leave, adding that it made the final payment on December 12, 2013.

In his judgment yesterday, Justice Faji ruled in favour of Honeywell and its sister companies,  holding that they were no longer indebted to the bank based on the exhibits placed before the court by the defendant

The judge said Ecobank did not give any update about the actual time limit for the repayment of the loan.

“Based on the agreement reached between the parties, the plaintiffs are no more independent to the defendant,” the court held.

It further said: “I have looked through all the exhibits placed before the court, letters sent by plaintiffs to defendant about the remittance and the money the defendant ate talking about now did not feature in the letters to the plaintiffs.”

The judge also awarded a cost of N250,000 against the bank in favour of Honeywell and its sister companies.

However, in a swift reaction, Ecobank through a firm, Specialised Resolution Company, which took over the disputed Honeywell loans, strongly disagreed with the decision of the court.

ESRC said it would appeal the judgment as same did not take into consideration salient facts put before the court.

A spokesperson for ESRC stated that a debtor should be made to pay its full debt having failed to pay as and when agreed.

It said that the company would pursue recovery of the debts owed by the Honeywell companies to a logical conclusion through the courts, as return of depositors’ funds is key to ensuring the sanctity of agreements and viability of continued support and growth of local businesses by banks.