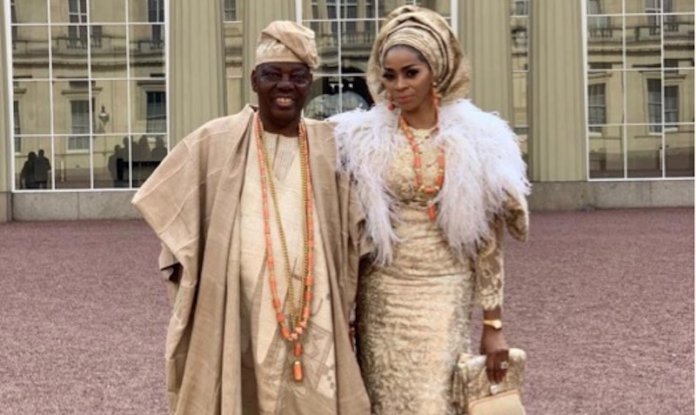 When it comes to the list of celebrities big enough to wine and dine with kings and queens, the Aare of Lagos, Alhaji Razak Akanni Okoya and his beautiful wife, Shade never fail to get a mention. The two longtime lovebirds were at it again recently as they jetted off to London to grace a royal garden party organized at the behest of the Queen.

That’s right, the Okoya duo who together rule over the Eleganza industrial conglomerate were personally invited to Buckingham Palace by Her Majesty, Queen Elizabeth the Second, Queen of the United Kingdom and the Commonwealth Realms. It was a recognition that left many of their local peers green with envy: not many people get the privilege to make small talk and admire flowers with arguably the noblest monarch alive.

Bedecked in matching outfits that proudly showed off the Nigerian culture, the Okoyas felt right at home among the galaxy of eminent personalities from all over the world that graced the occasion. Whenever they moved they turned heads and widened eyes, especially Sade. Age has not dimmed her allure even jot. She retains the captivating quality that made her billionaire businessman husband fall head over heels in love all those years ago.

Among the world-famous guests who stormed Westminster for the Queen’s annual garden ball were the Duke and Duchess of Cambridge, Prince William and Kate Middleton. They were just the icing on the cake of 8000 outstanding men and women like the Okoyas who were invited to feast on tea and sandwich with the queen on account of their contributions to their local communities.

Trust Shade to make a statement abroad just as she has been doing closer to home. She was the embodiment of class and sophistication and handled each interaction with grace and effortless ease, as if she were born for such occasions.