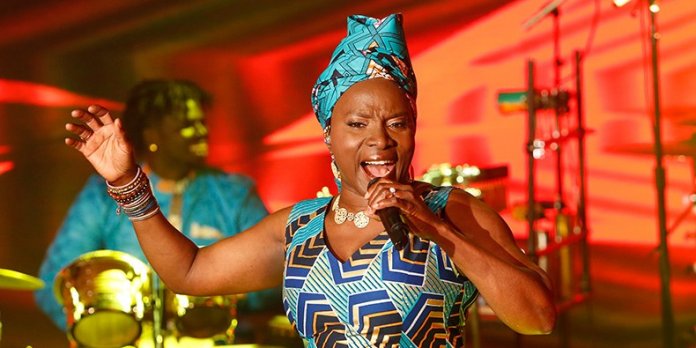 Originally Angelique Kpasseloko  Hinto Housinnou Kandjo Manta Zogbin Kidjo, the 58-year-old native of Benin Republic will be on the show with Sandra Suubi, an artiste and song performer from Uganda, as well as Ria Boss, a neo-soul singer and songwriter based in Accra, Ghana.

Kidjo is renowned for  her diverse musical talents evidenced in her popular songs including Batonga which she performed in 1992; Agolo, 1994 and Wombo Lombo, a blockbuster released  in 1996. She is also an actress who has featured prominently in several movies including The CEO, Mother of George and People I Know.

She won a Grammy Award  for Best Contemporary World Music Album in 2008, having earlier received the Mobo Awards in 2002.  Kidjo is a holder of the Commander of the National Order of Benin and the Afropop Hall of Fame given to her in  Cotonou and the United States of America in 2008 and 2009 respectively.

Suubi, a gospel artiste, is blessed with a voice which is reputed for extolling the greatness of God. Her most popular songs include Kingdom come, Tuli Njibwa and  Nsiimye which she performs with her assemblage of amazing vocalists.

Wearing a dress made with plastic bottles at her graduation in 2018, the  masters degree holder in Fine Art from Makerere University in Kampala, capital of Uganda, said it was her way of showing that plastic bottles could be recycled in diverse ways.

Maria Bossman Damiba, known widely as Ria Boss, is  described by CNN as a neo-soul singer and song writer. She is a female romanticist whose  name has been registered on the Ghanaian top chart through her albums including Lonecat, Underwater, Sweetbaby and Sampleplate. She believes in creating her realities through her soulful  music which celebrate womanhood and the virtues that are bedrocks of successful families and vibrant nations.