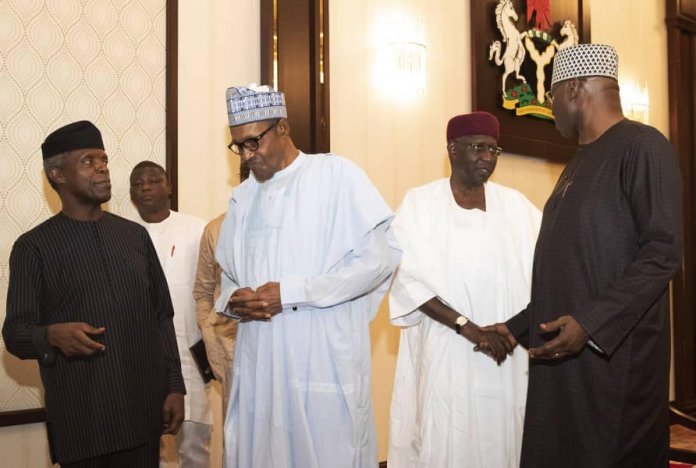 *Says he warned Osinbajo against being mobbed by market women

President Muhammadu Buhari Monday night in Abuja disclosed how he warned Vice-President Yemi Osinbajo against being mobbed by ‘hefty’ traders while distributing ‘trader moni’ in the market.

The president, who made this disclosure while hosting the vice-president and other prominent government officials when breaking fast in the State House, said when he saw some of the market women confronting him, he had to warn him to be careful because he didn’t want anything to happen to him.

Buhari who described the ‘trader moni’ initiative by Osinbajo as very good, also disclosed that he was first reluctant to buy the idea but had to succumb later when the vice president insisted.

However, the president said he later found that Osinbajo was ahead of him in thinking when he saw the success of the programme, which he said attracted many people to the government and consequently made him to be pleased with the vice president.

“This `market moni,’ I warned the vice-president. I don’t like him to be mobbed, especially the way I see hefty women coming and confronting him, he should be very careful.

“These are very good initiatives. Initially, I  was quite reluctant but I must admit that they are very good programmes and they endear this government to a lot of poor people because of these N5,000 or N10,000 being given to them as loans.

“They are fantastic programmes and I have to admit quite honestly that the vice president was ahead of me by insisting on them. But he knows me. If he insists, I will say, ‘okay, go and do what you like.’ He did it and I’m very pleased as he is being very successful,’’ Buhari said.

Buhari also lamented the spate of poverty in the country, saying whenever he drove around the country and saw the degree of prevalent poverty in the land, he was always upset by the appearances of poor people, the almajiris, whom he said went about with bowls, looking for what to eat.

According to him, for such poverty-stricken Nigerians, education is a luxury, pointing out that the elite including himself were failing by their inability to put in place certain programmes that could guarantee basic education of the people irrespective of the level of their poverty.

Against this background, Buhari commended Osinbajo whom he said initiated the school feeding programme adding that as a result of the programme, enrolment of pupils in schools has improved.

The president also lamented that some Nigerians have no sense of compassion and so do not care about what happens to others.

“When I drive around the country, what upsets me very much is the status of our poor people in this country. You see young people, the so-called almajiris with torn dresses, with plastic bowls. They are looking basically for what to eat.

“The question of education (to them) is a luxury. I think Nigerian elite, we are all failing because I think we should have a programme that will at least guarantee some basic education for our people no matter how poor they are.

“So, I welcome the vice-president initiate of the school feeding programme. If you check in your localities, the enrolment into schools improved because a lot of children can get at least one good meal a day. This is the position of this country.

“But, culturally some of us are quite merciless. We don’t care about what happens to others. We just keep on moving forward,” the president submitted.

Also speaking at the event, Osinbajo thanked the president for inviting him and other members of the cabinet, saying irrespective of their religious backgrounds, Nigerians must continue to be their brothers’ keepers.

The vice-president then proceeded to highlight some features of Ramadan which he said he knew in the past but appear to have changed now.

His words: “Mr President I must say that there are some reasons I had always looked forward to the Ramadan session. But some of those reasons are now being seriously challenged.

“The first of those reasons is that during the Ramadan meetings are usually very short. But, unfortunately last Wednesday Mr President seemed to have destroyed that very good notion by taking us through the longest FEC meeting in the history of the Federal Executive Council.

“So, I think that all we can truly expect now from the session is possibility what it was meant to do which is to remind us of some of our responsibilities to ourselves as brothers and to our fellow men/women especially our roles as leaders.

“I think is auspicious that this particular Ramadan falls at the eve of the new term in office. So, it is an opportunity for us to remind ourselves over the core mandates which is the welfare and security of majority of our people,’’ he said.

The Governor of the Central Bank of Nigeria, Godwin Emefiele, the Director-General of the Nigerian Television Authority, Alhaji Yakubu Ibn Muhammed, and the Chairman, National Hajj Commission of Nigeria, Abdullahi Mukhtar, were among the dignitaries at the event.