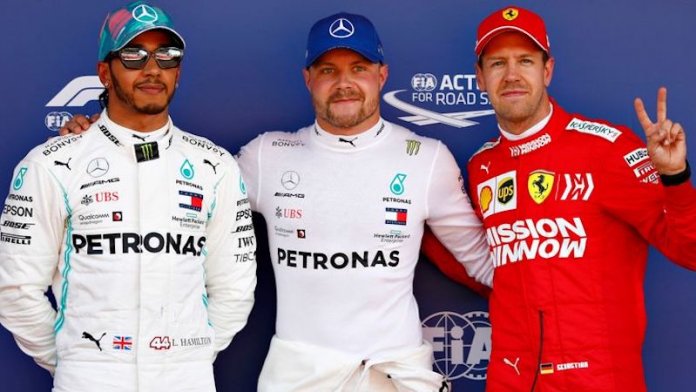 Valtteri Bottas beat Lewis Hamilton to take his third pole position in a row and lead a Mercedes one-two in qualifying at the Spanish Grand Prix. The Finn was 0.634 seconds ahead of Hamilton, who made a series of errors on his first lap before a slower track meant an improvement was impossible on the next.

Ferrari’s Sebastian Vettel was third with an 0.866secs gap to Bottas. Red Bull’s Max Verstappen was fourth, ahead of Ferrari’s Charles Leclerc.

Bottas, who leads Hamilton in the championship by one point, set a superb one minute 15.406 seconds on his first run in final qualifying, while Hamilton had a mistake-strewn run.

He had wheelspin out of the final corner starting the lap, then ran wide out of Turn Seven, bouncing over the kerbs on the exit. And then he ran wide again at Turns 12 and 13.

By the time he did his second run, the track was slower, partly because of the gravel that Hamilton himself had deposited on the track in the final sector, and none of the top four improved.