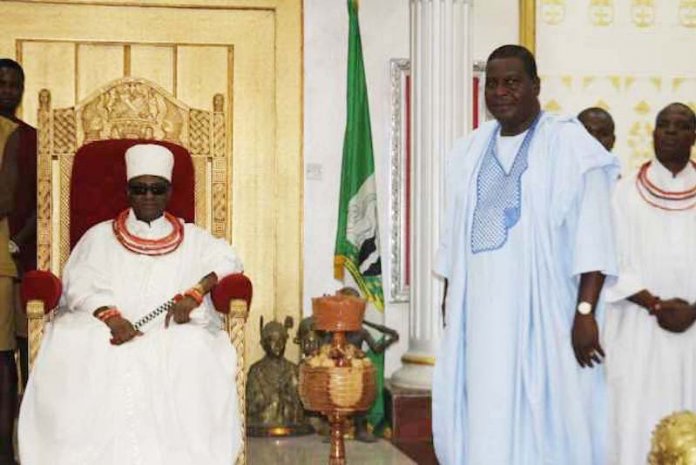 The Oba of Benin, Ewuare II, has disclosed plans to celebrate his fourth anniversary on the throne of the ancient Benin Kingdom during the National Festival of Arts and Culture (NAFEST) slated for October in Benin.

The Oba further said that NAFEST 2019 in Benin will be given a royal touch and assured NCAC and the administration of governor Godwin Obasaki that the Benin Kingdom would mobilize fully to give the event both national and international exposure, expressing gratitude to the federal cultural agency for finding Edo State and the Palace worthy of hosting the national festival.

A former diplomat and accomplished culture influencer, Oba Ewuare II noted that his desire and intention to celebrate his fourth anniversary which coincides with NAFEST, will give the festival of national unity a royal touch.

He commended the passion for Nigeria’s cultural promotion by the Director-General of the National Council of Arts and Culture, Otunba Segun Runsewe.

Earlier in his opening remarks, Otunba Runsewe informed the Oba that the purpose of his visit with his entourage was to obtain his royal blessing as African culture and tradition demands.

The NCAC DG noted that NAFEST also called “Unity Forum” was started during General Yakubu Gowon’s administration in 1970 as a platform to initiate a post – civil war national reconciliation, adding that it has been proven beyond doubt that culture is the best vehicle to advance national unity, peace and development.

He continued that a day of royal splendour would form part of NAFEST to help showcase and celebrate the very rich cultural endowment of the ancient Benin royalty.

This is the second visit by Otunba Runsewe in less than four months after the January 24 visit to Edo Governor Godwin Obaseki to present the national instrument of hosting the event and to ensure that both the political and traditional power bases of Edo State are carried along to give NAFEST 2019 attention and support.