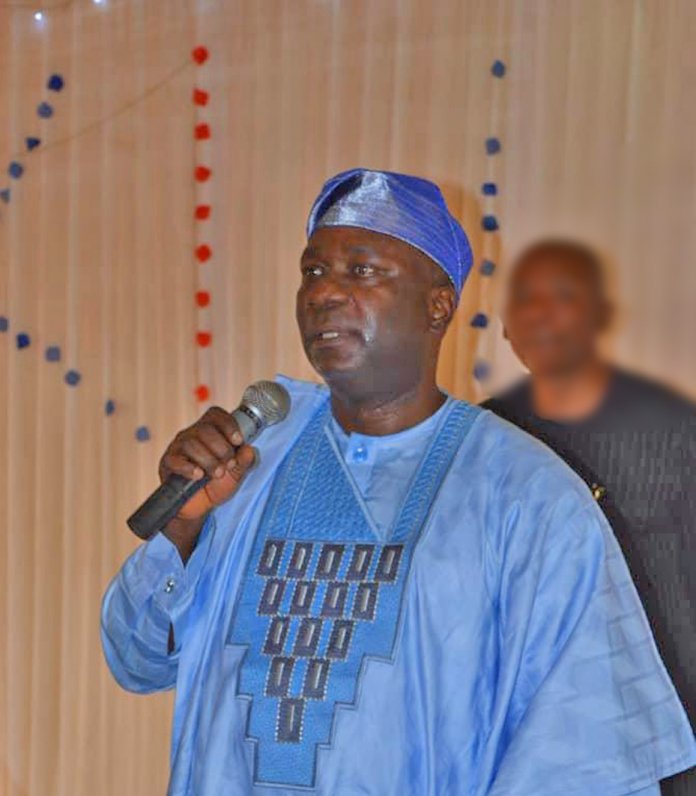 Penultimate Saturday will go down as a milestone in the history of Otuo, one of the major communities that make up Owan East Local Government Area of Edo State.

Eminent personalities that represent the Who-is-Who in the town, turned out in their numbers, to celebrate one of their own, Ernest Afolabi Umakhihe, who, last December was appointed to the position of a Federal Permanent Secretary. And of course, Otuo Exclusive Club, where Umakhihe is a past President did not spare anything to ensure that this first Permanent Secretary in the history of Otuo, is celebrated with fan-fair and glamour. The Ovie of Otuo, His Royal Highness, Julius Segun Ojeabuo, led the way to Azama College Hall that Exclusive Club had decorated for the celebration.

Expectedly, a retired Director of the National Psychiatric Hospital Management Board, Dr. Dave Agbi, chaired the occasion. He had in company on the high table such distinguished Otuo professionals like Professor and Mrs J. B. Aregbeyen, a former Patron of the club, Chief Alex Ilalokhoin and his wife, newly elected member of Edo State House of Assembly, Hon. Eric Okaka and the National President of Exclusive, Hon. Andrew A. Adebo and his wife, the celebrant’s father, Chief Adewole Umakhihe and the Edo State Government was represented by the state’s Commissioner for Local Government and Chieftaincy Affairs, Hon. Jimoh Ijegbai, Esq.

There were also high-powered delegations from all the places Umakhihe had worked before his current post. From Nigerian Institute for Oil Palm Research (NIFOR) in Benin City to the National Sports Commission (now Federal Ministry of Youth and Sports Development), Foreign Affairs Ministry, Ministry of Defence to the current Budget and National Planning all in Abuja, none was left out. Even the Benin Owena River Basin Development Authority CEO, Engr. Saliu Ahmed was there in person to join in celebrating the technocrat whose diligence has made him one of the most sought after public servants. There were also Engr. Austin Edeki, a retired Shell Petroleum Development Company top shot, Prof. K.O. Ilavbare, Dr. Greg Olu Imoohi, Prof. A. Afelokhai, Hon. Ambrose Imoode, Barrister Kunle Edeki, Rev (Dr) Okhaide Otuogbuma of Ambrose Alli University, Ekpoma and several others too numerous to count here.

Speaking at the reception, Chairman of the occasion, Dr Agbi said he holds members of Exclusive Club in very high esteem and very thoughtful of them to have come up with the idea of hosting Umakhihe to this grand and colorful reception. “As a young and dynamic Federal Permanent Secretary, Umakhihe still has so much to give to Nigeria. He will go places. It is hard work and diligence in his duty that has brought him this far. I pray to God to continue to give him the wisdom to pilot the affairs of his ministry. I know that he certainly will not disappoint the President and Commander in Chief that found him worthy of this exalted position of authority,” stressed Dr. Agbi in his opening remarks.

President of Otuo Exclusive Club, Andrew A. Adebo, called on sons and daughters of Otuo to emulate Umakhihe’s diligence and enterprise so that the sky will also be their limit. “What we are celebrating here today is the result of hard work. Umakhihe has shown us the way that hard work pays. He’s certainly an inspiration to younger Otuo sons and daughters. I therefore call on all qualified Otuo sons at home and in the diaspora to join the club in the task to lift our town to enviable height in Edo and Nigeria at large”.

Several other guests showered encomium on Umakhihe’s sterling leadership quality and large heart. A member of the club, Kayode Aghomo, who flew in from San Antonio, Texas, USA specifically to honour him, recalled how the Permanent Secretary sold his car to enable him travel abroad in search of greener pasture. “My businesses were down, jobs I did were not paid for but he came to my rescue by giving me the proceeds of his Mercedes Benz V boot he sold. This is just to show how magnanimous Umakhihe is”. In the same vein, some of the staff of NIFOR present at the ceremony also recalled that since he left the research institute for Abuja, nobody has been able to fill the vacuum created by his exit. Segun Solomon urged everyone present at the reception to continue to pray for him. He said he has no doubt that bigger things await Umakhihe in the country through his diligence and hard work.

The highpoint of the ceremony was the presentation of a giant-size congratulatory card and plaque to Umakhihe by one of the five founding members of the club, Kashimawo Ajakaiye. The Lagos District of the club also presented a bronze cast horse from the legendary Igun artistes in Benin.

Umakhihe’s citation, read by another founding member of the club, Ayo Erukpe Omoruanga drew deafening applause from the eminent personalities gathered inside that hall that Easter Saturday afternoon.

In his response, Umakhihe thanked Exclusive Club for the honour done him by the grand reception. He promised to continue to do his best to ensure that the club becomes the best in Edo State and Nigeria.

He also promised to execute his duties as a federal permanent secretary without fear or favour in line with the mandate given to him by President Muhammadu Buhari. “It is a big challenge but I will not disappoint Mr. President who found me qualified for the office. Mr. Ernest Afolabi Umakhihe was born in Otuo, Owan East Local Government Area, Edo State, Nigeria on the 5th of April 1964.  He attended Edo College, Benin City for his West African School Certificate and the University of Benin for his Bachelor Of Science Degree in Accountancy. He also obtained a Masters Degree in Business Administration from the same University in 1997.

He started his career with the National Institute for Oil Palm Research (NIFOR), Benin City in 1988 as an Accountant rising to the position of Head of Accounts of the Accounts Division of the Institute.  He held this position up to 2007 when the Division was upgraded to a Department and he was promoted to the position of Director of Finance and Accounts same year.