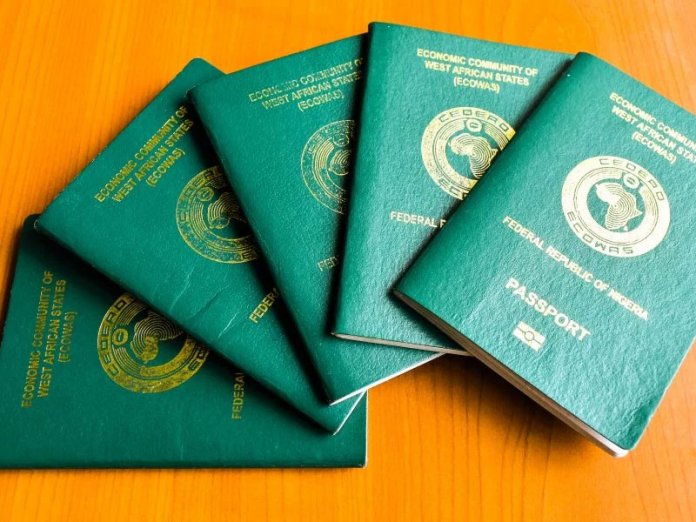 It was flagged off in Abuja and it is expected that in the next few weeks, it would be introduced at the Ikoyi Passport Office, Lagos, which is the busiest passport office in Africa, according to Immigration.

Ikoyi processes at least 1000 captures daily and this is followed by the Nigerian Passport Office in London, which is the second busiest in terms of traffic.

The Nigerian Immigration Service said with the new passport, one can get up to 10 years validity as against the outgoing one that has a maximum validity of five years.

The new passport, which will now be applied for and paid for online, has also added a new mandatory requirement that must be provided by all applicants.

The new requirement is the National Identification Number (NIN) and it will be provided in addition to the existing requirements like passport photographs, birth certificates, marriage certificates/newspaper publication, Local Government letter of identification, letter of consent for minors under 16 years, police report, in-case of lost passport amongst others.

This means that before a Nigerian will be qualified to obtain the new passport, he must first obtain his NIN at the National Identification Management Commission (NIMC), located at least in every local government headquarters in the country and some other offices nationwide.

According to the Immigration, “Those that are less than 18 years old cannot get a 10-year validity passport according to ICAO (International Civil Aviation Organisation) specifications due to expected change in their physical appearance.”

Immigration has specified ways applicants can apply and these include visiting a designated website and selecting the type of passport application, which includes fresh, renewal, lost, damage or correction of data.

“The step two is after completing the online application form, select the passport office you wish to visit for photograph, biometrics and eventual pickup. The next step is to make your payment online after which an application ID will be generated.
“Then step three is to proceed to the passport office you selected to complete the process. Don’t forget to take the necessary requirements stated in the second paragraph as well as evidence of payment made.

“If you reside outside Nigeria, you will be required to submit your application at the preferred Nigeria Embassy/High Commission or Consulate you selected during the online application. You have to also note that applicants are required to appear at the passport office chosen during online application for photograph and Biometric data capturing if current passport is more than six months old. Data on the old passport will also be the same as what will appear on the New Passport,” Immigration explained.

For frequent travellers, the 64-page passport seems to be good for them. Travel expert and organiser of Akwaaba African Travel Market, Ikechi Uko, told THISDAY that in the past he used to have viable visas in up to three passports due to the frequency of his travel, as the 32-page passport quickly fills up and he has to renew.

“Yes, my new passport booklet (64 pages) has lasted more than a year. Before now I have to change booklets every year. With the new booklet of 64 pages, you can have all your visas in one booklet. Before now I had visas in three booklets,’ he said.
So for frequent travellers it is more about the number of pages in the booklet than the duration of the passport because within 10 years they would have utilized the 64-page booklet at least twice.

Industry observers have, however, commended the Nigerian Immigration Service for categorising the passport pages and duration so that both frequent travellers and occasional travellers can be accommodation.

But THISDAY investigation has revealed that many Nigerians who wish to obtain new passport or renew the existing ones are perplexed because of the long period of time it takes before the passport is ready due to protracted paucity of booklets.

But THISDAY learnt that Immigration has made plans to start local production of passport booklets, which are currently produced overseas and imported into the country under a concession agreement, but recently due to issues alleged to do with payment, the passports are not promptly printed and imported as planned.