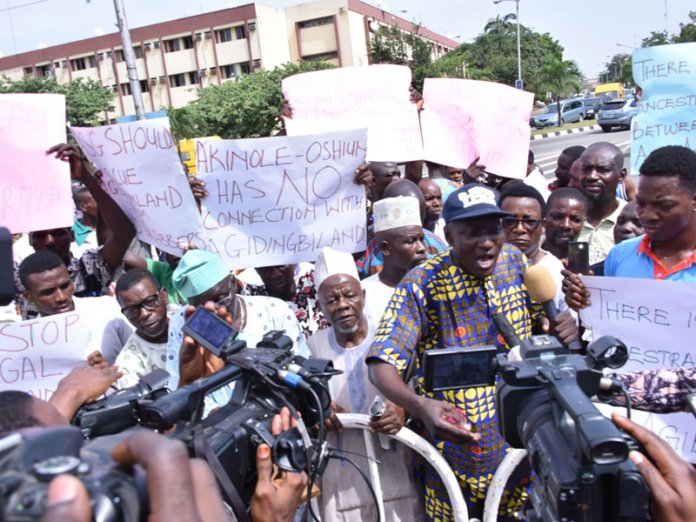 Scores of community leaders and residents of Agidingbi area of Ikeja, Lagos State, yesterday embarked on peaceful protest against the judgment of the Supreme Court, which awarded ownership of 398 acres of landed property in the community to a traditional land-owning family, Akinole-Oshiun.

The possession order is said to cover a large section of the Lateef Jakande Road, Acme Road, Fagba Close, and other streets around the area, with over 2,000 buildings.

The protesters who marched from Agidingbi to the Lagos House of Assembly complex in Alausa, said Akinole-Oshiun family, which is the judgment-creditor in the case, had already given them seven days’ ultimatum to vacate their houses, urging the state government to quickly intervene to avert bloodshed.

They displayed placard of various inscriptions such as “There is no ancestral link between Akinole and Agidingbi land,” ‘’Land grabbers are enemies of Lagos State,” among others.

Leader of Ojodu Legislative Arm, Hon Wasiu Bolaji-Seidu who is also a community leader in Agidingbi, said the news of the possession order came to the community as a big surprise as nobody from the area was served with the court process that led to the judgment.

“I am over 50 years; my father lived for over 90 years in this community before he died; my great grand-father died at the age of 150 years and I don’t know where Akinole is coming from and we have people like Habibatu Mogaji who was the Yeye-Oba of Agidingbi; we have Femi Okunnu who is our father in the community and we don’t know where Akin-ole came from.”

He particularly urged the state government to activate the provisions of the Anti-Land Grabbing Law of the state, and prevent the matter from degenerating into a full-blown crisis.

“To the best of my knowledge, I know that Lagos State has enacted a law duly signed by the governor, prohibiting land grabbing in the state because this is a clear example of such case. That is why we are here to call on the Lagos State House of Assembly to look into it and find a lasting solution, failure of which there will be bloodshed,” Bolaji-Seidu said.

Also speaking, Baale of Agidingbi, Chief Ganiyu Ayinde Haruna, said they were embarking on the peaceful protest to call the attention of government to the silent crisis that is brewing in the community.

Narrating how it all began, Haruna said: “On Friday last week, we woke up to see people posting possession order on our property and we don’t know these people. We have been living here for several years and the issue is we don’t know this family that is laying claim to ownership of our land.

“We have never heard any relationship with this Akinole family and so it is surprising to us. Nobody knew anything about the court case. I mean how can you enforce court judgment against a party that was never part of the case? We are peaceful people and we are urging the Lagos State Government, especially Governor Akinwunmi Ambode and the House of Assembly to intervene urgently in this matter because we don’t want bloodshed in our community.”

Also speaking, an 83-year old resident and Iyalode of Agidingbi, Evang Dorcas Faworaja said her great grand-parents were born in the area, insisting that the claimant cannot just come and lay claim to the community.

Receiving the protesters, the Deputy Majority Leader of the Assembly, Hon. Olumuyiwa Jimoh, commended them for conducting themselves peacefully, assuring that the lawmakers would look into their case.

“Let me assure you that we are going to look into your petition without any fear or favour and I can assure you also that you will receive judgment at the end of the day,” Jimoh said.