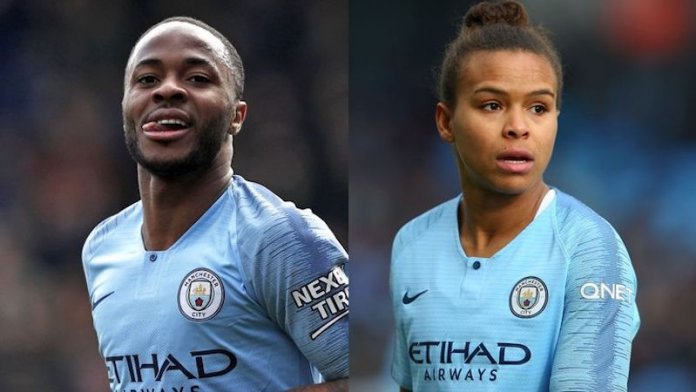 Sterling, 24, took the writers’ men’s award with 62% of the vote after he was named Professional Footballers’ Association Young Player of the Year.

Parris, 25, edged Arsenal’s Vivianne Miedema by 11 to 10 in the second stage of voting for the women’s award.

Netherlands striker Miedema was named PFA Player of the Year alongside Van Dijk on Sunday.

Parris has helped City to the Women’s FA Cup final and featured in England’s successful She Believes Cup campaign.

More than 400 FWA members voted in their award, with Sterling finishing more than 100 votes clear of Van Dijk,

Sterling becomes the first City player to win the award since 1969, when Tony Book shared the honour with Derby’s Dave Mackay.

As well as his 29 goals for club and country, the England forward was also praised for his public stance against racism, which has already won him other awards.

“Raheem Sterling is an exemplar of the talent and values our founding fathers sought to reward when they established the FWA in 1947,” said FWA chair Carrie Brown.

“To have been voted the 2019 Footballer of the Year by our members, and with such an overwhelming majority, clearly acknowledges the contribution from a player over one season but it also recognises the huge impact of Raheem’s courage to challenge preconceptions and fight racism, which will leave a legacy not just for future generations in football but society as a whole.

Van Dijk won the BBC Sport website’s player of the year, taking 56% of votes, with Sterling in second place on 26%.

Parris, who joined City from Everton in 2015, was named in the PFA Women’s Super League Team of the Year on Sunday.

Her 19 league goals and seven assists this season helped City to second in the Women’s Super League, behind champions Arsenal.

The FWA praised the Liverpool-born forward for her role in helping City to victory in the Continental Tyres Cup and in reaching Saturday’s FA Cup final against West Ham.

Parris was also praised for helping to set up qualifications in conjunction with Liverpool College.