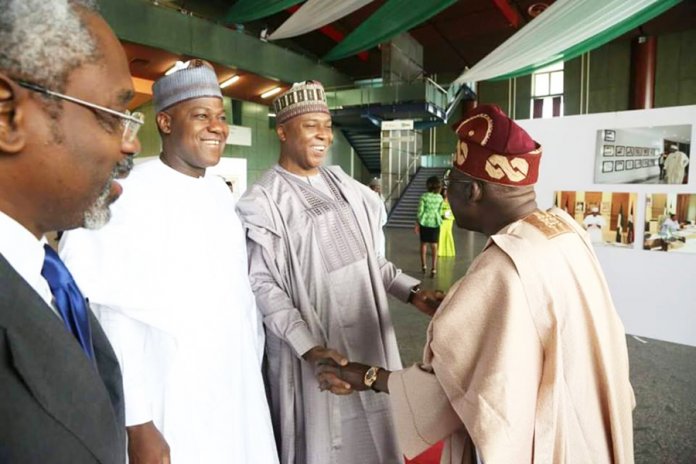 Unlike the experience of 2015, the battle for the leadership of the Ninth National Assembly will be messier, writes Olawale Olaleye

If the marked indications on the political turf were anything to pay attention to, it therefore means the current tussle for the leadership of the National Assembly is going to be ‘bloodier’ than the experience of 2015. To that extent, albeit unfortunately, the leadership of the ruling All Progressives Congress (APC) may not have learnt anything from the recent past experience.

Setting this off was the self-styled national leader of the APC, Asiwaju Bola Tinubu. In a statement titled: ‘Tinubu Focusing on the Issues of Today: Tomorrow is the Master of Itself,’ the former Lagos State governor pointed out that in 2015, Saraki bulldozed his way into the Senate presidency and as such, the APC would not allow a repeat of such in June, when the ninth national assembly would be inaugurated.

And then, he attacked pointblank.
“With the Senate leadership usurped by regressive elites, that chamber constituted a brake on progress and good governance. The Senate leadership, and to a lesser degree the House leadership, stymied APC legislative initiatives while attempting to hoist noxious, reactionary and self-interested legislation on the nation,” he explained in the statement by Tunde Rahman, his media aide.

From here, he activated the next phase of his attacks more specifically. Here, he accused the Senate President, Dr. Bukola Saraki, and the Speaker of the House of Representatives, Hon. Yakubu Dogara, of hijacking the budget process these past four years.

“National budgets were delayed and distorted as these actors repeatedly sought to pad budgets with pet projects that would profit them. Even worse, they cut funds intended to prosper projects that would have benefitted the average person. After four years of their antics halting the progress of government, we should do all we can to prevent a repeat of their malign control of the National Assembly,” he said.

From this station, he went very personal with Saraki. “He planted himself at the apex of legislative power. But his actions as Senate president showed a man devoid of compassion for the average Nigerian. All he cared for was power and position.”
And now, the clincher: “Soon he will be deprived of both. House Speaker Dogara has fared only slightly better. Occupying these positions is not a guarantee of future success. It is only a guarantee of present duty.”

He obviously didn’t stop there but went all the way in his clearly thought out attacks on the national assembly leadership, a move that attracted immediate response from the two leaders of both the red and the green chambers.
To serve his salvo of response was Saraki. In what was no less a proportional counterattack, the outgoing Senate President went straight to the points, taking up the issues one-by-one.

“Tinubu should know that if there was any mistake made on June 9, 2015, it was the miscalculation by himself and his small cabal in the All Progressives Congress (APC) who felt they could decide for the senators-elect and House of Representatives members-elect.

“When they failed after their grand-standing that they could always get whatever they desired, they resorted to undermining the institution of the legislature and waging a campaign of calumny against the lawmaking body.

“It is now clear that those who took senators away from the chambers contrary to the directive contained in the proclamation signed by President Muhammadu Buhari on June 9, 2015, are ‘mistake personified.

“It is obvious that if they repeat that arrogance during the inauguration of the ninth National Assembly, they will fail again, because Nigeria is greater than them. The institution of the legislature is bigger than the over-bloated egos of these power mongers and dirty schemers…It is obvious Tinubu’s arbitrary and tactless interference in the process for the emergence of the leadership of the ninth Assembly is already falling through.

“The frustration from this experience might have been responsible for these needless and baseless outbursts…He should stop treating the legislators like hapless pupils receiving orders from a cane-wielding headmaster.

“A situation where he, Tinubu, is dictating to elected legislators and ordering them to either comply with his directives or get out of the party will not augur well for the legislature in the next dispensation…We advise him to leave Saraki out of his manipulations and ‘jockeying and maneuvering for influence and power’, as he termed it,” Saraki stated in a statement by his media aide, Yusuph Olaniyonu.

Then enter the Speaker, Dogara, who was unsparing in his rather vitriolic response. Speaking too through his Special Adviser, Media and Public Affairs, Mr. Turaki Hassan, the speaker said Tinubu was “pursuing fascist agenda to control all levers of power in Nigeria.”
His words: “Only the ignorant with dubious academic certificates will say the maker of a document has padded the document that only he can constitutionally make. The legislature cannot be accused of padding a budget it has unquestionable constitutional power to review.

“The budget is a law and the executive does not make laws. Therefore, it’s only the ignorant and those who hold dubious academic certificates that say the maker of a document has padded the document that only he can constitutionally make.”

Advising Tinubu to be more circumspect in his language use especially, that he (Tinubu) spoke as a spokesperson of depravity, Dogara added: “Our reaction must, therefore, be seen as a provoked counter-punch. Anyone can descend into the gutter, if he so wishes, but no one has a monopoly of gutter language. We won’t run an adult day care centre anymore on matters like this.

“It is on record that the speaker has done more to stabilise this government more than Asiwaju Tinubu and his ilk, whose stock in trade is scheming, manipulation and subversion, especially when they feel they cannot be caught.

“When the history of Buhari’s administration is written by those, who know the truth of what really transpired in the last four years, Asiwaju’s pretentious loyalty to President Buhari will then be exposed. We won’t say more but no matter how long it may last, the truth will one day overtake lies.”

From this point going forward, you may not hear from any of these three again till after the June inauguration of the legislature. But they have done one thing successfully; they have set off the battle amongst their foot soldiers, a majority of whom are also not oblivious of the fact that the fight is not about now but 2023. What this means, therefore, is that battle for the control of the leadership of the ninth national assembly just got real as the gloves are completely off! Thus, the eventual winner is going to rely more on capacity for consensus-building, deft political moves, tighter lobbying skills and the ability to trade effectively on what is both tangible and achievable within the context of ‘cooperative opposition politics’. But do not make the mistake on what this is all about, because it is about the future no one can yet see or predict.