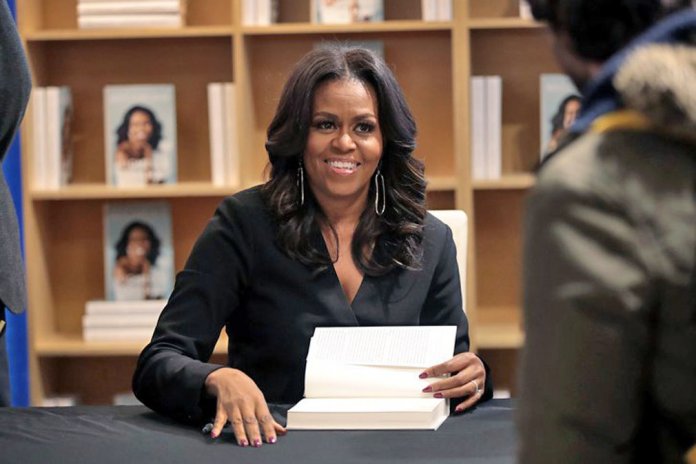 Former US First Lady Michelle Obama’s memoir continues to smash records. Michelle’s memoir is on track to become the most popular autobiography to date, according to its publisher. To her it was a big deal seeing her book when it was finally released and the reviews that had followed it moments afterwards. So she was excited, nervous. All that summed up her feeling. “I kind of realised because I texted my staff, I was like, ‘I’m sorry guys. I’m just realising this is a big deal. It just so hit me.

“People were starting to review the book as it sort of leaked out and then people were reading and then I was reading their reviews of the book and I was this is real. This is out. This is it…” Michelle noted while reflecting on her historic journey discussing her new book. It is her story from the South Side of Chicago to First Lady, and ultimately becoming a role model for millions. The book, titled Becoming, was first published in November last year and has already sold more than 10 million copies, according to Bertelsmann, Penguin Random House’s German division.

Quite instructive it is to note that the book is all about her. But not just about her or about women but as black people. “You know what I know about my story is that it is the quintessential American story.”  Becoming is an intimate, powerful, and inspiring memoir by Michelle Obama. Candid about her inner life, Michelle titles her life chapters “Becoming Me,” “Becoming Us” and “Becoming More,” which mapped perfectly with the psychological stages of identity, intimacy and care – the eras identified in women’s lives.

In that sense, Michelle Obama represents “Everywoman.” Noteworthy to state that in a life filled with meaning and accomplishment, Michelle Obama had emerged as one of the most iconic and compelling women of the present era. The former first lady was incredibly accomplished even before she married a future president and set an example of grace and dignity in the White House for eight years.

As First Lady of the United State of America – the first African American to serve in that role – she helped create the most welcoming and inclusive White House in history, while also establishing herself as a peaceful advocate for women and girls in the U.S. and around the world, dramatically changing the ways that families pursue healthier and more active lives, and standing with her husband as he led America through some of its most harrowing moments.

As sourced about her memoir, a work of deep reflection and mesmerizing storytelling, Michelle Obama invites readers into her world, chronicling the experiences that have shaped her from her childhood to her years as an executive, balancing the demands of motherhood and work, to her time spent at the world’s most famous address. With unerring honesty, and lively wit, she describes her triumph and her disappointments, both public and private, telling her story as she has lived it – in her own words and on her own terms.

Warm, wise, and revelatory, suffice to say “Becoming” is the deeply personal reckoning of a woman of soul and substance who has steadily defied expectations and whose story inspires hence it rocket sales. When the book was released in November of last year, it sold 725,000 copies on its first day and two million copies in North America within two weeks, quickly becoming the best-selling book of 2018. It also broke the record of best first-week sales at Barnes & Noble and went on to become a number one seller abroad, including in the U.K. and Germany. Now it looks like Becoming is on track to become the best-selling memoirs of all time.

Bertelsmann Executive Board member Markus Dohle had stated: “We published Becoming simultaneously in 22 countries through Penguin Random House publishers. I reckon Michelle Obama’s book has the potential to become the biggest memoir of all time.” According to the publishers, the book sold more than seven million copies across all formats in the six weeks to the end of 2018. It also became the best-selling book of 2018, 15 days after it was published, according to NPD BookScan data.

The 400 page book, Becoming, is the first in a two-book deal between the Obamas and Penguin Random House. The publishing house reportedly paid $60 million for the deal in 2017, a record for U.S. presidential memoirs. Following its success, Michelle’s husband, former president of the US Barack Obama, had also signed with Penguin Random House to publish his White House memoir. Obama’s memoir is expected to be released later this year, but a formal date has not yet been set.

Bertelsmann owns a 75% stake in Penguin Random House. Michelle Obama’s “Becoming” can be read in many ways: as a political memoir, as a story of being black and aspiring in America or as a Cinderella story that transports an ambitious black girl from a 900-square-foot apartment to a home with 132 rooms, 35 bathrooms and 28 fireplaces spread out over six floors, and a staff of ushers, florists, housekeepers, butlers and attendants for her every need.

Following the release of Becoming, the former First Lady went on a national book tour where she sat down with celebrities like Oprah Winfrey, Sarah Jessica Parker, and Reese Witherspoon. During one event, Barack even surprised her onstage and opened up about first meeting her: “I hadn’t met somebody who was that strong and that honest—somebody who I just felt was a rock. She was somebody who I knew at that point I would always be able to count on, and someone, if she was the mother of my children, I knew my children would turn out extraordinary.”

But even as Michelle Obama enters the final month of the global book tour for her memoir, one of her character traits, fashion, would not fail to attract necessary comments; most notably what she wore. The book tour was always going to challenge convention when it came to the clothes. Even as first lady, Obama strayed from protocol to wear everything from designer to high street. But that is not the focus of this piece. However, a look at the best autobiographies ever written includes memoirs by famous historical figures, authors, politicians, celebrities, and more.

Peter Kay’s autobiography ‘The Sound of Laughter’ tops the chart in terms of revenue at £9.3 million. Comedians figure prominently on the list with Paul O’Grady, Dawn French, Russell Brand, Michael McIntyre and Frank Skinner all making it to the top 50.

When the publication date is taken into account, the list looks very different. Steve Jobs biography, though the most expensive on the list at RRP £25, sold on average 535 copies a day since it was published in October 2011, making it the fastest selling book on the biography list. On Becoming as bestseller or not bestseller, an opinion declared that it is safe to say, no one in publishing was especially surprised to see Obama’s book on the bestseller list.

As Porter Anderson, editor-in-chief of Publishing Perspectives, told ThinkProgress, “People are seized by the current political climate like we don’t ordinarily see, and that is driving readership” to non-fiction and political books in particular. Even overseas, Anderson said, readers are clamoring for books about the American political scene. But the scale of the success is remarkable, and that particular honor — bestselling memoir of all time — is a little eyebrow-raising. Like, the best? Better than Angela’s Ashes? Better than Anne Frank’s diary?