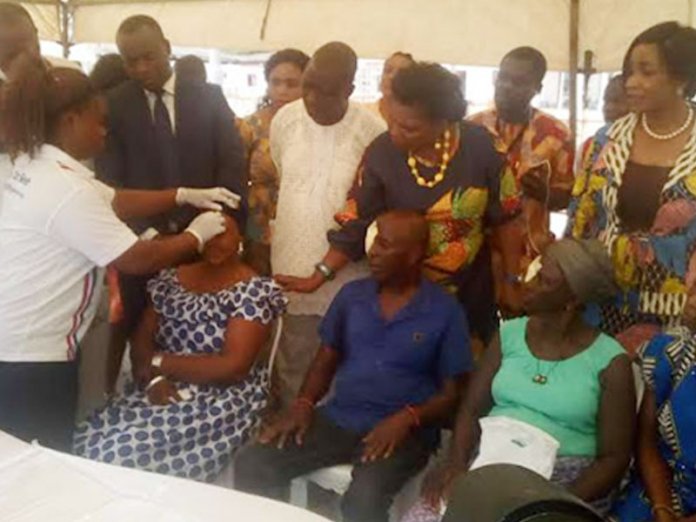 In line with its Corporate Social Responsibility, Adibe Emenyonu writes on how Seplat, in collaboration with the Nigeria Petroleum Development Company NPDC, organised free eye surgery and other medical treatment for host communities of Edo and Delta States

Genesis Esekose is a 12 years-old boy from Ughelli, Delta State. Genesis, according to his parents, Joseph and Grace Esekose, developed cataracts at the age of one and since then, they have been moving him from one hospital to another in search of solution.

Coming from indigent background, Mr and Mrs Esekose find it difficult to make ends meet not to mention coughing out between N100,000 to N200,000 for eye operation to restore his full sight.

Narrating their experience, they said: “Genesis was found to have cataracts at the age of one. It started with the first eye before the other eye was affected which further compounded his (our) problem. First, he can no longer see which slowsdown his educational pursuit, and at the same time, we don’t have the kind of money the hospitals are asking us to pay”.

Emphatically, the mother of Genesis said, “We have gone to many hospitals in Ughelli, some in Yenegoa, Bayelsa. Some of the hospitals we went to told us to bring N100,000 while others will charge us N200,000. We don’t have that kind of money”.

The 52 and 41 years old couple who are petty traders have almost lost hope to the fact that their son will become blind eventually. However, they had their faith rekindled when a neighbour introduced them to a community service programme sponsored by Seplat Petroleum for host communities and asked them to try their luck.

That luck eventually came as on getting to the medical service centre in Ughelli venue of the programme, Genesis was booked for an operation.

“One of the eyes was operated upon on Tuesday and they opened it on Wednesday. Then they also operated on the second eye on Thursday and opened it today Friday. I am very happy over what Seplat has done for my son, Genesis”, Mrs Esekose narrated, throwing her hands in excitement.

Solomon Ogbeide, 45 and a civil servant who resided at Ugbowo area of Benin City, capital of Edo State had almost a similar experience with little Genesis. The only difference is that he was not affected by cataracts at his early age like Genesis.

He said his started developing when he was aged 30 and pointed out that he had been taking medication as his salary can afford until he heard about the programme on radio and decided to give it a trial since he cannot afford the kind of money he was asked to bring for eye operation to remove the cataracts.

Genesis and Solomon are among the 3,000 persons that had free medical treatment organised by Seplat inside the Palace of the Oba of Benin. It was a culmination of one the month of free medication for host communities of Edo and Delta States.

Nwachuku also said the 2019 edition of the initiative which was organised by the Oil firm in partnership with the Nigeria Petroleum Development Company (NPDC), and Edo State Government to give free medical screening and treatments to the host communities, and some others, noting that all the eye surgeries performed were successful, without complaints.

She said the programme has been in existence since 2012, adding that every year, Seplat gathered professional team of medical doctors to carry out this task, to touch the lives of the people and to solve the eye problem, so that the people can have good healthcare.

“I am very happy to say that, over 65,000 patients had been saved. We have done almost 3,000 surgery for eye patients, and all of them were successful. Everything we did, and the eye surgeries are free.

‘’Yesterday and today, we saved over the lives of 500 people and while the event is going on, we did medical screening, and in the process, we discovered people who have HIV/AIDs, diabetes, sight problem, blood pressure and other illness to encourage them to be sound in health because health is wealth. We are really grateful because of the Edo State Government support of everything we have done at the Oba palace’.

‘’We are also grateful to the palace, the media for the efforts since this event and every other persons that came far and near to grace this programme.

‘’This is a programme we are committed to by using it to partner with our host communities. It is an event we use to impact the lives of those who have various eye sight problems in the localities. We all know how vital sight is to us. You could see how the 11 years old boy, Genesis Esekose, who could not see when he was in school is happy that, he can now see. Now he can go back to school again,’’ she stressed.

Also, in his remarks, Seplat Director of Operations, Effiong Okon, said apart from free medical treatment, the firm had been rendering scholarship and other social services as part of it’s social responsibility to host communities.
Okon noted: “Seplat is not just there to produce oil and gas, but to affect the lives and well-being of the host localities, and Nigeria, as whole. We are trying to play a key role by impacting the lives, and welfare of the host communities. We also help to enhance the lives of the people by giving scholarship to the real indigenes of communities”.

Expressing thank to the oil firm, Edo StateGovernor, Godwin Obaseki, said government’s major target is to ensure there is adequate security for companies and the people in the host communities in Edo state.

Obaseki, who was represented on the occasion by the commissioner for Oil and Gas, Mr. Joseph Ukghoke, said, ‘’ what we are doing is a combination of what the state government had been doing. What is expected by Seplat oil firm, as part of cooperate social responsibility by in Edo is to continue to reach back to the host localities”.

He said “We want Seplat to equally spread the initiative to other communities in the state. And we want other oil companies, in Edo state to learn and take example from Seplat. The Oba palace is a place we can use to reach out to the people in the state, and it is a good publicity, especially for those that are not from oil localities.’’

The father of the 12 years old Genesis earlier, said his family will ever remain grateful to Almighty God for bringing Seplat to their rescue.