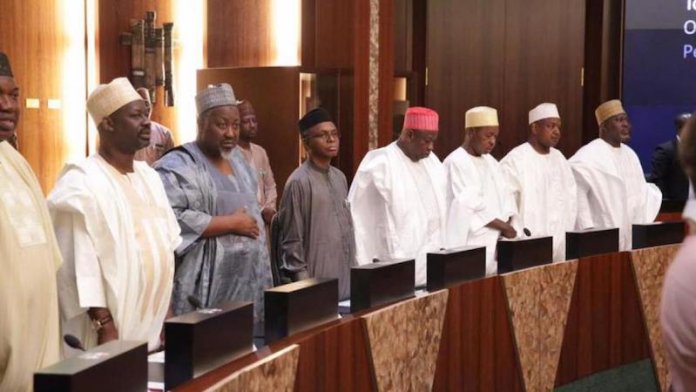 The 22 governors of the ruling All Progressives Congress (APC) have begun moves to rally necessary support for the Senate Leader, Senator Ahmad Lawan, towards his emergence as the Senate president of the ninth National Assembly.
Already, the governors had met with APC senators-elect from their respective states and told them the need to support the ambition of Lawan in line with the directive of the national leadership of APC.

A senator-elect from North-central zone told THISDAY yesterday that his state governor last weekend met with him and his two other colleagues and canvassed for necessary support for Lawan in his ambition to become the nation’s number three citizen when the ninth Assembly is inaugurated in June.

The ranking senator, who spoke on condition of anonymity, said his state governor told them at the meeting that he had strict instruction from the APC secretariat in Abuja that all senators-elect must work for the realisation of the Lawan project.
Another senator-elect from South-west zone spoke in the same vein when he told THISDAY that his state governor actually met with the two senators-elect from the state shortly before the Easter break last week.

He claimed that the governor informed them that Lawan for 9th Senate President is a task that must be done at the inauguration of the next Assembly in June.

“My governor told us that apart from voting for Lawan as the ninth Senate president, we must also be involved in the on-going consultations with stakeholders, including senators-elect from opposition Peoples Democratic Party (PDP) towards ensuring that they see reason to accept the Lawan candidacy,” the legislator-elect further said.

As part of moves to further rally support for Lawan, the APC Governors’ Forum has set up a five-man committee to meet this week in Abuja with Lawan and two other ranking APC senators, Ali Ndume and Danjuma Goje, who are also eyeing the Senate presidency.

Although Ndume has made his intention to run for the coveted office known via a two-page letter he wrote to the APC National Chairman, Mr. Adams Oshiomhole, Goje has been working underground but is yet to make public his interest although he is believed to have the support of PDP senators-elect.
The APC governors’ committee headed by the Chairman of the Nigerian Governors’ Forum and Governor of Zamfara State, Alhaji Abdulaziz Yari, also a senator-elect, will meet the three gladiators before the week runs out.

Sources told Thisday that the committee will use the opportunity of the meeting to tell the three aspirants to harmonise their position and work as a team.
The meeting, it was further learnt, will reiterate the stand of the party on the Senate presidency and ask both Ndume and Goje to queue behind Lawan, who is the preferred candidate of the party leadership.

Lawan had a fortnight ago met with some APC governors where he informed them of his ambition and sought the support of the APC governors for the project.
At the meeting attended by Governors Nasir el-Rufai (Kaduna), Abdulaziz Yari (Zamfara), Ibrahim Gaidam (Yobe), Lawan engaged the governors and told them why he is the candidate to beat for the position.

Sources told Thisday that the governors gave an assurance at the meeting to work in line with the position of the leadership of the APC after listening attentively to the presentation of Lawan.
He had also enjoyed the endorsement of APC Youth Wing that visited him last week, while in the last few weeks, Lawan had continued to engage his colleagues on his ambition.

Last week, the governor of Borno State, Alhaji Kashim Shettima, also openly endorsed Lawan.
Shettima, who is also a senator-elect and governor of the home state of Ndume, main rival of Lawan, said he was endorsing Lawan as a loyal party man since the leadership of the party had endorsed him.
During the Easter break, Lawan made personal telephone calls to the senators-elect across party lines and emphasised the need for them to key into the project by supporting him based on his pedigree having served at both the House of Representatives and Senate in the last 20 years.