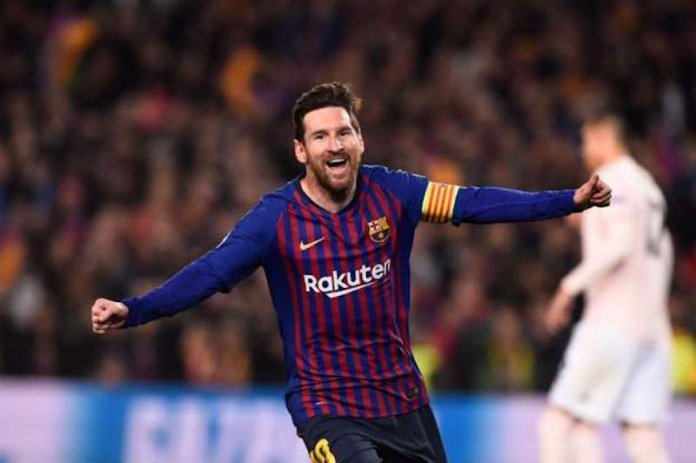 Manchester United’s Champions League run ended in the quarter-finals as Lionel Messi inspired Barcelona to a crushing 3-0 victory in the second leg at the Nou Camp.

Manchester United, trailing 1-0 from the first leg, started brightly but were then undone by brilliance from Messi and a glaring mistake from goalkeeper David de Gea.

Messi put the hosts ahead with a fine curling effort from 20 yards in the 16th minute and four minutes later De Gea let a weaker shot from the edge of the area squirm under his body for the Argentine’s second.

Philippe Coutinho added a third for Barca in the 61st minute, curling a stunning effort into the top corner from distance.

United hit the bar inside the first 40 seconds through Marcus Rashford but were dominated after going behind.

Alexis Sanchez’s diving header, which was spectacularly saved by Barca goalkeeper Marc Andre ter Stegen in the 90th minute, was as close at the visitors came in the second half.

It was a sobering night for United manager Ole Gunnar Solskjaer on the ground where he scored his most famous goal, the stoppage-time winner in the 1999 Champions League final.

Barca now meet either Liverpool or Porto in the semi-final, with the Reds taking a 2-0 lead into Wednesday’s second leg.

In Turin, Cristiano Ronaldo, a five-time winner of the tournament, headed the hosts in front from a first-half corner. However, Ajax battled level as Donny van de Beek controlled Hakim Ziyech’s shot and slotted past Wojciech Szczesny.

Ziyech went close after the break before De Ligt, up from the back, scored a decisive, powerful header.

The away-goals rule left Juventus needing two in the remaining 23 minutes, but it could have been even more comfortable for the visitors in the closing stages with David Neres shooting wide and Ziyech flagged offside after whipping a smart shot into the top corner.

As their fans twirled shirts over the heads high in the Juventus Stadium stands, the visitors ran out deserved victors.

Ajax will face the winner of Manchester City and Tottenham’s quarter-final, which Spurs leading 1-0 before Wednesday’s second leg at Etihad Stadium.