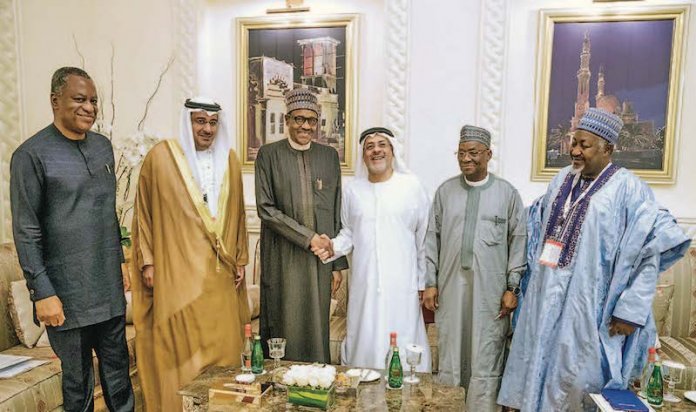 President Muhammadu Buhari yesterday in Dubai, United Arab Emirates (UAE), tasked world leaders to come up with proposals to create a digital world that is accessible, inclusive and safe to all.

The president, according to a statement by his spokesman, Mr. Femi Adesina, made the call while delivering a keynote speech at the 2019 Annual Investment Meeting (AIM) in Dubai, attended by world leaders in both the public and the private sectors

Adesina who said the president noted that a certain level of regulation was needed to preserve the integrity of the digital economy, identified theme of the summit as: “Mapping the Future of Foreign Direct Investment: Enriching World Economies through Digital Globalization.’’

According to him, the president acknowledged that digital globalisation is transforming the world almost every day with innovations and transformative ideas.

However, he said the Nigerian leader cautioned his counterparts on the threat inherent in leaving the digital world unregulated.

The statement also said the president decried the use of cyberspace to manipulate elections, subvert the democratic rights of citizens and propagate violence.

It lamented the steady rise in fake news and cybercrimes, particularly when platforms are hijacked and manipulated by criminals.

Buhari, the statement added, called for collective efforts led by both the public and the private sector leaders to address the emerging threats of digital globalisation.

‘‘Today, we have a cyber-world that is intangible but real. This borderless world is powerful, and it impacts the lives of billions of people, no matter how remote their physical locations are.

‘‘People work in it. People socialise in it. And people invest in it. This presents enormous opportunities. But it also remains a constant threat if left unregulated.

‘‘On the one hand, it has made the human race more productive and more efficient. Today, we have digital banking, virtual currencies and many social platforms that connect people and cultures.

‘‘On the other hand, we have seen platforms hijacked and manipulated as evidenced by the steady rise in fake news and cybercrimes.

‘‘More recently, we are also witnessing the use of the cyberspace to manipulate elections, subvert the democratic rights of citizens as well as propagate violence.

‘‘In effect, the digital world has become the new frontier for both good and evil. Therefore, the challenge for world leaders must be to ensure that this space is inclusive, accessible and safe,’’ the president said.

Adesina said Buhari used the occasion to reflect on digital revolution in Nigeria, which he said was buoyed by impressive statistics on mobile phone penetration, technology hubs and the advent of young entrepreneurs attracting investments of over 100 million dollars to the country.

‘‘In Nigeria, our mobile phone penetration exceeds eighty per cent. This means the majority of Nigeria’s one hundred and ninety million citizens are fully connected to this new digital world; especially our youth.

‘‘Sixty-five per cent or one hundred and seventeen million Nigerians are under the age of 25 years. These bright minds are the drivers of this emerging digital sector.

‘‘Today, Nigeria has close to ninety technology hubs and every day, new ones are coming up and they are all developing solutions for Nigerian, and indeed global problems.

‘‘Already, these young entrepreneurs have attracted investments of over one hundred million dollars – a sizeable amount from overseas, including Silicon Valley.

‘‘As many of you from this region are aware, Nigerian start-ups always have a very impressive outing at the Gulf Information Technology Exhibition (GITEX). Many have won prizes.’’

‘‘When we came in 2015, we immediately agreed that any future economic growth must be inclusive. As the Nigerian youth population is fully digitalised, it is clear that the idea of having an inclusive economy cannot be achieved without digital inclusion.’’

The statement added: “The President announced that Nigeria was working on creating the largest digital database in Africa, with over thirty million Nigerians and legal residents already captured in the country’s digital identity system.

“He said the recourse to technology and digitisation reinforces the administration’s objectives of improving efficiency, accountability and transparency in governance.

“On cybersecurity, President Buhari said Nigeria has taken the lead in cyber policing in West Africa, working with regional and global partners.”