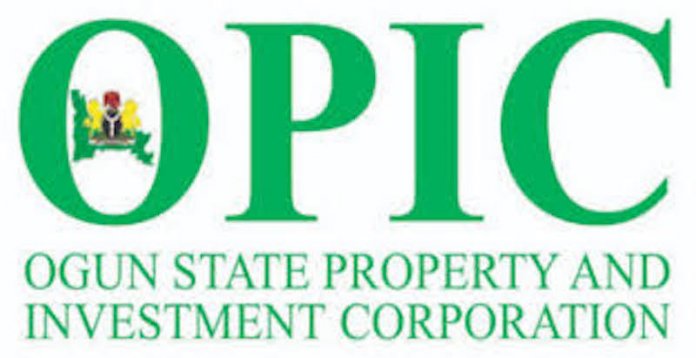 The Ogun State Property and Investment Corporation (OPIC) has used modern engineering to beat a naturally treacherous terrain at Isheri North, off the Lagos-Ibadan Expressway, where it built MTR Gardens, a sturdy high profile housing facility. The concept is to get people to invest in Ogun state, live, play and thrive there. Bennett Oghifo reports

This top-of-the-range MTR Gardens and others of its ilk like the Orange Valley Estate in Abeokuta, the mix-use New Makun City and the projects in Agbara Estate have put Ogun State ahead of others in housing delivery, thanks to OPIC, its private sector-driven housing development agency.

The whole idea is to provide homes for every class of people working in Ogun State, particularly now that most savvy business promoters are taking advantage of the investment-friendly environment in the state.

Governor Ibikunle Amosun knew the people being lured to work in the state would need homes and fast too. So, he chose a professional housing developer, Mr. Babajide Odusolu as his Special Adviser and made him the Managing Director of OPIC, and nearly eight years after, most of the homes are ready for habitation and, interestingly, without the state spending a kobo.

The first phase of the MTR Garden is ready and it has exquisite two and three bedroom flats, complete with BQ. Prospective buyers also have options of shell homes they can complete to their taste at their pace.

There is water in the estate and it is good to drink because it is extracted 520 metres deep within the earth crust and it comes out hot and fresh. It is redistributed effortlessly using unbreakable pipes to reservoirs in each block.

Buying apartments in the estate has been made flexible with payment made in installment and buyers/owners can move in after achieving 50 per cent payment. There is mortgage for those who want to take that route. A two bedroom flat is N24 million and three bedroom N32 million and the shell of both hang low.

The Managing Director of OPIC, Babajide Odusolu said they had an elaborate plan of what they wanted to achieve when they stated about eight years ago. The MTR Garden, he said was a major statement and that it was conceived in 2015 when the community where it was built told the governor they wanted some sort of reprieve from the ugly environment and from those dark figures who take undue advantage of it.

The governor sent Odusolu to see what could be done and he came up with the possibility of having an MTR Garden estate there and the community could not understand when they were told what the government intended to do with the swamp. But now, the good part is that the estate is there, standing on dry ground.

Odusolu said the sludge that was in the swamp was excavated and the soil was replaced and stabilised, and to keep the land dry, a huge drain was constructed to transport water to the river close by.

They are building over 1.5 kilometers of road network in the neighbourhood to increase the value of their property and it has been successful, he said. “When we started this project, property values were around N20,000 per sqm and that is probably because of its closeness to Lagos, but now you’ll struggle to find a property of N100,000 per sqm here, and a large chunk of it is because we have brought a lot of infrastructure and modernisation that has changed the environment.

“The whole essence of MTR Gardens is to show the new face of Ogun State. The fact that the state is ready to compete favourably with the very best that Lagos State had to offer in quality living.”

They stated this development from Abeokuta, the state capital, with Orange Valley Estate and people wondered who was going to buy the high profile homes. “We did Orange Valley in 2013, 2014 and it was hugely successful, and we went to Agbara where we did a lot of road improvement, about 20 kilometre of road infrastructure/urban renewal mainly.”

He said they thought it was necessary to address the needs of a lot of people who work in multinationals and live in Ogun state, adding that they have been able to do this with MTR Gardens that “was designed to have almost the same scale of what you have in 1004 Estates in Victoria Island, Lagos, but without the stress and the pressures Lagos has.”

The estate is powered through the national grid, generators and will later have its own one megawatt IPP before the end of the year. The second phase will have 600 housing units and the third phase, which will be done concurrently with the second, will be a commercial city that has a mall and office block and it will be built at a strategic place where it can be used by even people outside the estate.

“We are creating this holistic community for people in businesses/factory owners in the state who have no business going to live in Victoria Island or Ikoyi or Ikeja GRA, but they go there because that is where they can get the quality of life that they want. Ours is to create that here so that when they come off the plane, they will take a leisurely 10-minute drive here (MTR Garden) and from here they can operate anywhere they want. We will have broad band internet service here also.”

Odusolu said some firms have offered to take the whole units in the estate for use by their staff, but that they refused because the idea was to have an inclusive community. “The vision was that we create the quality of life, because when you talk about the economy, you must understand that the economy is driven by people. If we do not build what people need, they don’t stay. We don’t just want people to come and invest in Ogun state, we want people to invest in Ogun, live in Ogun, play in Ogun and thrive in Ogun.”