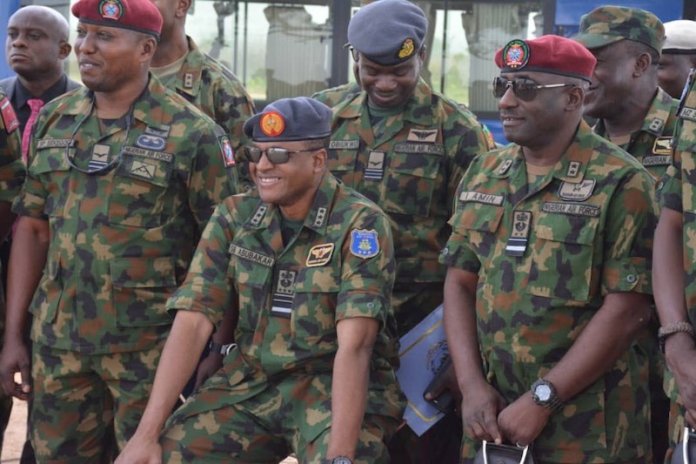 Chiemelie Ezeobi writes on the establishment of a Special Forces unit by the Nigerian Air Force to undertake covert, counter insurgency and unconventional warfare, thus bridging the gap between air power projections and force protection

According to Wikipedia, special forces emerged in the early 20th century, with a significant growth in the field during the Second World War, when “every major army involved in the fighting” created formations devoted to special operations behind enemy lines.

For the Nigerian Air Force (NAF), it is no different. Their NAF Regiment and Special Forces (SF), has in the course of four years blossomed in strength and training. The resultant effect is it’s capability in conducting specialised operations, thus bridging the gap between air power projections and force protection.

Known as the ‘Panthers’, the NAF SF are 1,000-strong well trained, kitted and motivated force capable of conducting specialised cover and counter operations in concert with sister services.

Like the panther, whom they are named after, these SF are expected to have good hearing, extremely good eyesight, and a strong will. All attributes that are expected to come to bear in real life situations.

While unveiling the new accoutrements and insignia of the NAF Regiment as well as the new nickname of the SF – ‘the PANTHERS’ at a recent gathering, the Director of Regiment HQ NAF, Air Commodore Babatunde Phillips, highlighted how the specialty had been transformed over the past four years with massive capacity building initiatives. He said that the transformation had resulted in raising the number of NAF SF personnel from less than 300 in 2015 to a well-trained,equipped and motivated force of over 1,000; along with 44 SF instructors also recently trained.

He noted that the PANTHERS, who were currently deployed for internal security operations in 14 different states across the country, would continue to be models of professionalism displaying courage, valour, strength, swiftness, agility, adaptability and tenacity in the discharge of their duties.

Already, plans have been put in motion to launch the special documentary on the activities of the special forces. In the few minutes video, which showcased

the activities of the special forces, from the simple to the outrightly dangerous, the Chief of the Air Staff (CAS), Air Marshal Sadique Abubakar, also spoke, thus giving the greenlight to the entire project.

He said: “We focused more on AirPower projection at the expense of AirPower protection, hence our decision to pay special attention to force protection training, which involves protection in critical air and ground environment personnel as well we special forces environment.”

While keeping it simple and short, NAF Director of Regiment, Air Commodore BP Philips said: “We first protect in order for the air force to force project.”

Speaking on the documentary, NAF Director of Public Relations and Information (DOPRI), Air Commodore Ibikunle Daramola said: “All is set for the unveiling of an interesting documentary on the Nigerian Air Force (NAF) Regiment and Special Forces (SF), scheduled for release later in the week, as part of events ushering in 55th NAF Day Celebrations. In the past four years, the NAF has significantly boosted the capacity of its Regiment Speciality and more than tripled the strength of its SF personnel to a 1,000-strong well trained, well kitted and well motivated force capable of conducting specialised operations in concert with sister services.

“The NAF SF, which now has a new name – the PANTHERS – as well as distinct accoutrements and insignia, have successfully bridged the gap between Air Power projection and force protection. They are currently deployed for Internal Security (IS) operations in about 14 states across the country. They have been working very closely with sister services adding value in the fight against insurgency and other forms of criminality, while also improving NAF Base Defence and force protection capability.”

The teaser for the documentary came just days after the CAS was at the Regiment Training Centre (RTC) Kaduna, for the graduation ceremony of Special Forces (SF) Course 4/2019, comprising 175 personnel; the first set to be trained by NAF SF Instructors. Expressing his delight at how far they have come in their quest to revolutionise the NAF Regiment speciality (the BULWARKS) into a formidable element of the service for the effective defence of NAF bases, as well as the protection of Nigerian Airports and other Critical National Assets, he said: “Since 2015, we have tripled the number of our SF personnel to a 1,000-strong well trained, kitted and motivated force capable of conducting specialised operations, either independently or in concert with other services”.

Disclosing that they are currently operating in internal security operations in 14 states, he said in just four years, they have successfully bridged the gap between Air Power projection and force protection, adding that their capacity building initiatives have repositioned the Regiment, SF and other NAF elements for effective defence of Nigeria’s territory and protection of Nigerians.

On his Twitter page, the DOPRI had also revealed that the event featured ‘Krav Maga’ (unarmed combat), weapon handling and Research and Development (R&D) displays, plus a simulation of coordinated assault on an enemy location by the graduating SF, adding that new accoutrements and insignias for NAF Regiment and the new name of NAF SF ‘the PANTHERS’ were also unveiled.

He wrote: “In the past four years, NAF has significantly boosted the capacity of its Regiment speciality and more than tripled its SF strength, thereby enhancing operations in the fight against insurgency and other forms of criminality while also improving Base Defence/force protection.”

In his speech at the event, Air Marshal Abubakar, said the graduands were to boost Internal Security operations in the country, adding that the 175 graduating students of SF Course 4/2019 had successfully completed the 10-week rigorous and intensive training in asymmetric warfare at the RTC, Kaduna.

Significantly, he said this is the first time in the history of the NAF that SF personnel would be trained wholly by NAF Instructors, thereby actualising one of the key drivers of the Chief of the Air Staff’s Vision of “reinforcing a culture of self-reliance and prudent management of resources”.

Before now, he said the NAF had engaged the services of an Israeli company; the Four Troops Team, to train NAF SF personnel, aside overseas’ training in various countries such as Belarus, China and Pakistan.

He further stated that in the last four years, the NAF had made deliberate efforts to reposition the service into a highly professional fighting force, with the training of over 1,000 SF personnel as part of the overall strategy for its capacity building initiatives.

While promising to sustain the training of SF personnel to enhance NAF force projection posture, while also improving its Base Defence/force protection capability, Abubakar, who expressed satisfaction with the quality of the training, noted that NAF SF personnel were making huge impacts in the fight against terrorism and armed banditry across the country.

According to him, examples of these achievements include the recent arrest of armed bandits at Birnin Gwari in Kaduna State as well as the professional conduct of NAF personnel deployed to support the Nigerian Police in providing security during the recently concluded General Elections. These performances, the CAS said, were indications that the efforts of the NAF toward building an efficient force structure, with the NAF SF as a vital component, were yielding positive results.

Abubakar charged the graduands to be prepared to do their best in all circumstances as their future assignments would require courage, good judgement and commitment. The CAS also emphasised the need for the SF personnel to rededicate themselves to duties and conduct themselves in accordance with NAF’s core values of ‘Integrity’, ‘Service before Self’ and ‘Excellence’.

He commended the Air Officer Commanding, Ground Training Command, Air Vice Marshal Idi Amin, as well as the Commandant RTC and his team of instructors for their tireless efforts in molding NAF Regiment personnel. He also assured the centre of the support of Headquarters (HQ) NAF to enable it effectively discharge its responsibility of training elite fighting personnel for the NAF and the nation.

While concluding his remarks, the CAS thanked the Commander-in-Chief of the Armed Forces, President Muhammadu Buhari, for the priority attention given to the requirements of the NAF.

He said: “The support provided by the Federal Government has no doubt positively impacted on the NAF and led to increased aircraft serviceability and availability as well as improved training and enhanced facilities.”

Earlier in his welcome address, the Commandant RTC, Wing Commander Stephen Sekegor, noted that the rationale behind the localisation of SF training was to ensure prudent management of resources while still ensuring qualitative training. He thanked the CAS for his visionary leadership which had resulted in the phenomenal enhancement of the capacity the NAF Regiment Specialty to better conduct base operations in both conventional and asymmetric warfare environments.

He also assured the CAS that RTC would continue to provide the requisite specialised training to meet the contemporary security challenges facing the nation.

Highlights of the graduation ceremony included unarmed combat, weapons handling and Research & Development displays by RTC as well as the simulation of a coordinated assault on an enemy location conducted by the graduating SF personnel to the admiration of guests. Also, certificates and awards were presented to students who distinguished themselves during the course.

The CAS also commissioned a newly-constructed SF Command Training Shed as a joint user facility for the Military Training Centre (MTC) and RTC. Present at the ceremony were the Commandant Armed Forces Command and Staff College Jaji, General Officer Commanding 1 Division Nigerian Army as well as the Air Officers Commanding Air Training Command and Ground Training Command, amongst many other serving and retired senior officers.