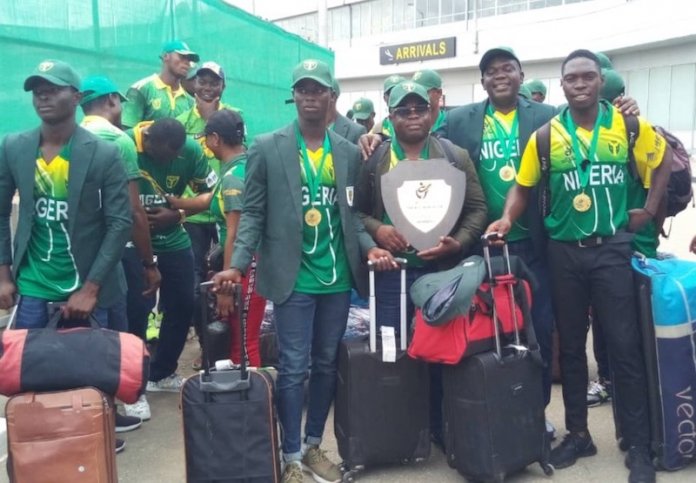 Nigeria U-19 cricket team, the Young Yellow Greens, returned to the country yesterday after their victorious performance at the ICC U-19 World Cup qualifiers in Windhoek, Namibia.

The News Agency of Nigeria (NAN) reports that the team unbeaten run at the qualifiers earned the country a slot in the ICC-19 World Cup slated for South Africa in 2020 for the first time.

The country also won the Africa Division 1 after defeating Sierra Leone, Uganda, Tanzania, Kenya and host, Namibia.
Ogbimi Uthe, Coach of the team, told NAN at the Murtala Muhammed International Airport in Lagos that the victory was a feat for the country in cricket.
He attributed the team’s success to hard work and adequate support from the Nigeria Cricket Federation before and during the competition.

“I am happy and proud of the boys with what they have been able to achieve for the country in cricket.
“Before the qualifiers in Namibia, the team was in Zimbabwe for tournament tour and that really brought the best out of them because Zimbabwe is far ahead of us in cricket.

“They faced some of the top countries at the qualifiers and were able to achieve an unbeaten run at the end of the event,” he said.
The coach said that the next agenda was to prepare the team early enough for the World Cup, adding that they want to compete with the best.
“The next thing on our agenda is preparations for South Africa 2020, we don’t want to be there for participating sake but we want to compete as well, ” he said.

Also, Silvestre Okpe, captain of the team, told NAN that he was grateful to God for the team’s performance in Windhoek.

Okpe thanked the NCF for doing everything possible to ensure a good outing for the players, urging for more support for the task ahead in 2020.
“I am excited and the team is grateful to God for giving us the victory because it was not an easy one for us.
“We appreciate the federation and we hope our performance will spur the government and other corporate organisations to support our preparation for the World Cup,” he said. (NAN)