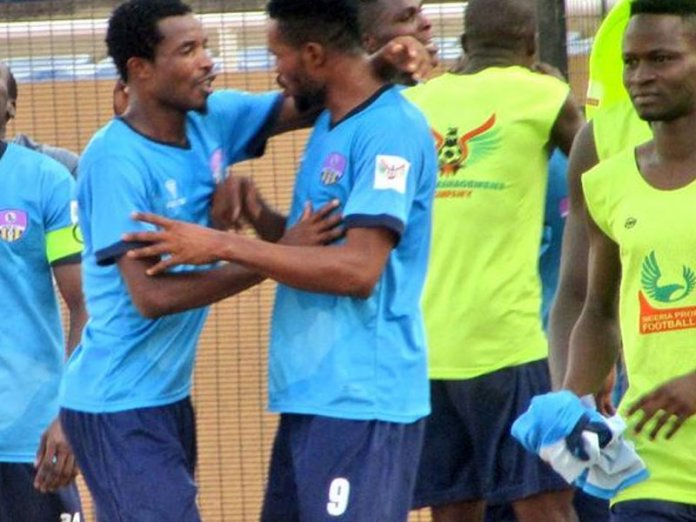 MFM FC Wednesday gained one valuable away point against Katsina United in a rescheduled Match-day 9 clash at the Muhammadu Dikko Stadium to extend its leadership of Group A of the NPFL to six points.

The Olukoya Boys were on the verge of picking maximum points from the away fixture when Chijioke Akuneto got the opening goal barely a minute before the half time break.

The hosts however fought back gallantly with Martins Usule grabbing the equaliser from a close range volley in the 70th minute.

Earlier in the game, Kastina United missed the chance to take the lead in the 17th minute when Destiny Ashadi missed from the spot.

Elsewhere in another rescheduled Match-day 8 fixture in Makurdi, Lobi Stars picked all three points with 2-1 defeat of Rivers United.

The win lifted Lobi five places to third position of the Group A standing on 14 points from seven matches. They are just two points behind Enyimba in number two position.

Sikiru Alimi put Lobi Stars ahead on the stroke of half-time firing past Drissa Bamba after he was set up by Kelly Kester. Micheal Stephen got the second in the 53rd minute nodding home Moses Bunde cross.

Cletus Emotan got the consolation goal for Rivers United 13 minutes from time.

Head coach of Lobi Stars, Solomon Ogbeide praised his charges for the effort that culminated in the win while also complimenting the vanquished opponents.

“We played, we won. The side we played, they are not a bad side. We knew we were going to play a very tactical side and we prepared too,” Ogbeide told reporters after the game.

In Kaduna, Kano Pillars recorded a 2-0 away win against Kada City with Adamu Hassan and Nyima Nwagua scoring both goals.

Abia Warriors also recorded a 3-1 away win against Yobe Desert Stars in Damaturu. Samson Obi hit a brace for the visitors with David Uduak scoring the other goal from the spot a minute after the hour mark.

While the win for Pillars lifted the Sai Masugida to fourth place of Group B Abia Warriors away victory also lifted the Umuahia team to sixth spot in the standing.