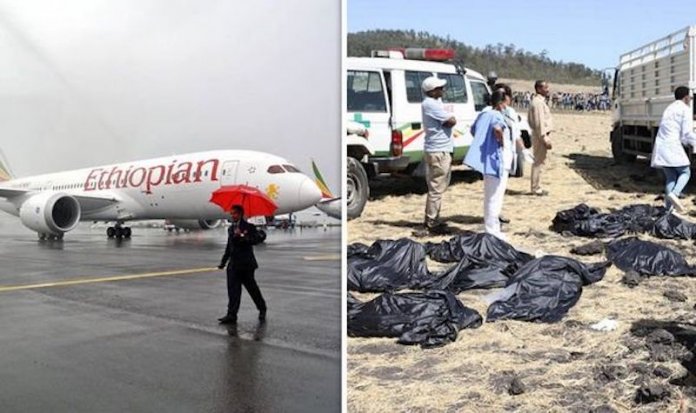 Before the Ethiopian Airlines Flight ET302 crash last Sunday, which killed 157 persons on board, the operating aircraft, Boeing 737MAX 8 was the fastest selling aircraft in its category, with about 500 orders. But with two fatal accidents in tow, what fate would befall the aircraft?, asks Chinedu Eze

On Wednesday the European Union Aviation Safety Agency (EASA) issued a statement banning the use of Boeing 737 MAX 8 in its airspace. EASA acted on behalf of 28 EU members and before then many other countries have banned the use of the aircraft.

“EASA is continuously analysing the data as it becomes available. The accident investigation is currently ongoing, and it is too early to draw any conclusions as to the cause of the accident,” the body said in a statement.

After waiting for days for the US Federal Aviation Administration (FAA) to suspend the aircraft type, the United States President, Donald Trump on Wednesday issued executive order and banned Boeing 737MAX in the country’s airspace.

Maybe, US took a cue from Canada, which looked up to FAA, but unilaterally took a decision after reviewing the preliminary report on the Lion Air Flight 610, which crashed in October, killing 189 persons. US suspended B737MAX 8 few hours after Canada made its own announcement.

These are part of the reactions to the fatal accident of Ethiopia Airlines Flight ET302, operated by B737MAX 8, which crashed on Sunday six minutes after take-off from Addis Ababa on its way to Nairobi, Kenya, killing all 157 persons on board.

The crash alarmed the world because about five months ago, the same aircraft type operated by Lion Air of Indonesia, killing 189 persons on board in a similar manner.

Also reinforcing its earlier statement, the federal government of Nigeria on Wednesday said it has banned the aircraft type from its airspace.

In response to the banning of the aircraft by other countries of the world, FAA was expected to ban the aircraft, but the body, which is the US civil aviation regulatory authority foot-dragged and even assured on the safety of the aircraft, forcing Trump to use executive order to ban the B737MAX jet.

After the crash took place six minutes after take-off ,industry pundits had linked it to the Lion Air crash about six months ago in Indonesia, operated by the same aircraft type.

The Lion Air B737MAX crashed eight minutes after take-off and after the aircraft operated a flight the previous day. The Ethiopian Airlines flight just returned from a flight before it headed to Nairobi and crashed after take-off.

By Tuesday, two days after the crash, more countries have joined Ethiopia, Indonesia, China and Camay Island to ground the operations of Boeing 737MAX8 after the crash.

According to BBC, the UK’s Civil Aviation Authority banned the Boeing 737 MAX from operating in or over UK airspace “as a precautionary measure”.

The authority said the decision was taken after “an Ethiopian Airlines Boeing MAX 8 crashed on Sunday, killing 157 people on board”, the second fatal accident involving that model in less than six months. So by that decision, UK has joined Malaysia, Singapore, China and Australia, in banning the aircraft. The CAA said the directive would remain in place until further notice.

“The UK Civil Aviation Authority has been closely monitoring the situation, however, as we do not currently have sufficient information from the flight data recorder, we have, as a precautionary measure, issued instructions to stop any commercial passenger flights from any operator arriving, departing or overflying UK airspace,” a CAA statement said.

A Tui (the airline that operates the aircraft in the UK) statement confirmed their 737 Max 8 aircraft were grounded following the CAA’s decision.

Most of the airlines that operate the aircraft type were based in the US and some of the operators issued statements saying they were comfortable with the aircraft, but travellers in other countries were apprehensive that the US airliners should not operate their aircraft to their destinations. Trump erased that anxiety with his executive order.

In fact, by Wednesday, the federal government of Nigeria, after issuing statement earlier that Nigeria did not have the aircraft type in its registry, banned the aircraft from the country’s airspace.

Suddenly one of the most sought after aircraft becomes a pariah and an abandoned child. However, there is no record that the aircraft was involved in accident in the US since 2017 it was introduced to the skies and more of the aircraft, about 74 were in service in the US.

According to reports, the 737 MAX generation of aircraft is an updated version of Boeing’s workhorse 737 twin-engine plane that has been in operation for decades. The 737 has sold more than any other jetliner in its 50-year career, but the MAX models have very little in common with the original 737s.

MAX planes are more fuel-efficient than older 737s, largely thanks to new engines, and began carrying passengers in 2017. The model comes in four different variants: -7, -8, -9 and -10, from the smallest to the largest (the -7 and -10 haven’t been delivered to airlines yet). The MAX variants of the 737 are Boeing’s fastest-selling generation of airplanes ever. The company has inked more than 4,700 orders for the variant of the single-aisle jet for more than 100 carriers worldwide. But only 241 of those planes have been actually delivered to airlines.

The MAX 8 was the first variant to be developed and to fly passengers. The plane mostly handles short-haul flights, but it has a maximum range of about 3,825 nautical miles — enough for trans-Atlantic flights from the East Coast of the US and Canada to Western Europe.

So far, Boeing is reported to have delivered 350 of the 737 MAX 8 since 2017 and has orders for 5000 more. However, as airlines in multiple countries suspend the use of the plane, it is unlikely those orders will go through.

Reacting to the accident, FAA said Boeing would “update training requirements and flight crew manuals to go with the design change” to an automated protection system called the Maneuvering Characteristics Augmentation System or MCAS. The changes also include MCAS activation and angle of attack signal enhancements.

The FAA said in the notice made public that external reports are drawing similarities between the crashes in Ethiopia and Indonesia. “However, this investigation has just begun and to date, we have not been provided data to draw any conclusions or take any actions,” according to the Continued Airworthiness Notification to the International Community for Boeing 737 MAX 8 operators.

Boeing, in a statement, also said it would update flight control systems on its 737 Max 8 commercial jetliners after the plane was involved in two deadly accidents in the past five months. This is in accordance to the directive given by FAA, which issued an advisory mandating specific “design changes” no later than April 2019.

For months Boeing has faced harsh criticism from pilot groups, which took issue with a decision to update the plane’s flight controls without detailing the changes in pilot training.

“Boeing has been working closely with the Federal Aviation Administration (FAA) on development, planning and certification of the software enhancement, and it will be deployed across the 737 Max fleet in the coming weeks,” the company wrote. “The update also incorporates feedback received from our customers.”

THISDAY has also learnt that US airlines refused to ground the aircraft in their fleet because their pilots were trained on the use of MCAS while airports in other countries were not availed the opportunity.

Although yet to be confirmed by investigation, industry experts believe that the problem that led to the crash lies in the aircraft rather than the safety of the airlines involved in the accident. Preliminary report on Lion Air B737MAX 8 crash indicated that the accident might have been caused by MCAS, which simple could be referred to as anti-stall computer system. MCAS is automated safety feature on the 737 Max 8 designed to prevent the plane from entering into a stall, or losing lift.

The major problem with the B737MAX was that the pilots who operated the two crashed airplanes might not have been informed about the dynamics of MCAS. That was noticed during the preliminary investigation of the Lion Air crash. It is likely that Boeing did not include extra training of the pilots on MCAS in the aircraft manual.

There were indications that the pilots complained about the autopilot of the two Boeing jets that crashed.

The reports said US pilots in incident reports involving Boeing’s 737 Max 8 jetliner, the same model that was involved in two deadly crashes in recent months said, “The airplane’s nose can tilt down suddenly during take-off, pilots aren’t being adequately trained on the autopilot system, and the operations manual is “criminally insufficient.”

With all these revelations about the aircraft B737MAX 8, will it be forced into extinction or will the aviation world believe in the aircraft after Boeing has updated its software on the aircraft?

Dakuku: APC Ready to Take over Rivers in 2023 Blessing Ibunge in Port Harcourt