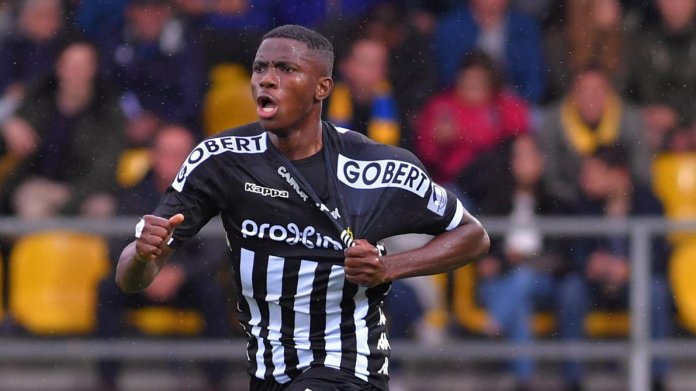 With several names, including Edin Dzeko and Higuian linked to Inter Milan in the past as a replacement for their exiting striker, Mauro Icardi, Nigeria’s Victor Osimhen is the latest name strongly linked to the San Siro giants. However, observers still have doubts as to whether the Charleroi striker is strong-hearted enough to fill the big shoe left by the Argentine

Victor Osimhen could join Inter Milan in the summer and not their city rivals AC Milan who were keen on signing him during the recently concluded January transfer window.

Osimhen has taken the Belgium league by storm this season with 10 league goals to his name for modest side Charleroi and despite the option of signing him permanently in the summer, there’s every chance of the forward leaving.

His loan deal with Charleroi has a clause agreed with Wolfsburg for him to be signed permanently for a fee in the region of €5m although his current market value is double that amount now.

Inter Milan contacted his representatives about a possible deal and it is believed that he is their prime target for former captain Mauro Icardi who is currently involved in a row with the club after he was stripped of the captain band and his relationship with the management seems to have hit rock bottom levels.

The deal for Osimhen will no doubt encounter some complications as Charleroi are willing to use every means available to trigger the clause of buying him permanently before selling him for a hefty profit and also a percentage of his future sale.

Wolfsburg, on the other hand, want the striker back after his loan spell but it is believed they want to trade him off as their player to recoup some of their investment in the player they signed in 2015 following his exploits at the U-17 World Youth Championship.

Super Eagles youngster has revealed the secrets behind his incredible form on-loan at Belgian club Charleroi since arriving Belgium from VfL Wolfsburg.

His impressive form earned him a recall to the Super Eagles squad for the 2019 Nations Cup qualifier against South Africa and he also started in 0-0 friendly draw against Uganda in Asaba.

“My confidence level was very low at some point and what going out on loan to Charleroi has done for me is unexplainable,” Osimhen told BBC Sport.

“The football in Belgium has helped, I also have a wonderful group of players around me and the coaching crew have been great with me.

“As a young player, you hear people comparing you to other stars who emerged from the U-17 World Cup and never fulfilled their potential.

“But now at Charleroi I have comfortably found my happiness again, and I thank everyone in Belgium and at Wolfsburg for the opportunity and support.”

Osimhen was the top scorer as Nigeria clinched a fifth U-17 World Cup title in 2015 with 10 goals in Chile, which saw him win the Golden Boot and Silver Ball.

“I am still young and I think it wasn’t meant to be, but I can still look forward to the future,” he added.

“I thank coach Gernot Rohr for the opportunity to return to the squad and I hope to keep working hard to stay in his plans.”

On the back of his impressive performance at 2015 U-17 World Cup with the Nigerian emerging the top scorer to claim both the Golden Boot and Silver Ball, the attacker joined the former German Bundesliga champions.

However, the 19-year-old failed to settle into the Wolves’ senior set-up amid injury struggles and was shipped on loan to Charleroi this summer.

Since moving to Belgium, the youngster has rediscovered his form, scoring seven goals in 12 outings across all competitions.

The rise to prominence of Osimhen looked set to address a long-standing problem of Nigerian football: the lack of a dead-eye centre-forward . Not since the passing of Rashidi Yekini, the famed Super Eagles goleador has there been anything close to a sure thing, a player with the ability to ruthlessly home in on goal.

A move to Germany always seemed a problematic fit, as Wolfsburg, whom he joined, are lacking in stability, and have been for quite a while. The constant upheaval, both managerially and administratively, would provide no kind of proper environment for fostering a promising young player.

It seems now as though the intervening period has been rather wasted, as has some of his lustre. The German side were eager to farm him out in the summer, and he suffered the indignity of a number of trials in Belgium and the Netherlands, before finally earning a loan move to Charleroi.

Not the most auspicious of clubs then or even manner of arrival, given his promise and the fact that he was still only 19.

That is not to say that Osimhen is that good; merely that he may be ready now to lead and if flights of fancy are acceptable, then how far off an invitation to the senior national team is he?

Rohr extended invitations to him in his early days as Super Eagles boss, all the ,while the 19-year-old was barely getting minutes at Wolfsburg.

There really is something there and while there are still a few rough edges, the diamond is just starting to peak out.

What is however not clear is if he could stand the pressure of filling the vacuum left by the Icardi at Inter Milan.