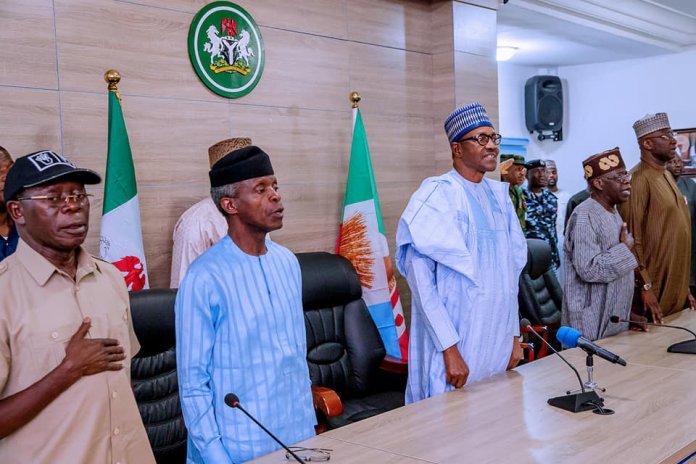 The National Leader of the All Progressives Congress (APC), Ahmed Bola Tinubu, and the governors of Bauchi, Kogi, Nasarawa, Osun, and Niger States have congratulated President Muhammadu Buhari for his re-election in last Saturday’s presidential election.

In his congratulatory message, Tinubu described the presidential election as a fair and honest exercise that permitted the full expression of the sovereign will of the Nigerian people.

The former Lagos State governor said in re-electing President Buhari, the people had shown that the president believes Nigeria should move forward to its better future instead of returning to the mistaken ways of the past.

To Nigerians, Tinubu said: “You have chosen victory over defeat, hope over despair, prosperity over poverty. You have elected the path toward a greater Nigerian instead of that toward our lesser selves”.

“With this election, Nigeria signals to the world our unalloyed embrace of democracy and our unflinching determination to perfect this democracy. While this election was free and fair, we also must acknowledge the isolated incidents of violence. Nigerians were killed and injured during what otherwise was an exemplary democratic procession. Such things should never happen and do us no good,” he said.

He charged the country to work even harder to ensure that the March 9 governorship and state assembly elections are devoid of such unfortunate incidents.

Tinubu stated that Nigeria is stronger today under the leadership of President Buhari who he said has continued to lay the critical reforms that constitute the foundation for durable, broadly-shared economic development.

“President Buhari has marked progress against the terror of Boko Haram. In his second term, he will continue to install peace where there is unrest and violence and he will not cease in this task until Boko Haram and its evil brethren are no more. He will continue to battle corruption head on. Given the president’s fortitude and determination, I know corruption will lose this battle and receded from being a major factor in our public arena,” he said.

Tinubu congratulated the APC and Buhari, saying with the president at the helm for four more years, the country would achieve greatness.

“More importantly, congratulations to the Nigerian people for the wisdom and courage shown in deciding that the best of Nigeria still resides in our future and that President Buhari is the man you best trust to lead us into that future. Posterity shall reward you for what you established on election day,” he added.

On his part, the Kogi State Governor, Yahaya Bello, said the re-election of President Buhari and Prof. Yemi Osinbajo, marks the watershed moment of the 2019 general election.

According to him, “the voice of the people is the voice of God. Our people have resoundingly insisted that while change must now make way for progress, the APC still remains their preferred driver for the journey ahead.

“We as government have done our best to complement your aspirations by placing the credibility and integrity of the electoral system above any desires to win every contested seat, and by all available means,” the governor said yesterday.

In his message, Governor Umaru Tanko Al-Makura of Nasarawa State said the state has finally broken the jinx of President Muhammadu Buhari’s “no-winning syndrome” in the state, culminating in his last Saturday’s victory since 2003.

Addressing supporters of APC who were in Government House, Lafia, to celebrate with him over his victory as senator- elect, the governor said that he lacked words to express himself because the state has broken the jinx in its political history.

He said: “Today I am happy that Mr. President has won Nasarawa State because the state, being a state that is cosmopolitan and infiltrated by all kinds of differences, has become a very difficult state to deliver, especially on the exercise like this because of sentiments of emotions and other things.”

“But since the beginning of political dispensation in 1999, we have not seen election that has become a game changer; a decisive factor in killings and burying politics of sentiments, emotions than the emergence of President Buhari as the winner of the presidential election in Nasarawa State.”

Describing Buhari’s victory as well-deserved, Oyetola told journalists that “the outcome of this election shows that President Buhari has done very well and his victory gives hope for our democracy.”

Oyetola spoke at the Government House in Osogbo while reviewing the outcome of the presidential election.

In his own message, the Niger State Governor, Abubakar Sani Bello, described the victory of President Buhari as “well deserved”

The governor said in a statement signed on his behalf by his Chief Press Secretary, Jibrin Ndace that “the re-election of President Muhammad Buhari is an indication of the trust and confidence reposed in him by Nigerians to move the country to the next level”.