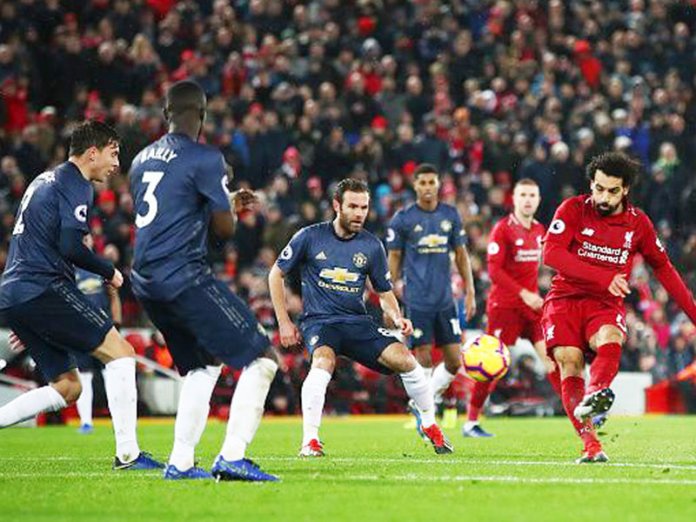 Manchester United host Liverpool today, hoping to put a dent in their bitter rivals’ push for a first league title in 29 years.

Between then – when Liverpool were by far the preeminent team in England – and now, United have been champions 13 times, in the process usurping their rivals to become the number one team in England with 20 league titles to the Reds’ 18.

Knowing this, Liverpool manager Jurgen Klopp says his side will do everything they can to get a result today.

The Merseysiders travel to United sitting second in the Premier League, but with this afternoon’s clash being their game in hand on leaders Manchester City, the Reds will go back to the top of the table if they avoid defeat at Old Trafford.

“It’s a big one,” said the German. “They are in a good moment, physically strong, defend and attack well. Full of confidence. We will try everything to get a result there.

“They’re full of confidence, that’s clear. We will go there as good as possible prepared. You never know. It’s open until the final whistle. We try and use that time.”

However, United are going for a 12th win in 14 matches in all competitions since Ole Gunnar Solskjaer replaced previous manager Jose Mourinho in December.

In fact, United remain unbeaten in nine league matches, having last tasted defeat at Anfield in December – a 3-1 loss that brought the end of Mourinho’s reign.

And Solskjaer knows all about eagerly-anticipated encounters with Liverpool.

“I’ve played in a few of these myself and I know the magnitude of it for the fans, for everyone who works here, the staff,” said United’s caretaker boss.

“There have been many comments about, ‘this is the big one’ and ‘we’re looking forward to this one’.

“Then it’s our job to be focusing and channelling all that energy into performance mode. It’s not about emotions.

“I understand that emotion can be brought into it, but we have to stay focused and controlled but with some fight in us as well.”

Anthony Martial and Jesse Lingard could return for Unoited today. The duo were expected to be out until early March with injuries sustained against Paris Saint-Germain, but both may be available for Liverpool’s visit, with Solskjaer more optimistic about Martial (groin) than Lingard (hamstring).

Liverpool will still be missing the likes of Dejan Lovren (hamstring), Joe Gomez (ankle) and Alex Oxlade-Chamberlain (knee) with injury, but Virgil van Dijk does return after being suspended for Tuesday’s Champions League draw with Bayern Munich.

Liverpool won the reverse fixture 3-1 and are looking to do the league double over Manchester United for the first time since 2013-14. They’re already the side to do the Premier League double over the Red Devils more than any other in the competition (4).

Only Manchester City and Chelsea (6 each) have won more Premier League away games against Manchester United than Liverpool (5).

Manchester United are on the longest current unbeaten run in the Premier League (W8 D1), and their longest run without defeat in the competition since October 2017 (10 games).

DStv and GOtv viewers can choose between the United-Liverpool game or the Arsenal-Southampton match, both starting at 3:05pm. The Gunners are looking to avenge their surprise 3-2 defeat at the hands of Southampton from December 2018.