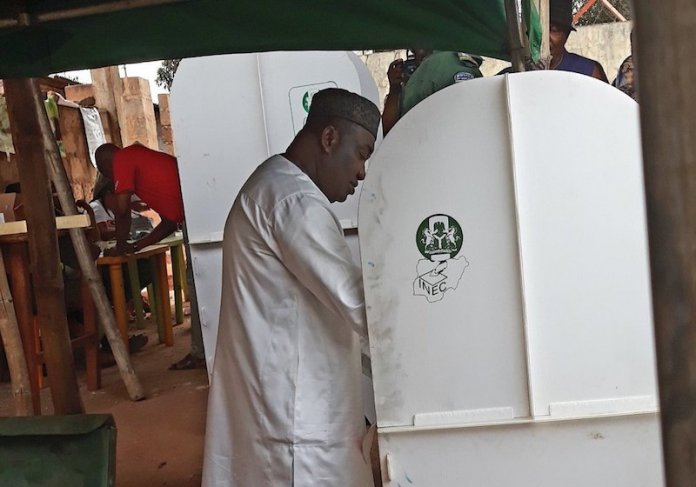 By Christopher Isiguzo and Gideon Arinze

Governor Ifeanyi Ugwuanyi of Enugu State and the Deputy Senate President Ike Ekweremadu have described the large turout of voters as encouraging, saying the process was calm, peaceful and orderly.

Ugwuanyi, who spoke to newsmen shortly after voting in his Orba polling unit in Udenu Local Government at exactly 10.02am, simply said: “Enugu is in the hands of God.”

On his part, Ekweremadu, who is also the Peoples Democratic Party (PDP) candidate for Enugu West senatorial zone, expressed delight with the smooth process as at the time he cast his vote at 10.25am at his Mpu polling unit in Aninri Local Government.

He however regretted that voting was yet to start in some of the polling units, citing network-related challenges with the card readers, incomplete ballot papers in some units and complete lack of ballot papers in other areas.

He said that at Umuabi in Udi council, result sheets which were formally missing were found in the bush.

He expressed satisfaction with the security situation at the polls.

“So far, we can see that the people are orderly and everywhere is calm. We hope to have a trouble free polls,” he said.

On whether he believes INEC will do a good job, he said: “Let us do a wait-and-see game. We just started. Maybe, in the next one hour, we shall be back to see what is happening.”

Meanwhile, as early as 7am Saturday movement was restricted

Checks by THISDAY showed that there was heavy security presence across the 17 councils in the state.

Journalists and election monitors’ vehicles were thoroughly searched by soldiers.
Security is very tight with roadblocks mounted on major highways and interstate roads.