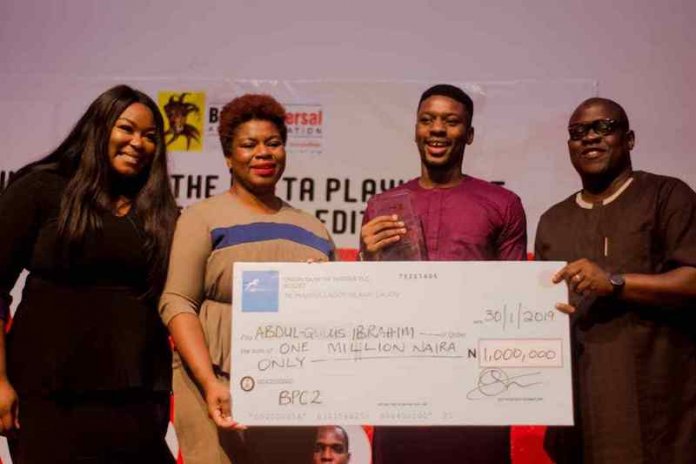 Agip Recital Hall Onikan, Lagos was a beehive of activities, as theatre practitioners and budding playwrights met for the grand finale of the second Beeta Playwright Competition.
From the foyer to the stage, the drama took different shades in forms of camaraderie and a medley of drama presentations drawn from some of the plays written by the finalists.

Sponsored by Union Bank of Nigeria, the competition empowers new voices in the theatre by identifying raw talents and refining these through a series of workshop. In the welcome address by the founder, Beeta Universal Arts Foundation (BUAF), Bikiya Graham-Douglas, she revealed that 348 entries were received from 30 states in Nigeria.

“Our judging panel once again chaired by Professor Ahmed Yerima included industry experts such as Ego Boyo, Ago Jaiyesimi, Shuaibu Husseini, Kenneth Uphopho and Ibiso Graham-Douglas,” she said.
According to her, the competition strengthens the value chain in the performing arts industry in Nigeria, empowering writers, directors, actors, students and other professionals in the ecosystem.
“At Beeta, we are passionate about telling organic contemporary stories and understand the responsibility that comes with this,” she declared.

After a rigorous search, ten finalists were selected and they were all seated in the auditorium in time for the ceremony. The 2019 finalists include Shehu Zoch-Soch for his play, Tick Tock More Talk; Kelvinmary Ndukwe for Transparent; Abdul-Qudus Ibrahim for Jagagba; Ekpeno Ukut for Room 7; Joshua Alabi for Beyond the Wig; Ruhee Ojigbo for Mr. Macaroni; Kehinde A remote for A Love Like This; El Osas Iyalekhue for Sharky Boy; Adenike Olokunbola for Echoes of the Drum; Elias Ozikpu for Queen Akwadze.

Ojigbo emerged as second runner-up; Alabi was announced as the first runner-up while Ibrahim won the competition. Interestingly, both the first runner-up and the winner were finalists at the previous edition of the Beeta Playwright Competition.
Alabi, who is one of Nigeria’s finest theatre exports to the Europe, missed out on the workshop for this edition due to international commitments. Still, he was elated to have made it to the top two position.

“I feel like screaming but I don’t want people to feel like something is wrong with me,” he said. I’m happy because not many organisations in Nigeria are doing this. Science, Technology and Mathematics usually get all the attention but this is ‘just’ writing and it is such a big step.
“I am just meeting all the finalists today although I have read the synopsis of their plays. There is something writing can do to the world. It has a way of changing. My play, Beyond the Wig is about rape, incest and other sexual violence and how our society is trivializing it.”
The winner, Ibrahim was surrounded by cameras and friends as he basked in the euphoria of being a winner at his second time as a finalist at the competition.
“I’m so excited. This is so amazing. When I got called, I couldn’t believe it. When you have a dream, keep believing it. Don’t give up on your dream,” he said.
Incidentally, the winner of the previous edition, Paul Ugbede recalled how he came to Lagos in 2015 to chase his Nigerian dream when he learnt about this competition and made a submission that won. He had recently been on the shortlist for the African Playwrighting Competition.