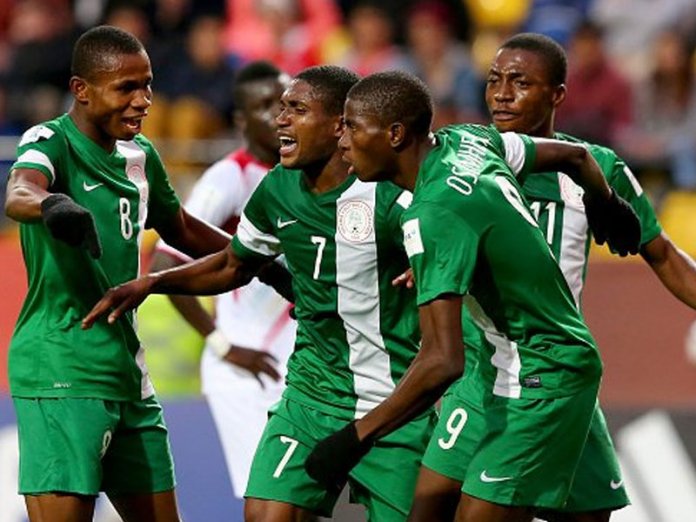 Flying Eagles’ dream of winning a record eight Africa Under-20 Africa Cup of Nations varnished Wednesday after Aniekeme Okon blasted his spot kick against the crossbar in the semi final of the 2019 edition in Niamey, Niger.

Both Nigeria and Mali had ended regulation and extra time 1-1 to warrant penalty shoot out to decide who grabs the ticket to the final.

But it was Mali’s El Bilal Toure who converted his final kick to send the Malians through to their second final on 4-3 scoreline.Valentine Uzornwafor earlier also lost his kick in the shootout.
It was a sweet revenge for the Malians who had lost to Nigeria in the semifinal of the Under-20 WAFU Cup in Togo last December.

The Flying Eagles will now play the losers’ final on Saturday against the losers of the other semifinal between Senegal and South Africa.

Group A winners Flying Eagles started brightly, imposing their preferred short passing approach on the match and eventually finishing the regulation time with 63 per cent of the possession in their favour.

The Flying Eagles wore black armbands in honour of former Secretary General and Board Member of the Nigeria Football Federation, Chief Taiwo Ogunjobi who passed away on Monday, and the match started with a one –minute silence in honour of the departed football administrator as the Confederation of African Football acknowledged the stature of the former Nigeria international defender.

Nigeria’s romance with the crossbar started in the 3rd minute, when Abubakar Ibrahim’s pull-out was diverted to the Malian crossbar. A minute later, Alhassan Adamu’s free kick was tipped over and then, Jamil Muhammed’s teasing pull-out was headed over the bar by Yahaya Nazifi.

In their determination to accomplish a second target of winning the championship trophy, after a first objective of earning a World Cup ticket was achieved with a place in the semi finals, the Flying Eagles launched onslaught after onslaught and created opportunities, but lacked that vicious marksman who takes no prisoners.

Mali goalkeeper Youssouf Koita was also in inspired form, stopping shots and headers, most notably an incredible double save in the 43rd minute when the Nigerians thought they had beaten him.

Mamadou Traore gifted Mali the opener in the 78th minute, lashing home from a swift counter attack as goalkeeper Olawale Oremade went to the ground too early.

Substitute Pascal Onyekachi restored parity, blasting home from a loose ball. There were no clear-cut opportunites in the extra time of 30 minutes.