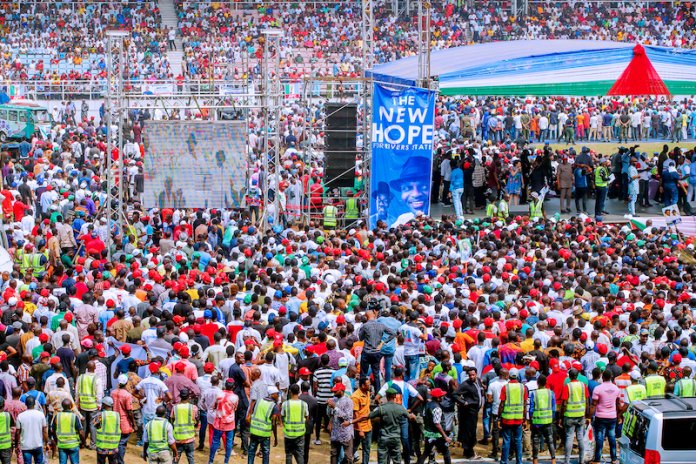 What started and ended as a colourful rally turned tragic as no fewer than nine persons were feared dead while four others were injured in a stampede at the pedestrian gate of the Adokiye Amiesimaka Stadium, Igwuruta-Ali, Port Harcourt at the end of the presidential campaign rally of the All Progressives Congress (APC) yesterday.

This is coming as President Muhammadu Buhari yesterday reassured that he is all out for free, fair and credible elections starting on Saturday.

This is coming as the Director General of Buhari re-election Campaign Organisation, Chibuike Amaechi, accused Rivers State Governor, Nyesom Wike, of lobbying to be returned as governor for a second term.

In response to Amaechi’s threat, Wike has called on Nigerians and the international community to hold the APC and the minister of transportation responsible for any outbreak of violence during the forthcoming elections.

The stampede occurred at the end of the rally when people were rushing out of the stadium through the pedestrian gate.

Some people fell to the ground and were trampled upon by other persons trying to exit from the gate.

He said the remains of the dead had been deposited at the University of Port Harcourt mortuary while the injured persons were also taken to the same hospital for treatment.

The deaths added to the gloom of most members of the party following the Supreme Court judgment which confirmed that the APC could not field any candidate in Rivers State in the elections which start this Saturday.

The National Chairman of APC, Adams Oshiomhole, said he would not present the party’s flag to its governorship candidate, Tonye Cole, during the rally

The factional Governorship Candidate and Senator Representing Rivers South East Senatorial District in the National Assembly, Senator Magnus Abe, was at the rally but was not recognised.

Speaking at the rally, the president also stated that his administration would remain steadfast and consistent in its fight against corruption.

“Our objectives are very clear. We will remain steadfast and consistent in our fight against corruption. We will continue in our effort to revolutionalise our agricultural sector.

“Nigeria will remain one united country and we will be fair and just to all sections of the country. We will remain accountable to God and you as we continue to serve you as President.

“Let all Nigerians have the faith we will be fair to all and we will not allow any constituency in this country to be intimidated.”

Amaechi said: “Whatever PDP wants in Rivers State, we are equal to the task. In 2015, the army tried to arrest me as a sitting governor. Now, we have a governor who is trying to negotiate with us, asking us to give him governor and in return, we will support us for President. He is afraid, isn’t it? We will battle him till the last.

Also speaking at the rally, Amaechi, accused Wike, of lobbying to be returned as governor for a second term.

“Whatever PDP wants in Rivers State, we are equal to the task. In 2015, the army tried to arrest me as a sitting governor. Now, we have a governor who is trying to negotiate with us, asking us to give him governor and in return, we will support us for President. He is afraid, isn’t it? We will battle him till the last.

“On Saturday, we are ready for them. They used Federal and State institutions against us. They used to kill our people every day. Because they want to deny us the right to choose our leaders, they ran to a state High Court judge to give them judgment. Saturday is our day.”

In another development, President Buhari yesterday visited Yenagoa, Bayelsa State where he assured that he is all out for free, fair and credible elections starting on Saturday.

He spoke at a meeting with traditional rulers at the secretariat complexes of the Councils of Traditional Rulers of the two states.

In a statement by the Senior Special Assistant on Media and publicity, Garba Shehu, the President said: “I assure you that I’m all out for free, fair and credible elections. The Independent National Electoral Commission, (INEC) knows my stand on this.

In a related development, the Rivers State Government has called on Nigerians and the international community to hold the APC and Amaechi, responsible for any outbreak of violence during the forthcoming elections.

The call was made in a statement issued yesterday in Port Harcourt by the state Commissioner for Information and Communications, Mr. Emma Okah, in reaction to the threats of violence issued by Amaechi.

“This threat is deeply frightening and all well meaning Nigerians and indeed members of the international community should take note of this threat from high quarters which the world heard directly or live on Channels Television, right before President Buhari and yet nobody reprimanded him” Okah said, pointing out that unless the federal government takes preventive action, Amaechi will carry out his threat using some conscripted security agencies and innocent people may die in the process.

Okah regretted that instead of using the platform of the campaign rally to woo the people in the state who he governed for eight years, the transport minister opted to visit Rivers people with aggravated violence and war. What more can be worse than a hate speech than this?

“It is indeed more frightening that while the president has repeatedly assured Nigerians and the international community of free, fair and peaceful elections in 2019, an appointee of the president would brazenly threaten bloodshed in the presence of the president and other APC chieftains and yet nobody cautioned him.” Okah said, noting that this threat is a confirmation of earlier accusation that the transport minister was promoting procurement of arms and ammunition and handing same over to criminals while enlisted security agents would supervise and give covering fire to their violence during the elections.