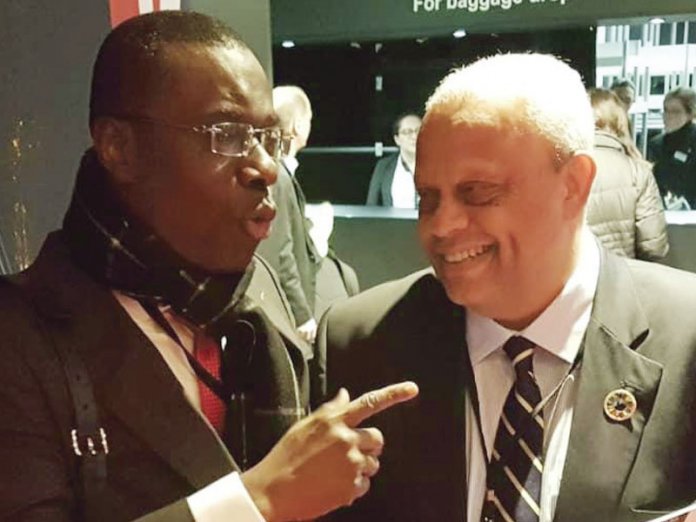 The Lagos State gubernatorial candidate for the All Progressives Congress, Mr.
Babajide Sanwo-Olu, through his development plan intends to work with both foreign and domestic investors to unlock the immense opportunities in state, writes Oluchi Chibuzor

Lagos state remains the economic hub of Nigeria. The state’s Gross Domestic Product (GDP) is estimated at $91 billion, which is higher than that of 42 countries in the continent and equivalent to that of 19 African countries added together.

With an average monthly Internally Generated Revenue of about N34 billion, how Lagos State manages its resources has national implications in the country.
Therefore, the state must have a holistic plan to remain attractive to investors both at home and abroad.
That is why the Lagos gubernatorial candidate for the All Progressives Congress, Mr. Babajide Sanwo-Olu, through his five pillars development agenda aims to enhance development in the mega city.

For instance, the Lagos gubernatorial candidate who attended the recently held World Economic Forum Davos, Switzerland, at the annual meetings, had highlighted the enormous investment opportunities in Lagos State at an exclusive session with selected Swiss Investors.

At the event, the business interaction triggered commitments of $5 billion investment in infrastructure and capital projects in the state and also provided an avenue for Mr. Sanwo-Olu to further reinforce the investment opportunities in the state.

In reassuring them, Sanwo-Olu told the investors that Nigeria is safe for investment and Lagos State as the economic nerve center of the country presents the best environment for global investments.
Sanwo-Olu said “There is progressive leadership and stability in the governance of Lagos State since 1999. The state has been under the administration of a party, my party, which is the All Progressives Party for more than 16years. The state has remained a reference point for infrastructural development and economic prosperity in Nigeria and West Africa.

“On investors’ protection, I think that should be the least of your worries. Lagos has a comprehensive regulation that protects and shields investors. The scope of the regulation covers disputes resolution and commitment to ease of doing business.”

Earlier in his speech, Sanwo-Olu informed the investors about his determination to transform Lagos into a 21st century economy.

According to him, Lagos economy is adjudged to be the fifth largest in Africa and is not yet a 24-hour economy, where you can do every transaction round-the-clock, do you think we have really maximized the potentials of that economy?
“We are saying it is a large and growing economy, and you are not playing in it yet,” he added.

“We have particular interest to support health system in Lagos. Global Fund is an important partner of the Nigerian government where we are funding support for HIV/AIDS, Malaria and other diseases,” Faria said.
Some of the multilateral institutions and private organisations that attended the session were Global Fund, Ford Foundation, HSBC, GENII Capital, International Trade Centre, Actis/CDC among others.

Sanwo-Olu and his running mate, Dr. Obafemi Hamzat recently unveiled their development agenda for the state ahead of the March 2nd gubernatorial election.
Tagged project THEME, the five pillars of development is expected to focus on traffic and transportation, health and the environment, education and technology, making Lagos a 21st century economy, as well as entertainment and tourism, among other issues.

Unfolding their plans, both Sanwo-Olu and Hamzat said project THEME, as a strategy was conceived after wide consultations with all stakeholders on the challenges and the future Lagos state.

“We didn’t just prepare the THEME documents in our bedrooms or in one hotel or inside a board room. The documents came from our numerous engagements with the people of Lagos State, telling us what their needs are and the immediate intervention they require on any challenge”, Sanwo-Olu stated.

While unveiling of “A Vision for a Greater Lagos,” which was attended by the party leaders, captains of industry, artisans and supporters, Sanwo-Olu further stated that he and his deputy are convinced that in spite of many achievements in governance of Lagos since 1999, there is still much to be done to fully realise the potential of the state.

Speaking on Traffic Management and Transportation, the APC standard bearer said he has identified about 60 traffic gridlocks in the state and that gridlock red spots in some parts of the state such as Third Mainland Bridge and Lekki-Ikoyi/Admiralty Way and Lekki Toll Plaza, among others and that it would be resolved within nine months of his administration, saying “we promised to implement a more effective public transport system, reactivate the rail system, extend water transport services, expand and improve network of roads.”

On Health and Environment, Sanwo-Olu promised to ensure the presence of minimum of three doctors, three nurses and five community health workers in all 354 Primary Health Centre (PHCs) by 2021 and provide 10 new PHCs for riverine and other underserved areas, adding that his government would optimize waste management, improve drainage and disposal of wastewater across the metropolis.

Speaking on “Making Lagos a 21stCentury Economy,” the APC Gubernatorial candidate said the administration will create a conducive business environment to attract investments and industries, support the growth of the local economy, empower the workforce using local talent to drive job and wealth creation, encourage youth development and provide support for key economic sectors like agriculture, housing and security.

On his part, Hamzat, while speaking on the plan for education and technology said the incoming administration would introduce measures to address three broad issues, namely: students, teachers and school infrastructure, adding that government would invest heavily in developing a strong pool of talented and well-trained young people to drive economic development.

“We want to assure Lagosians that there would be increase budgetary allocation for education from 12.07 per cent to 18 per cent during the tenure of our administration if we win the election. Besides, the state government will collaborate with industry, federal government and academia to update the education curriculum to reflect current and future industry needs,” he said.
As for the Entertainment and Tourism sectors, Hamzat said the administration’s desire is to make Lagos the foremost entertainment and tourism destination in Africa.
“As such, our government will work with stakeholders to facilitate the creation of a fully equipped and functional film city that will include an academy to encourage skills training”, he said, adding that their administration will develop sports as a viable economic platform with the introduction of a new sport policy.
“We will galvanise grassroots participation in sport and revive periodic community sports competition, street sports championship and community shield periodically to promote wellness, community spirit and generate employment,” he added.

Already, the International Trade Centre (ITC) has pledged its support for Lagos State.
The Executive Secretary, ITC, Ms. Arancha González, made the disclosure during an interaction with Sanwo-Olu in Gevena.
The engagement was an extension of the gubernatorial candidate’s consultations with critical stakeholders and international organizations that could support the attainment of his vision for a greater Lagos.
Specifically, Sanwo-Olu, had stressed that excellent delivery of socio-economic programmes to residents of a cosmopolitan city like Lagos would require more than willingness on the part of the government, but also the support of world-class human-centered organisations in the areas of frameworks, templates, collaborations, trainings and insights are critical to the success of his vision for Lagos.
“We have a vision to make Lagos a 21st century economy. This is an exciting aspiration targeted at transforming every aspect of Lagos life. We know that beyond the huge infrastructural requirements and regulatory framework revision, there are also significant human capital development needs that will support the success of this goal. Hence, our call for support by notable global organizations like the International Trade Centre with impressive track-record of helping growing economies,” said Sanwo-Olu.

In her response, González, said “the ITC’s goal is to help developing and transition countries achieve sustainable human development through exports, adding that it is also a development partner for small business export success.”

“Lagos is an important city in the world, and because of our commitment to economic development and wellbeing of mankind, we are always inclined to support human-centered programmes. It is pleasing that health, environment, education and technology are some of the focal areas of your agenda because these elements are major items of discussion in the modern world,” said González.

Sanwo-Olu had said Lagos in future would be in a position to host the WEF.
“By hosting the WEF in Lagos, business and political leaders from across the globe will see potentials of our state, provide advice and insights into how to transform the state into a 21st century economy, and attract investors through business-friendly policies to the state”, enthused Sanwo-Olu.

Accordingly, Lagos State may soon become a convergence point for political and business leaders across the globe following Sanwo-Olu’s quest for rapid socio-economic transformation. The APC gubernatorial candidate has obtained the commitment of the ITC to facilitate and support the hosting of the World Economic Forum in Lagos in future if he won his election to become the Governor.
In the same vein, the Swiss Agency for Development and Cooperation (SDC) has said it will continue to work with developing nations and sub-national governments such as Lagos State to reduce poverty and increase standard of living through support for education, climate change, health and skill development.

Ambassador Ralph Friedlander of the SDC, said Switzerland is a leading country in promoting small businesses through skill acquisition and vocational training and would be ready to work with Lagos State to help develop the right skills for young people to acquire right skills for economic productivity.

“I have seen your areas of focus in your development agenda. Education, health and economic opportunities to lift the poor out of poverty through skill development are areas where we have expertise. We will work with you. Nigeria and Switzerland have solid relationship and we will continue to strengthen that through our work with the central government and we will work with state Lagos State,” he added.

For S.T. Ola Akande, a Eulogy