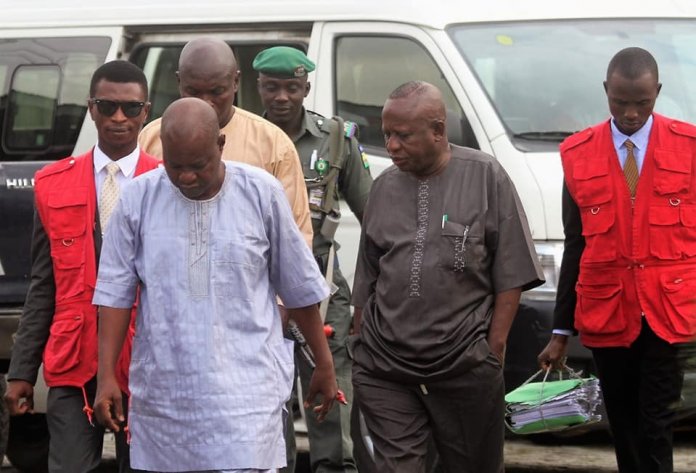 The court presided over by Justice Mohammed Idris, had on Thursday, convicted the two former INEC officials on a nine-count charge levelled against them by the Economic and Financial Crimes Commission (EFCC).

The convicts were first arraigned before the court on May 5, 2017, on charges bordering on conspiracy, money laundering and obtaining huge amount without going through financial houses.

Justice Idris, however, reserved sentencing the convicts till yesterday due to the absence of the first convict, Nwosu, who was said to be on admission in a hospital.

At the resumption of the matter yesterday, the convicts’ lawyer led by Victor Opara, in his allocutor, pleaded with the court to tamper justice with mercy as their clients are first time offenders.

He also urged the court to consider reformatory sentence instead of custodian sentence to their clients.

Opara further urged the court to considered the 35 years which the convict had served the country.

He also told the court to consider Sections 305(1)  paragraph 6 of ACJA, which prescribed that the court should pass its sentence on the convict but such sentence should be suspended pending the out come of an appeal filed against the charges.

In response, the EFCC lawyer, M. A. Idris, while informing the court that though, the convicts are first time offenders, he urged the court to pronounce the sentence as prescribed by the law.

Idris also informed the court to order the forfeiture of the money and properties recovered from the convicts to the federal government.

After listening to both parties, Justice Idris, sentenced the convicts to a total of 64 years imprisonment without option of fine.

The judge also ordered that all the landed properties recovered for the convicts be forfeited to the federal government.

In sentencing the convicts, Justice Idris said: “I have listened to the plea of allocutors made. The convicts are or were officials of INEC and expected to conduct themselves as impartial umpires in the carrying out of their activities.

“I understand the mission of INEC to be to serve as an independent and effective election management body, that is committed to the conduct of free, fair and credible election to the sustainable of our democracy in Nigeria.

Its vision is to be one of the best election management body in the world that meets the aspirations of the Nigeria people in particular. These convicts by their conduct acted in breach of the said objective and vision of INEC.

“Their actions were disgrace to the institute and a threat to democracy. INEC officials must be made to understand that their conducts must be conducted within the armpit of the law and that anyone who breaches the law will be dealt with. through the prescription of the law.

“It must be understood that leadership and governance are serious matter, that should be handed over to the most patriotic person, best informed mind and the most brightest brain who see accountability, responsibility.

“This country must not be allowed to descend into anarchy, despondency, financial, political or morally in valued by the conduct of the officials of the institutions of government.

“This country cannot afford an unhealthy electoral body, as we go into the forthcoming election, INEC must note that this country deserves a credible election, anyone that acts contrary to the law shall be dealt with decisively.

“In this regards, the country only need those with indomitable courage and impeccable political will to perform this duty, those who play ignoble roles must be identified and be removed now. Evil communication they say corrupt the mind.

“The penalty prescribed under Section 15 (2) and 16 (2)(b) of the Money Laundering Prohibition Act, under which the convicts were found liable, provides for the terms of imprisonment and in some instances option of fine or both.

“In the lights of the allocutus, the court will tamper justice with mercy to the extent only permitted by the law itself.

“Again, a strong message must be sent to INEC that the eyes of the world are on them; the entire nation is watching and those who decided to act contrarily to the call of office be identified and when they are identified they will be prosecuted and if found guilty, they shall be punished severely.

“It is in this circumstances and in the lights of all that have been said in the allocutor that the court is hereby sentence the convict.

“Both convicts are also sentence to seven years in count nine. The jail terms shall run concurrently.

“Also, the first convict, Christian Nwosu, shall forfeit to the federal government a landed property at Okpanaman in Delta State valued N5 million, another landed property at Okpanaman Delta State valued N20 million, and the sum of N5 million raised in favour of the EFCC. And the second convict, Tijani Ndah Bashir shall also forfeit to the federal government a four bedroom flat located at 6, Umeh Street, Wise 2, Abuja.”

The EFCC had preferred a criminal charge against the convicts and one Yisa Adedoyin, who had already been convicted by the court after he pleaded guilty to the charges.

The convict were said to have accepted cash gratification from a former Minister of Petroleum Resources, Diezani Allison-Madueke, in the build up to the 2015 general election.

They were accused of accepting the said gratification, which they reasonably ought to have known formed part of the proceeds of an unlawful act.

The convicts were re-arraigned after their co-accused (Adedoyin) had opted to change his plea by admitting to being complicit in the offences charged.