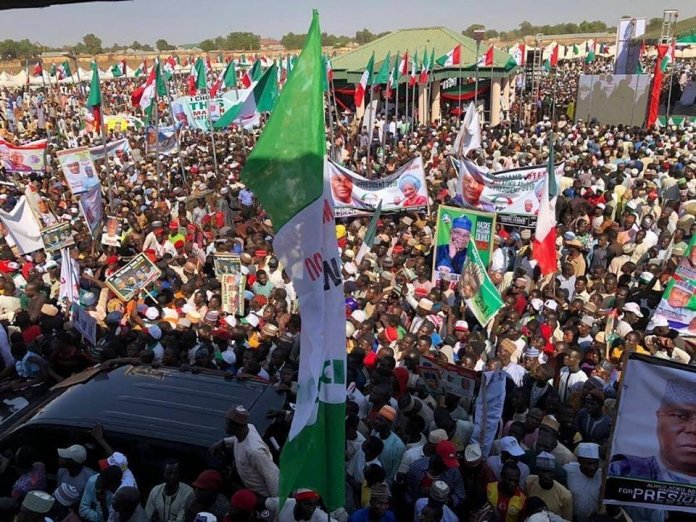 Akwa Ibom State Chapter of the Peoples Democratic Party (PDP) has raised the alarm over an alleged sinister plot by the opposition All Progressives Congress (APC) to frame up, arrest and detain critical stakeholders of the party throughout the electioneering season.

The PDP said an intelligence report reaching it revealed that plans have been concluded to ensure that during  APC rallies, buses branded as PDP buses or vehicles bearing state government number plates, will be loaded with arms and occupied by some criminals, heading to the venue of the APC rally.

On approaching, the buses and their occupants will be arrested and the contents of the buses displayed for all to see as a major security breakthrough.

Additionally, the criminals will mention some PDP top shots as their financiers, necessitating their arrest and subsequent prosecution under the anti-terrorism Act .

Chairman, Akwa Ibom Chapter of the Peoples Democratic Party, Obong Paul Ekpo, who made this disclosure in Uyo yesterday said the plot, which is hatched and sponsored by the opposition APC, is aimed at arresting and incarcerating the key leaders of the party and keeping them away from circulation throughout the elections.

“This is, to say the least, very crude, anachronistic and antediluvian, signaling APCs imminent defeat at the approaching polls”.

“We have stated before and will reiterate now that, we are a peace-loving party, operating within the ambit of the law. Our leaders who are currently being targeted by the opposition, are innocent Nigerians with proven integrity. They do not engage in arms stockpiling, or procurement of violence in any form. It is therefore very unfortunate that people who should be planning for elections, are rather hatching evil plans on how to arrest people

“It is evident even from the peaceful way we conducted our primaries, that we are very peaceful people. In our pre- and post primaries, there wasn’t a single gunshot, or death unlike the APC, where scores of people were reported dead in different parts of the state. In Okobo Local Government Area, an entire police station was razed by supporters of an APC aspirant, who felt shortchanged during their primaries

“In the past few weeks, the leadership of the party, has been inundated with calls from different parts of the state, where our supporters have been wantonly arrested and incarcerated, without any lawful justification

“In Essien Udim, scores of our youths and elders have been arrested on trumped up charges of defacing or destroying posters belonging to the President. In Nsit Atai, our supporters are slammed with grave charges, just to cause the court to deny them bail. In Nsit Ibom, one of our supporters was stabbed by a member of the opposition in front of the DPO, and till date the assailant has not been pulled in for question or arrested. In Ikot Abasi, people who are supporters who refuse to support their brother are mercilessly beaten and harassed. Even Journalists and various press men sympathetic to our cause are daily harassed and intimidated.

The PDP however reiterated that its members have not and will not send anybody to attempt to disrupt rallies or meetings of any other political party. The party also called on security agencies to note the intelligence and act swiftly. Recalling that during the House of Assembly imbroglio, the party had notified of an impending attack on the Assembly.

It regretted that the PDP haS been victims of the wanton destruction of  publicity materials. “Our billboards and other campaign materials have been maliciously destroyed and in reaction, we wrote to the police seeking their intervention. Up till now, we have not been informed of any warning, apprehension or arrest on the subject matter, rather we are witnessing arrest of PDP supporters for the destruction of non-existing billboards of the opposition”.

The Akwa Ibom Chapter of the PDP however urged  supporters of the party not to fear, but to remain conscious that “we serve a living God who is able to fight for us. The scripture in Psalms 70:2 is very prophetic, it states that May those who want to take my life be put to shame and confusion; may all who desire my ruin be turned back in disgrace. Amen”.