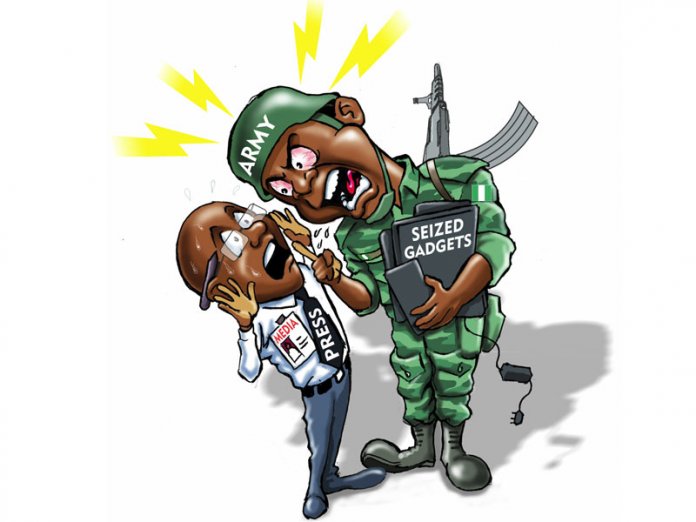 The invasion last Sunday by soldiers of the offices of Daily Trust Newspapers in Maiduguri, Abuja, Lagos and Kaduna is, to put it mildly, very unfortunate. The exasperating siege, arrest of reporters and seizure of computers and mobile phones, over matters that could ordinarily be resolved through dialogue cannot in any way help whatever cause the military might be pursuing. If there are perceived infringements on the part of the media, the right thing for the military to do is to approach the court of law for redress rather than resort to self-help.
In justifying its action, the army accused the newspaper of divulging “classified military information, thus undermining national security”. The said publication, according to the army, gave Boko Haram an advance warning, sabotaged the planned operation and put the lives of their troops in danger.

While we agree that a mistake was made by Daily Trust Newspapers in publishing the said story, the lesson that should be learnt from other jurisdictions with similar challenges to that of our country today is that defeating insurgents requires more than muscles. If there is no cooperation with the media and the civil populace, vital information that ought to assist the military would be withheld. And in such a situation, we are all losers.

We have said repeatedly that the military deserves our support for the sacrifices they make on behalf of the nation at a most difficult period in our history. From kidnapping to armed robbery, Nigeria is today challenged on several fronts. And as crimes become prevalent, several military personnel are now being deployed for policing duties. Because they have insufficient training for their new roles, engaging in activities that highlight conflicts between them and the civil society is also becoming a recurring problem. But wherever there is any allegation of infractions, as the Newspaper Proprietors’ Association of Nigeria (NPAN) reiterated in its statement, “the best option is to follow due process and civility, not knee-jerk, not intimidation and spread of fear in the civil society.”

For sure, the military confronts a serious challenge in the battle to contain the Boko Haram. Until lately, the insurgents were carrying out their grisly atrocities particularly in the Northeast, at will. And the feeling out there was that if the insurgents were causing such murderous havoc, then it stands to reason that our armed forces were not doing enough or lacked the requisite resources. There have also been serious allegations of impropriety against the leadership of the armed forces. Most of these issues are being reported in the media to the displeasure of the military authorities who see journalists as enemies. Curiously, the same military that initially denied reports that some territories were taken by the insurgents used the media as a scapegoat while planning to retake those same communities. The point here is that issues of trust and credibility of information must be addressed.

We understand that this is a difficult war to fight. A situation where terrorists are well-armed and buoyed by a false religious philosophy that has freed them from the fear of death can be unnerving. But as we have also repeatedly highlighted, the atmosphere of insecurity currently inflicted on the nation by the Boko Haram insurgency and other crises points to poor use of preemptive intelligence and a lack of coherent strategy. It is trite to say that the insurgents have entered a new phase in their campaign. Perhaps because they have international affiliates, they now have sufficient capacities to inflict serious damage and claim some territories as they did in the past. To therefore defeat them would require the collaboration of all the critical stakeholders.

It is in this light that we urge a continuous dialogue between the military and the media on the conduct of the war. If anything, such interactions, especially with bodies like NPAN and the Nigerian Guild of Editors (NGE), should assist in spelling out areas of collaboration. But to show good faith, the military must resolve their issues with Daily Trust newspapers in an atmosphere devoid of intimidation and threats.

Quote
Wherever there is any allegation of infractions, as the Newspaper Proprietors’ Association of Nigeria reiterated in its statement, ‘the best option is to follow due process and civility, not knee-jerk, not intimidation and spread of fear in the civil society’