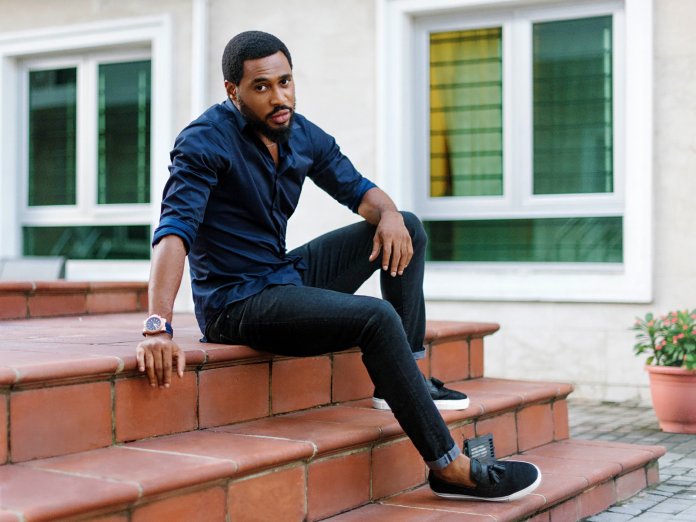 Blue-blooded Christopher    Ofala Okagbue (Chris) in a way is an embodiment of talent and skills in modelling, acting, singing and whole other lots of art. Having ventured into his ‘bill paying’ craft by chance in 2007, the young man has remained steadfast in his craft and it’s been good as he is enjoying it. He spoke with Ferdinand Ekechukwu

Imagine chatting up a young promising actor with a blossoming career in entertainment and asking him what responsibility his blue-blood background places on him while in showbiz… “Well, my dad is late. Rest his soul,” Christopher Ofala Okagbue (Chris) says to you. “So to a large extent, being royalty hasn’t deterred me from doing showbiz. If he was still alive, I strongly doubt if I would be in this industry because he was the Obi of Onitsha. I’m sure he would rather I had a more private life.”

Chris is an actor and model from the Okagbue royal family in Onitsha. His late father, HRH Obi Ofala Okechukwu Okagbue, was the longest ruling king (31 years) of Onitsha Kingdom, Anambra State.

He is packed in the arts. Other than acting and modelling, Chris possessed some other talents to include singing, dancing, sketching, writing, playing the guitar and piano. Add to that is acrobatics and gymnastics. An embodiment of talents and skills, from these lots, which does he think he has explored the most? “It would be my acting. At least, that’s what pays the bills now.” But his first love in the arts has always been music.

That’s the part he hasn’t really explored. He has done a few covers of popular songs. He also did a bit of singing in the movie ‘Lotanna’ where he played the character Lotanna; a young man who discovers at an early stage that he had to offset a debt owed to a mysterious stranger called Don Creflo by his late father. “Who knows, I might still explore music in the future. I haven’t shot that door completely.” Shooting ‘Lotanna’ was one of his best experiences as an actor and associate producer and it appears the most anticipated movie of 2017.

Chris proved his mettle as a highly talented actor with his stellar performance as a leading man alongside Ghanaian star actress Ama K. Abebrese from the award-winning Hollywood film, ‘Beast of No Nation’. “Lotanna character is a deep one. He hardly ever laughed or smiled. He had very moments of genuine happiness. More than half the time he looked like he had the weight of the whole world on the shoulder.”

The true Chris persona is the opposite of the character in real life. “I am a happy go lucky person. With me, there’s always something to be happy about. I laugh and smile a lot. So it took a lot for me to stay in that headspace of continuous sorrow and sadness.”

Acting for Chris was by pure chance in 2007. For the Sociology graduate, his first encounter with acting came in 2007, just three years after he started modelling. He accompanied a friend to an audition for a soap opera.

Out of curiosity as to what all the fuss about acting was, he decided to try out. With his experience as a model, he wasn’t camera-shy, neither was he moved by the crowd. Nor any challenge. The only thing he had to get used to was the length of shoots. “In modelling, you’re only inside for a few hours, but as an actor, you can be on set all day,” he recalls.  On his modelling part, “I had a lot of fun experiences as a model. One of my memorable experiences was a TV commercial for a telecoms company, Glo.

“It was the first and only time I had actually shot a commercial with my twin brother. It was just both of us. It was very fun,” he revealed. From a family of five siblings, Chris was introduced into the world of showbiz by her elder sister, Sandra Okagbue, an ex-beauty queen.

“She started the whole thing and introduced me to modelling. My twin also modelled very briefly but soon realised it wasn’t really his thing. So it’s just me right in the family,” he admits.

He didn’t do a lot of acting because he was still not so interested in it. He only started to act a lot more after the reality television show that he took part in, the Gulder Ultimate Search in which he emerged the winner in 2011. He beat 29 other contenders to walk away with the handsome cash prize and an SUV.

It was right after the show that he got on the raved drama series Tinsel on Africa Magic that he started to do more of acting. “The more I did the more I enjoyed it. Gradually, it became something I’m passionate about and the rest is history.”

Like everything else, he says it’s been ups and downs. But generally it’s been good and he’s enjoying it.

The self-acclaimed nice guy has this to say about his status and being in the public when asked how he handles female fans. “Even though I am in the public eye, I’m a private person and I like my life that way. So I just try as much as possible in the nicest way possible to be nice to women but also try and make sure that they don’t cross boundaries.

“Of course some of them are very stubborn and do not take no for an answer. But somehow I manage.

My relationship status I’d like to keep to myself. But I would say to you that I am not as tough as I look. I’m a lover of love, I love the idea of love, and I value relationships. I’m not married.

That’s a fact; whether or not I’m in a relationship that I would keep to myself.”

The handsome and dapper young entertainer as much as he wants to keep to himself his relationship status, has always had a thing for Nigerian singer, Tiwa Savage as his woman crush. “I’ve always had the biggest crush on Tiwa Savage. Who doesn’t?” He said laughing.