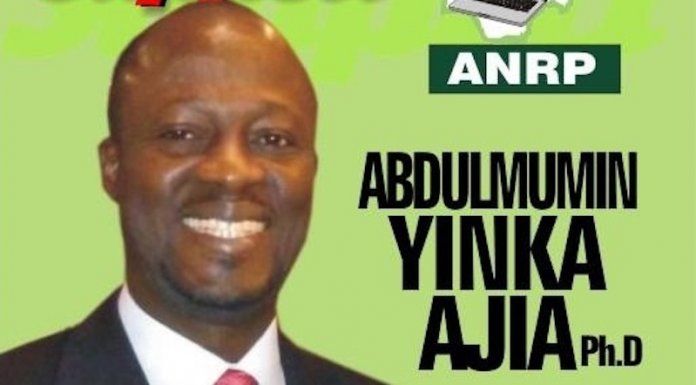 The governorship candidate of the Abundant Nigeria Renewal Party (ANRP) in Kwara State, Dr. Abdulmumin Ajia has pledged to revive the education sector of the state if voted into office next year.

He promised that his administration would earmark 35 per cent of the state’s budget to education so as to encourage academic excellence among pupils.

Ajia made the promise in Ilorin while unveiling his five-point cardinal manifestoes and his running mate, Mr. Samuel Adeleke before journalists ahead of the March 2, 2019 governorship election in the country.

He decried the poor attitude of successive governments in the state towards the development of primary education, adding that basic education remain a pivotal platform upon which all other levels of education rest.

“It is disheartening that the past governments failed to develop basic education and this has affected the quality of education of the state.

“In view of this, our government would develop basic education so as to assist the youths to be more committed to their academic pursuits.

“Our government would also ensure infrastructural development of primary schools with instructional materials that will assist the pupils to learn fast so as to boost their academic excellence.”

He added: “Teachers will be motivated through the payment of their salaries as and when due. The teachers would also be trained on modern day educational management to equip them for the overall educational advancement of the pupils.”

He said the pupils would be provided with nutritious free launch every day to ginger them to be more alive to their studies.

Ajia, who berated the current administration in the state over the dilapidated infrastructures and non-payment of teachers’ salaries, said the development has affected the results of the students in various external examinations like NECO, WAEC, NABTEB, among others.

He disclosed that most schools in the state lack windows, doors, roof, among others stressing that the bad academic environment had affected students’ performance.

Ajia therefore assured residents of the state that the party would rise to the challenge to move education forward and advised them to shun all forms of antics that may affect the growth of education in the state.