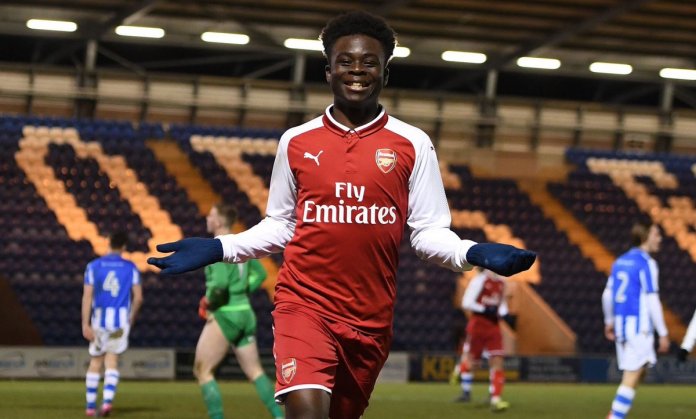 Arsenal winger Bukayo Saka of Nigerian descent became the subject of an interesting statistic when he made his Premier League debut on New Year’s Day and the 17-year-old – born September 5, became the first player born in the year 2001 to feature in the elite division

“I love them and will miss everyone at the club. I want them to know that any day and anytime, I still remain at Robo Queen and will always represent them well anywhere I find myself and will do my best to give back to the club.

“To the upcoming players at Robo, if it can happen to me, I believe everyone can have the same opportunity of going far and wide. I will urge them to keep working hard and doing their best.

“I also want to thank coach Osahon. He has been the backbone of every success I’ve achieved today and has tolerated and persevered with me. I am very grateful to him,” Ajibade said.

Avaldsnes manager Tyriberget believe they have snapped up one of Africa’s most promising young talents ahead of the 2019 Toposerien season which starts in March.

Born December 8, 1999, Ajibade has represented Nigeria at U-17, U-20 and the senior national team. She has been playing for FC Robo since the 2013 Nigeria Women Premier League season. In 2014, she was listed as one of the best young talents in the league and in September 2018, she won the Nigerian women football freestyle competition for the second consecutive time.

During the 2015 NWPL Week 2 games, Ajibade was listed in the team of the week, compiled by Soccerladuma South Africa, despite her team losing to Confluence Queens during the round of matches.

Ajibade won the first edition of Nigeria National Freestyle Championship, which is a competition to promote freestyling football and in 2017, despite Robo not being among teams that finished tops, Ajibade was voted Player of the Season after scoring eight goals to save her team from relegation.

In 2018, she was nominated as the Best Player in the 2017 NWPL at Nigeria Pitch Awards.

Ajibade scored once as Nigeria won a ninth title at the 2018 Africa Women Cup of Nations in Ghana and was a joint-top scorer with 10 goals as the Falconets qualified for the Under-20 World Cup this year and also helped the senior B Team to a third-place finish at the 2018 West Africa Football Union title.

She is regarded as one of the best female freestyle footballers in Nigeria after winning the competition back-to-back in September.