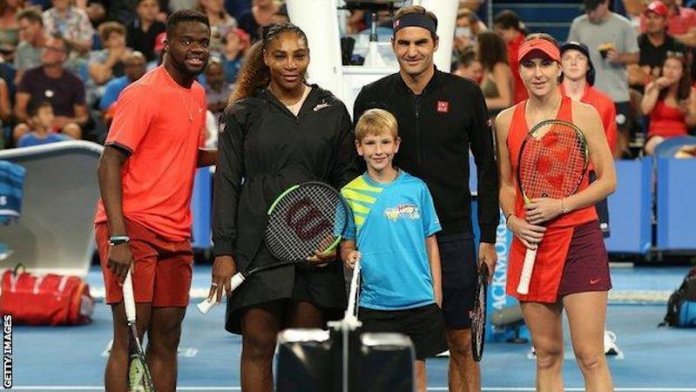 Federer and Belinda Bencic defeated Williams and Frances Tiafoe 4-2 4-3 (5-3) in a mixed-doubles contest to secure a 2-1 win in the round-robin tie.

Federer and Williams, both 37, earlier won their respective singles matches.

“It was great fun. I really enjoyed playing against Serena. What an honour,” said Federer.

“I was nervous returning because people talk about her serve so much. I know why they say it now, she has a wonderful serve.

“She’s a great champion, you see how focused she is and I love that about her.”

Federer and Williams have won a combined 43 Grand Slam singles titles, and have spent a combined 621 weeks at world number one.

The match had been described as the most anticipated contest involving a male and female player since the ‘Battle of the Sexes’ in 1973, when 39-time Grand Slam champion Billie Jean King beat former men’s world number one Bobby Riggs in straight sets.

“It was a great experience. I’m sad it’s over, I was just warming up,” said Williams.

“It was so fun to do this at the pinnacle of our careers.

“The guy is great. He’s the greatest of all time. There’s a reason why he is so great. He has a killer serve. I’ve watched him all the time but I never realised how good it was. Maybe I could get some tips from him later on.”

Before the mixed-doubles contest, Federer beat Tiafoe 6-4 6-1 before Williams levelled the tie with a 4-6 6-4 6-3 victory over Bencic.

The Hopman Cup comprises two singles and a mixed doubles match between nations in a round-robin format with two groups of four. The winners of each group will contest Saturday’s final.