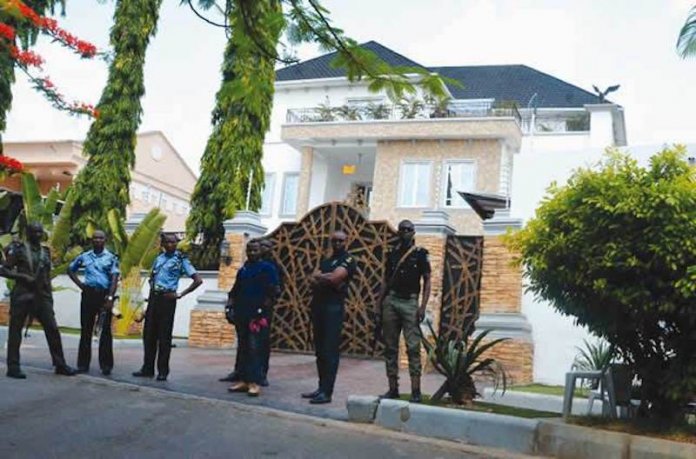 Alex Enumah in Abuja and Yekini Jimoh in Lokoja

The Nigerian Police Force yesterday insisted that the members of the force deployed to effect the arrest of Senator Dino Melaye at his Abuja residence would not retreat until the senator who is wanted by the police for alleged attempted culpable homicide turns himself in to the police for investigation.

However, as policemen continued to lay siege to the residence of the senatorial candidate of the Peoples Democratic Party (PDP) for Kogi West senatorial district in the 2019 elections, the Senator Dino Melaye Campaign Organisation has sent a Save-Our-Soul to the Abubakar Abdulsalami-led National Peace Committee.

Operatives of the Force laid siege to Melaye’s residence in Maitama, Abuja since Friday last week to effect the arrest of the Kogi West Senator over alleged shot fired against an officer of the force by thugs said to be with Melaye.

The police said Melaye is wanted for a case of criminal conspiracy and Attempted Culpable Homicide, committed on July 19, 2018, when he “and his armed thugs attacked Police personnel; shot and wounded Sgt. Danjuma Saliu, attached to 37 Police Mobile Force (PMF) on stop and search duty along Aiyetoro Gbede, Mopa Road in Kogi State.

However, Force Public Relations Officer (FPRO), DCP Jimoh Moshood said that the Police operatives with a duly obtained Warrant of Arrest deployed to arrest Senator Dino Melaye in his residence in Abuja will not retreat until Senator Melaye surrenders himself for arrest and investigation.

In a statement issued yesterday by the spokesperson of its Media Directorate, Mallam Yakubu Bawa, the organisation said it had become imperative to send SOS to the Abdusalaami Committee on the impropriety of this new attempt to muzzle dissenting voices to those in power.

The statement noted that four days before the invasion of Senator Dino Melaye’s residence, he had alerted the world of a plan to that effect which the Police Public Relations Officer (PPRO), Acting DCP Jimoh Moshood hurriedly denied, describing the allegation as untrue and mischievous.

“With the unfolding event, we have every reason to be concerned about the real motive behind the new attempt to arrest Senator Melaye considering the spate of strange and unresolved deaths of persons in police custody in recent past,” the statement said.

The campaign organisation urged the committee to investigate threats issued by leaders of the ruling APC in Kogi State who boasted that Melaye would be out of circulation before the Atiku campaign team visits the state.

The group also alleged that a candidate of the APC in National Assembly election had also called and threatened his PDP opponents to be prepared for intimidation and harassment, warning them to be prepared to be blocked from traveling to their constituencies on election day.

It warned that with the inaction of the IG, Ibrahim Idris on the petition to the police chief to arrest and prosecute some political thugs identified to be members of the All Progressives Congress (APC), who disrupted the peaceful campaign of the Social Democratic Party (SDP) candidate, Natasha Akpoti in Kogi Central senatorial District, and also attempted to assassinate her, “it is crystal clear that the APC, working in tandem with the police, is hell-bent on crushing the opposition and killing democracy in Kogi State.

“Unfortunately, President Muhamnadu Buhari, in desperation for re-election, pretends not to be aware of the serious dangers posed to Nigeria democracy by his cronies in Kogi State.

“Kogi State judiciary is presently on strike with no known date of resolution and it is disturbing that the Police will display so much desperation to bring the senator into their custody with the fear expressed for his safety.

“That this new onslaught commenced after the curious transfer of Kogi State Commissioner of Police who the Kogi State Government vehemently fought to be retained earlier in the year after an official transfer was announced, gives room for apprehension.

“We are constrained to believe that there is a conspiracy to keep Senator Dino Melaye out of circulation permanently by some persons and it is the script that is presently playing out”.