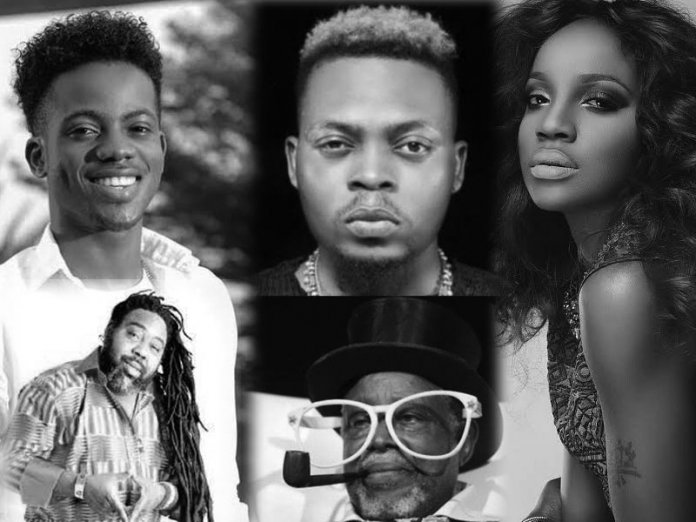 The Year 2018 will likely end as it started – anonymously. It will also go down as a year some promising entertainment heavyweights failed to realise their full potential and a time the entertainment industry-defining events and shows either did not live up to their billing or did not hold at all. Vanessa Obioha examines the kaleidoscope

For the first time, MultiChoice Nigeria didn’t hold the popular music reality show The Voice Nigeria. The Nigeria version of the international reality television singing competition franchise launched in 2016 with the promise to provide unrivalled entertainment to viewers. That first edition was a rave. It returned in 2017 with a better script but any chance of it hitting the airwaves this year was dashed. Its absence on the screen this year indicated dwindling sponsorship for the show which is produced in South Africa.

With the reality show finally rested, not a few expected the telecom company to launch another singing competition. That was hardly the case. Despite the various art and entertainment projects MTN sponsored this year,  none was designed for  music fans and budding talents who leverage on such platforms like Project Fame to display their  talenys.  Since inception, the MTN sponsored reality show has been steadfast in its quest to discover new music talents. Some of its products like  Praiz, Chidinma, Niniola have blossomed into superstars.  Its last season was in 2016.

Lovers of Darey’s themed Love Like A Movie concert may gradually accept the fact that the singer will no longer host the show. Since the American singer, Ciara’s visit in 2016, the show hasn’t hold. Though the production company, Livespot 360 has been involved in other projects, most recent being the Access Bank’s Born in Africa, audience still yearn for the magic of Love Like A Movie.

The year 2018 wasn’t a fantastic year for the Ghost mode rapper. Even though Phyno had successfully hosted three editions of his annual themed concert in the south-east, the ‘Fada Fada’ singer failed to host the show this year. At his last edition, cases of sexual harassment was widely rumoured though the artiste had debunked the claim. Phyno is expected to unveil his new artistes in the coming year.

Popularly called MAD Festival, the event was a first-of-its-kind shopping experience that saw a partnership between foremost music channel, Trace Naija and top online retailer, Jumia. The festival was a commemoration of Jumia’s Black Friday which lasted for one month. Music stars like Wande Coal, Niniola, and Skales entertained the crowd while they enjoyed flash sales from the e-commerce hub. This landmark event was missing in action this year.

Her disappearance from the music scene earlier this year was a cause for worry to many in the industry, until it was discovered that the artiste was in a financial mess. Although she resurfaced with a change of name: Madrina on her Instagram page little had been heard of the ‘German Juice’ rapper.

Last year, journalist-cum-publisher, Funke Osae-Brown, launched the first Nigerian Luxury Lifestyle Summit to address the issues in the luxury industry. The summit attracted major stakeholders in the industry and was largely applauded. The second edition of that summit, however, didn’t materialise this year.

For a while, Seyi Shay looked like the next big diva to emerge from the music industry. But this year saw a low turnout for the artiste. Apart from starring in Biola Alabi’s ‘Lala and the Beat’ and her Electric Package (EP) – which had the song, ‘Surrender’, featuring Kizz Daniel – Shay didn’t really hug the headlines.

The ‘Godwin’ crooner didn’t cause quite a rave this year as other fellow label artistes like Tiwa Savage and Johnny Drille. Of all the songs the Mavin Records artiste released this year, only ‘Work it’ (the dance version) garnered over 1.2 million votes on YouTube. The official audio on YouTube had only 456,031 views.

The all-time Nollywood diva was mostly in the news this year for her fashion, age and marital status as well as opinions regarding her industry. This year didn’t see the actress carting away major awards or featuring in a major Nollywood production.

Controversies, Deaths in the Entertainment Industry

Early this year, Tekno had a brief rift with the Ajegunle singers, Danfo Drivers, over the song, ‘Jogodo’. Jogodo was a hit song of the group back in 2000. When Tekno released his own version in April without acknowledging the singers, the duo expressed displeasure and threatened to deal with Tekno. However, the Made Men Music Group artiste quickly sought out the artistes and resolved the issue. Jogodo was perhaps the only hit the artiste produced this year. By November, his record label announced that the singer had damaged his vocal cord and could be away from music for a while.

Recent times have seen the first winner of the MTN Project Fame West Africa Reality TV show struggle musically. This year marked his 10th anniversary in the music industry but the artiste’s career instead of moving upward has been on a downward spiral. Moving from Mavin Records to Temple Management, the artiste had failed to perform the magic that came with his hit tracks ‘Kukere’ and ‘Your Waist’.  Also, he is not on the top list of corporate events organisers.  Before he released his latest works, ‘Credit’ and ‘No Drama’, there were unconfirmed reports that he was in a financial mess to the extent that he sold the car his label bought for him. His new releases are yet to attract commercial success.

It has become a habit of the rapper to release controversial songs that eventually lead to a ban. In January, Olamide released the controversial science student song that celebrated drug abuse. That song drew heavy criticisms but the artiste turned around, claiming that the song was condemning the abuse of drugs and not promoting it as widely circulated. Recently, another track ‘Logo Benz’, from his debut YBNL Mafia album has also been pilloried. Critics argued that the song was too explicit in its attempt to highlight the menace of blood money and pant robbery culture that is prevalent in the society today. Reacting to the vitriol, Olamide on Twitter said that musicians should not be boxed because they reflect the happenings in the society.

The duo got the internet raving with their collaborative effort, ‘Fever’. While the visuals which displayed the two in a very intimate setting fuelled the suspense around the relationship between the two, Savage was criticized for her indecency. The public argued that as a mother, she should have shown some modesty in the video. Both singers are yet to confirm their relationship status.

Daddy Freeze and Akpororo Controversial on-air-personality, Daddy Freeze had some squabbles with many in the religious and entertainment sectors regarding his opinions about the church and its conducts. When the Redeemed Christian Church of God bestowed a pastoral title on the wife of the National Leader of the All Progressives Congress (APC), Senator Oluremi Tinubu,  he condemned the act. But his most recent clash with comedian Akpororo was a sensation on social media. The comedian attacked the media personality during his performance at the gospel concert ‘The Experience’, stating that he would convert Freeze to a wall gecko if he had the anointing to do so in order to stop his rants about tithing. Not one to run away from a fight, Freeze reacted, calling the comedian ignorant while expressing disappointment that the convener of the concert, Paul Adefarasin would allow “someone so uncultivated in scriptural maters address such a delicate issue as tithing on his platform.”

The Executive Director of the National Film and Video Censors Board (NFVCB), Adedayo Thomas, has been embroiled in a series of allegations of corruption levelled against him by some members of staff of the board. Thomas was accused of stealing a 500KV generator and misappropriating funds to the tune of N150m. He appeared in court recently where he pleaded not guilty to the charges. Lending their support to the embattled boss, major Nollywood stakeholders led by Ralph Nwadike described the allegations as the work of the oldest member on the board, Cornell Agim. They stated that Thomas had helped in fighting piracy in the industry, urging that his name should not be dragged through the mud. The case was adjourned till January 28, 2019.

The billionaire DJ new video announcement on Twitter was met with mockery. Cuppy, who came into limelight as a DJ is yet to record commercial success in the singing department. Fans mocked her poor vocals through memes while alleging that the only reason producers will work with her was because of her wealth.

The reggae legend who came into limelight in 1989 with  hits such as ‘What’s Gwan’ and ‘Rhumba Stylee’ died  on June 10 this year. Kimono slumped at the airport on  his way to the US after complaining of uneasiness. He was rushed to the hospital where he finally gave up the ghost. His wife, Efe, died in September.

Popularly known as Baba Sala, comedian,actor and producer, Moses Olaiya Adejumo, died in October at the age of 82.

The actress who came into limelight after starring in the flick, ‘Omoge Campus’ died in Canada in May following a long battle with cancer. She was greatly mourned by her colleagues in the Yoruba speaking film industry.