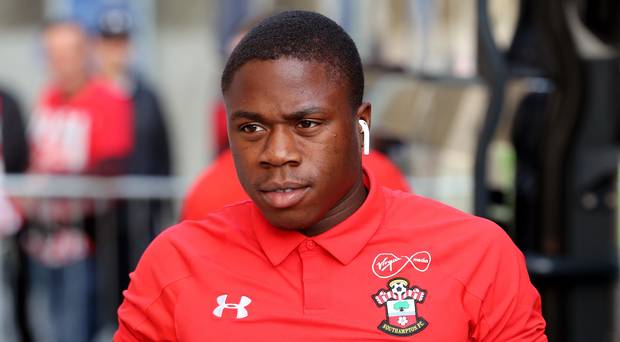 Born in Dublin to Nigerian parents, Obafemi recently represented Ireland but could still switch allegiance to his fatherland.

The 18-year-old slid in a Nathan Redmond cross to secure all three points for the Saints in the 71st minute thus becoming the youngest Saint player to net in England’s top division.

Obafemi thanked team-mate Nathan Redmond for his help on and off the pitch after becoming Southampton’s youngest ever Premier League goalscorer. He is also now the youngest Irish scorer in Premier League history.

The 18-year-old, who joined Saints from Leyton Orient in 2016, marked his fifth Premier League appearance by tucking away Redmond’s cutback six minutes after coming off the bench to seal a 3-1 victory over Huddersfield.

He told the club’s website: “It was surreal and I’m thankful to Redders for giving me the assist. I should have scored two or three more but I’m just delighted to have got my first goal.

“I wanted to get the previous chance out of my head straightaway because I knew myself it should have gone in the back of the net. I knew another one would come and I’m glad I put it away when it did.

“Just before I came on, the manager said to make sure I run and do the basics before anything else and the goal will come. All the lads on the bench were saying just show what I can do and that the rest would fall into place. This is the first step in my career. I’ve come a long way since my debut against Tottenham and I’m thankful for everyone who has believed in me.”

Obafemi made his Premier League debut against Tottenham in January and was given the first start by Mark Hughes in the previous manager’s final game against Manchester United earlier this month.

He impressed before being forced off by a hamstring injury and this was his first appearance since.

New manager Ralph Hasenhuttl has now won two of his first three games in charge, and Obafemi praised the impact of the Austrian as well as winger Redmond, who was the stand-out player on the pitch at the John Smith’s Stadium.

“He’s changed the whole system,” the teenager said of Hasenhuttl. “You can see we are a lot more aggressive and direct and playing higher up the pitch. It suits us and it’s getting us results.

“On the pitch, Redders is a close friend of mine and he’s always giving me advice before games and even off the pitch as well, making sure I stay grounded.

“This is the first step in my career. I’ve come a long way since my debut against Tottenham and I’m thankful for everyone who has believed in me and got me back into this position.”

The Southampton manager was pleased with his young Irish striker, although might have had a hat-trick in the 25-minute he was on the pitch: “His speed gives us a little bit more opportunity,” said Hasenhuttl. “He had two or three more chances.

“I’m happy for him. He’s a cool guy, he has quality and I think after his injury coming back with the goal is perfect for him.”

Meanwhile, new Ireland manager, Mick McCarthy is hoping that rising star is a Robbie Keane in the making.

While the teenager could have bagged a hat-trick, his milestone moment comes just a month after making his Ireland debut in the Nations League draw away to Denmark.

That just happened to be Martin O’Neill’s last game in charge of the boy in green but it tied Obafemi to Ireland as it was a competitive match.

Ireland have struggled for goals ever since record-scorer Keane retired but Obafemi is certainly showing flashes of potential.

McCarthy said on Sunday: “I’m delighted and I’m going to go watch him. Martin played him on his last game and gave him a cap. There was a bit of criticism about it and I was on the TV saying ‘hold on’.

“It might turn out that Michael Obafemi turns out to be the next Robbie Keane and we should all be lauding Martin for giving him his cap.

“Now here he is playing in the Premier League and scoring goals. He looks like he deserves it now. It’s to my benefit and ultimately to the Republic of Ireland’s benefit.

“I’m never too unhappy when I have people who can run, who are quick and can run in behind and he looks like he can stretch defences.”

Obafemi admitted the goal was ‘surreal’ but knows he should have bagged a hat-trick as the Saints maintained their hot-streak under Ralph Hasenhüttl.

He has relished the opportunities to come his way this season after six Premier League appearances and another in the League Cup.

Standing at 5ft 7in tall, Obafemi is diminutive in height but he makes up for it in energy, pace and strength.