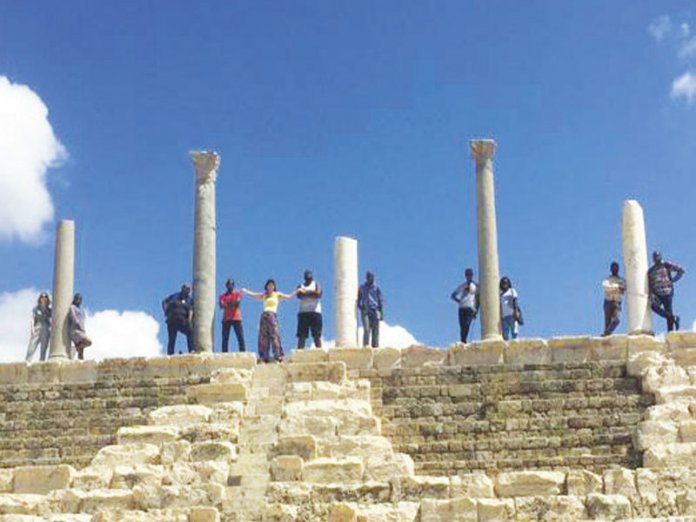 Just when the memories of a recent guided tour of Lebanon began to dim, a new set of photographs of the 2018 participants at the Study Abroad in Lebanon (SAIL), were released by the President of the Cedars’ Institut, Dr. Joseph Rahme.

The photographs are iconic as they captured a multi-racial collective in their on-site experience of the relic of a city which had seen Greek, Roman, Byzantine, Arab, Crusader and Mameluk conquerors. The hippodrome in Tyre is one of the UNESCO World Heritage sites in Lebanon.

The areas covered during the tour include Al-Mina, the former island before the coast holding the Roman ruins, the vestiges of Venetian Cathedral and the walls of a Crusader Castle. While on the mainland is Al-Bass, consisting of the necropolis of El-Bass, the triumphal arch and the hippodrome.

Rahme, who was more equipped with history than the touring students, said he would point out the best places to take shots at Tyre. It was believed that the purple dye was invented in Tyre while it served a pivotal role in commerce for the Phoenicians.

Of course, the Old Roman graves were not on list of options of where to strike a pose for the photographs. Though deserted, the ruins at Tyre are guarded closely like a commercial bank, as protected by the Antiquities Law.

Perhaps, the best one could do was to engrave one’s name on some of the pillars at Hippodrome or pick a little stone or some sand from the ruins to travel home with or simply smile at the thought of walking on the same sand as Alexander the Great.

For an artist, it was mind-blowing to see the Roman hippodrome of Beirut, which is considered as the grandest of the existing five hippodromes in Eastern Mediterranean. It has amphitheatres that are several metres high and a race track.

In no particular order, some songs listed below which were released by Nigerian artists (or collaborations featuring Nigerian artists) this year will go down in history as trendsetters for their lyrical content, mass appeal, culture shock or unusual engagement with the public. For this reason, they enjoyed reviews online and in traditional media. Here is the list in no particular order:

A. This is Nigeria – Falz the Badt