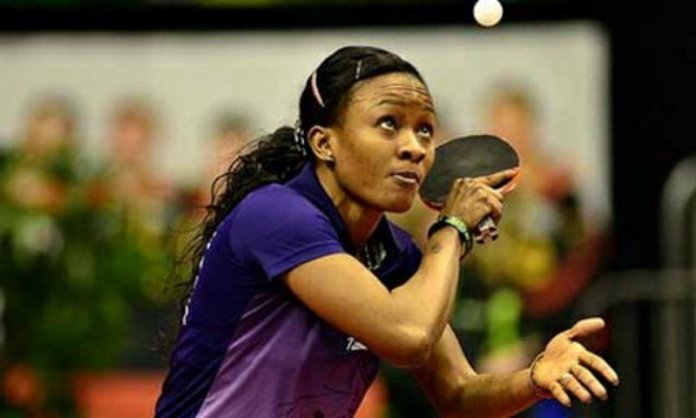 Funke Oshonaike’s dream is to become the first female athlete to participate in seven Olympic Games and few doubted her ability to achieve the feat considering her precedence. However, with her lacklustre performance at ongoing National Sports Festival Abuja leading to a shock defeat to 19-year-old Nimota Aregbesola, doubts is now cast on whether the African table-tennis queen can achieve her dream writes Kunle Adewale

If wishes were horses, the very day the 2020 Olympics Games gets underway a record would be set- Nigeria’s Funke Oshinaike, who would then be 45 years old would become the first female athlete to appear in the Olympics.

Africa’s queen of ta­ble ten­nis, who started com­pet­ing for Nigeria since the early 80s and has at­tended six Olympics be­gin­ning from the 1992 Barcelona Olympics and still felt she go for a record 7th Olympic Games.

“Table tennis is something I have the passion for, so much so that over 40 years I am still playing. Sometimes, the situation of the country tends to weigh me, I think probably it is because of my German lifestyle I am used to, and over there things are quite different. But I realise that this is Nigeria and we have a way of doing things. I am hopeful that one-day things will change,” she told THISDAY.

The tennis veteran, however, suffered a shocking defeat to 19-year-old Nimota Aregbesola in the table tennis event of the ongoing National Sports Festival in Abuja. Oshonaike lost to the teenager in the quarter-finals women singles with the scores 4-3.

An obviously shocked Aregbesola could not believe the feat she had achieved as she rolled on the floor in excitement, finally said she was aiming for the gold medal.

“I couldn’t believe I will beat Funke. I was confident at the beginning but I lost hope as the game progressed. I just listened to my coach and teammates cheering me on to pull my last point. This is my first participation at the NSF, and I am aiming for the gold medal,” she managed to say as fans hurried to celebrate with her.

The loss to Aregbesola has left a big doubt as to whether Oshonaike still has the strength to forge ahead in the game, while many are of the opinion that she should just quit honourably.

“Maybe I will re­tire soon, but, right now, I’m still hav­ing fun with what I am do­ing. It is not giv­ing me stress. As long as I have ev­ery­thing I need, then why should I stop. Many peo­ple have told me that age is telling on me but I be­lieve age is noth­ing but num­bers. Age is in the head and heart,” Oshonaike said.

For every glorious career, there is always a starting point; Oshonaike’s foray into table tennis began at her teenage years in elementary school in the streets of Shomolu, a bustling town in Lagos State. At that age of her life passion for the sports helped to water the ground for this life expedition. While in Shomolu, Oshonaike started developing this perceived potential which she describes as a ‘talent from God’ using a makeshift table and soak away slabs to play the game with her elder brother.

From there, the ship took the sail to her secondary school, where she started representing the school at competitions, earning her awards and recognition from the school principal who recognised this budding talent and decided to propel her to greatness. This opportunity did not only launch her to the limelight but set her apart as a rare talent with promise and potentials.

“I started playing table tennis at the age of 12, during my primary school days in Shomolu and I was driven by the belief that it was a God-free given talent and the fact that my elder brother played was also an inspiration. We had a small makeshift table to play with before somebody in my street bought a table tennis board and from there a coach discovered me. Then I started representing my school, the state and the country. At the state level, I won the several awards and was also recognised by the state,” she recalled.

According to her, “the journey has been wonderful for me, and I have no regret whatsoever. Table tennis has taken me everywhere and given me everything I have achieved today. Though there have been some challenges, that is life nothing good comes easy. There have been good and bad times in my career, but I try to move on despite these ups and downs. One of the saddest moments in my career was during the Commonwealth Games in New Delhi in 2011 when I was dropped from the team. Despite that, I did not lose faith in the team and the country; today I still represent the country.”

Ademola Adeleke at 60: The Eagle Soars