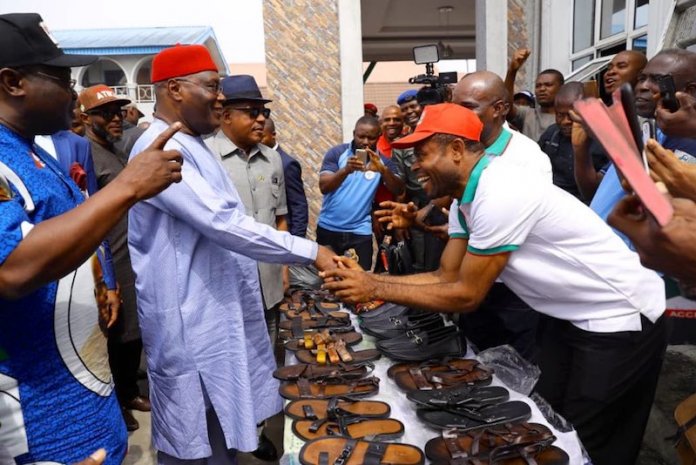 A meeting of the PDP presidential candidate, Alhaji Atiku Abubakar with the South-east business community in Aba, Abia State, has set a new tone in the 2019 campaigns, writes Emmanuel Ugwu

For a man, who is involved in virtually every aspect of business and a major player in the nation’s economy, presidential candidate of the Peoples Democratic Party (PDP), Alhaji Abubakar Atiku was on a familiar turf on Wednesday, December 19, when he engaged the business community in Aba, Abia State. He came to Aba, the commercial nerve centre of Abia State and hub of small, medium enterprises (SMEs), where he held a town hall meeting with the business community in the Southeast zone of the country.

During the interaction with captains of industry, entrepreneurs and the executives and members of the organised private sector from across the South-east, the business language did not sound esoteric to Atiku. He was familiar with the terms and issues pertaining to business and economy as he took every question raised with knowledgeable calm and candour.

Significantly, Atiku’s meeting with the South-east business community was the second time a presidential hopeful would engage in such sincere conversation with the OPS in the zone. Former president Goodluck Jonathan did the same thing, when he sought their votes ahead of the 2015 general election. It was clearly in recognition of the voting strength of this community.

Just before he entered the conference hall of Aba Sports Club 1926, venue of the meeting, Atiku inspected a mini exhibition of made-in Aba products, accompanied by the state governor, Dr. Okezie Ikpeazu. The PDP presidential candidate was impressed with the famed ingenuity of Aba as reflected in the array of products ranging from shoes, sandals, boots, belts, bags and clothing of various designs and colours.

The products were comparable to any of such goods one could find in the international market hence Atiku could see no reason why the people behind such high quality products should not be encouraged to soar high. He was not alone in appreciating the Aba wonder as his entourage included his running mate and former governor of Anambra State, Mr. Peter Obi as well as the national chairman of PDP, Uche Secondus.

While the business community was well represented from across the Southeast zone, the political class did not fail to turn out in large numbers, perhaps, to underline the fact that good economy derives from good politics. Although the mission of Atiku and Obi in Enyimba city was to talk business, their spouses were part of the entourage.

Atiku’s wife, Jemina was there, so also Margaret Obi and Ene Secondus, who were led into the venue by the wife of the Abia governor, Nkechi Ikpeazu. The women listened as their men discussed how the economy would be revamped. By coming along with their spouses to the business environment, the PDP presidential standard bearer and his running mate clearly contrasted the “other room” philosophy of President Muhammadu Buhari.
The discussion was frank and sincere as the business community bared their minds on the challenges facing them. They also made demands on what should be done to put the private sector on very strong footing to drive the economy.

The first deputy president of the national association of chambers of Commerce, Industry, Mines and Agriculture (NACCIMA), Sir John Udeagbala set the ball rolling when he told the PDP presidential candidate that “the Southeast is a disadvantaged zone in all ramifications hence the need to put Atiku on the know about the real situation of things so he could change the narrative if he mounts the saddle in Aso Rock next year.
The responsibility of placing the shopping bag of demands before Atiku fell on the president of Aba Chamber of Commerce, Industries, Mines and Agriculture (ACCIMA), Engr Andy Uba Obasi.

The 10-point demand included adequate and interrupted power supply, revival of nearby seaports, railway, rehabilitation of federal roads and support for Enyimba economic city, favourable federal government industrial policies – ease of doing business. Others included concession of moribund federal assets, resolution of the Geometric Power quagmire, and protection from the Africa free economic zone agreement, among others.
“Our earnest desire is the sustenance of the economy proper policy initiatives,” he said, adding that “the Aba business community is ready to overtake China and Japan if only government can provide the enabling environment”.

Udeagbala explained that the ‘ease of doing business’ policy would not achieve the stated objective unless government puts a stop to extortion, harassment and intimidation being meted to businessmen by security agencies in the South-east zone.
Other speakers that lent their voices to the conversation focused on various areas that business growth has been stifled in the South-east over the years. It was evident that there were official policies and programmes that deliberately held down the growth of business and manufacturing in the zone. Sadly, Nigeria has ended up shooting itself in the leg by neglecting the economic potential of the South-east all these years.

For example, the zonal controller of the Nigeria Shippers Council (NSC), Ify Okolue stated that the overconcentration of importation activities in Lagos has adversely affected business growth in the South-east, because of the difficulty and cost of moving cargo from Lagos in the west to the eastern flank of the country.
She noted that the intractable gridlock in Apapa could have been avoided if the seaports at Calabar, Onne and Warri were developed and made functional.

The NSC zonal coordinator also observed that apart from denying Southeasterners the opportunity to conduct their importation activities in nearby ports located in the neighbouring states of the South-south, the long abandoned Onitsha river port could have helped to cut down the cost of doing business and also create jobs if the project had been realised. But Okolue said all hope was not lost as Atiku “knows what it takes to facilitate trade”.
Atiku listened with appreciative attention and promised that he would tackle the problems which as a businessman he already knew existed.
“Whatever can promote business, I will do it so long as it is within the confines of the law,” he assured, adding, “That is a promissory note I’m giving you, because I’m a businessman and I believe in creating jobs, wealth and prosperity”.

He did not dispute any of the issues raised by the business community. Rather, he acknowledged that the problems facing the business and manufacturing sector “are evident” and for that, he would not waste time in tackling the problems headlong once he takes over as president in 2019. He agreed that it was a bad policy to stifle the seaports in the eastern part of the country.
“There is need to bring the ports nearer to where you do your business (as) it would bring down the cost of doing business, engender business expansion and attendant creation of jobs.”

Atiku empathised with the business community in the South-east and Nigeria in general as they are barely staying afloat against the onslaught of the harsh operating environment. “I feel your pains; it pains me because I’m a businessman and manufacturer,” he said, adding that the business community must work together with his incoming administration “to remove the problems”.
The PDP presidential candidate made the business community understand that he has got the touch to get things working. He readily used his personal experiences in the business and manufacturing sector to prove his deep knowledge of business and economy, having built a successful business empire, creating jobs and prosperity for thousands of Nigerians.

According to him, there was hardly what anybody could tell him about business environment and it would sound Greek to him. Atiku told a story of how he stopped his companies from spending N600million on haulage and instead, set up his own haulage company, which has continued to thrive till today, saving costs for his other companies, creating jobs and making profits.
On the contrary, he said the president and his ruling party lacked good understanding of the economy and there was absolutely nothing they could offer again to turn the economy around after wrecking it.

Atiku noted that the APC government inherited a very healthy economy rated as number one in Africa only for them to mess things up due to lack of knowledge. He warned that Nigerians should “not repeat the mistake of bringing back this (APC) government” to power in 2019 otherwise nothing more would be left to be salvaged in the economy of the Nigerian nation.
“So, my brothers and sisters, the government that has tried to solve most of the challenges that the business community are facing in this country is the PDP government,” he stated.

Atiku asserted that he and his running mate, Obi represent the face of the economic revival that Nigeria would experience once PDP returns to power. According to him, Nigeria has never since independence been presented with the prospect of having the kind of presidential ticket composed of “two very experienced men, both in governance and business: Peter Obi and myself”.

At the end of the conversation, the business community was not disappointed. They got firm assurance from the man with the midas touch who, according to Governor Ikpeazu was expected to provide tailor-made solutions to the problems enumerated by businessmen and manufacturers.
Indeed, Obi stated that Atiku knows what is happening in the market and at the ports hence he came to Aba, the home of SMEs and entrepreneurship to meet the stakeholders, because he has solutions to the problems.

According to the PDP presidential running mate, SMEs and entrepreneurship are the things that change nations and Atiku is coming to apply the remedy needed to revive the nation’s economy. On his part, Secondus expressed the same view as he told the business community that Atiku was already armed with a policy document with which to “unlock the economic potential of this country” and would carry everybody along in the journey to prosperity.

He said unlike President Buhari, who “does not take responsibility and is not aware that poverty has taken root in Nigeria and that killings have become the order of the day, Atiku on his part would take full responsibility and bring the economy and security back on stream.
Atiku challenged Nigerians to give him and Obi a chance to make Nigeria better. “If you doubt us, you know what you should do: try the two of us,” he said.