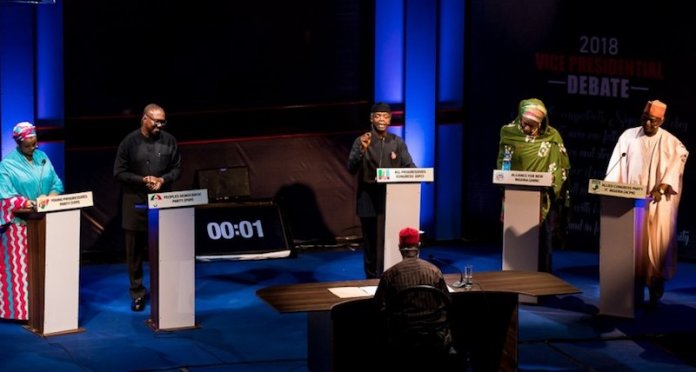 • VP: Petrol price could go as high as N220 if subsidy is removed • Obi: What we are subsiding today is inefficiency

Vice President Yemi Osinbajo yesterday squared up with four other Vice Presidential candidates in a two and half hour debate where he openly disagreed with the Vice Presidential Candidate of the Peoples Democratic Party, PDP, Mr Peter Obi on the issue of fuel subsidy.

While Osinbajo justified the necessity for retention of fuel subsidy or the pump price will peak at N220, Obi criticised government’s retention of oil subsidy to the detriment of other sectors like health.

According to him “Fighting corruption is not an economic policy. It is not that you can’t fight corruption; you can fight it more aggressively while addressing economic issues.

“If you look at our stock market, it has lost over N2 trillion in one year. So, that is no policy, you are not creating jobs, and you are just fighting corruption. You can’t shut down your shop and be chasing criminals.

Speaking further, he said while South Africa capital market stands at $900 billion, as the second largest economy in Africa, Nigeria’s capital market today is only $30 billion, stressing that it shows the shallowness of the economy, because the government in power is not doing what it is not supposed to do.

Commenting on continued subsidy of oil by government, Obi advised government to do away with subsidy saying fuel prices will come down if subsidy was done away with.

“There is no way a country can have a budget of N340 billion for health which translates to N5 a day for each of its citizens and then pay a Trillion Naira for subsidy”.

On his part, Osinbajo said the country at this time cannot afford to remove subsidy from petroleum products.

He said any attempt to remove the subsidy will have a telling effect on the citizenry “who may now have to pay as much as N220 on a litre of fuel”.

Osibanjo explained why the administration suddenly embraced the subsidy policy it opposed vehemently during its 2015 election campaign, stating that it wasn’t a bad idea to operate subsidy since it will help reduce fuel price for the masses.

Osibanjo however took a swipe on the PDP, faulting the argument made by Obi in the area of economy and poor performance of the banking sector saying that while Nigeria fell 64 spaces in the World bank index during the PDP administration, we have climbed back 24 spaces in the last 18 months in ease of doing business.

On what he intends to differently if re-elected, Osibanjo said the present administration intends to improve on what is being done presently.

“Certainly we intend to build on what we are doing that is why we are talking about the next level. At the moment we have moved 24 places up in the ease of doing business. It means that internationally we have been accepted as the top 10 reforming economies in the world according to World report. “One other issue is about the Foreign Direct Investment and of course we have been creating environment, we need to improve on power supply which is one of the critical issues we are addressing, improving transmission assets and distribution assets,” he said.

Osibanjo said that his party strongly believes that investment in infrastructure is very critical to the attraction of Foreign Direct Investment.

He said it was due to the prudent nature of the administration that its able invest infrastructure five times more what was done by the previous administration even with earnings as low as 60%.

In the area of infrastructure, he said the present administration has done a lot on infrastructure development, especially in the building of rail transport facilities and construction of roads.

On her part, the Vice Presidential candidate of the Young Progressive Party (YPP), Umar Getso said her party would pursue the restructuring of the economy and improvement critical sectors like healthcare, education, job creation and security.

On her part, the vice presidential candidate of Alliance for New Nigeria (ANN), Khadija Abdulahi-Iya said, “We are going to do devolution of power, we are going to do resource control and constitutional amendment, because those are the structures that affect the endemic poverty that we have in Nigeria.”