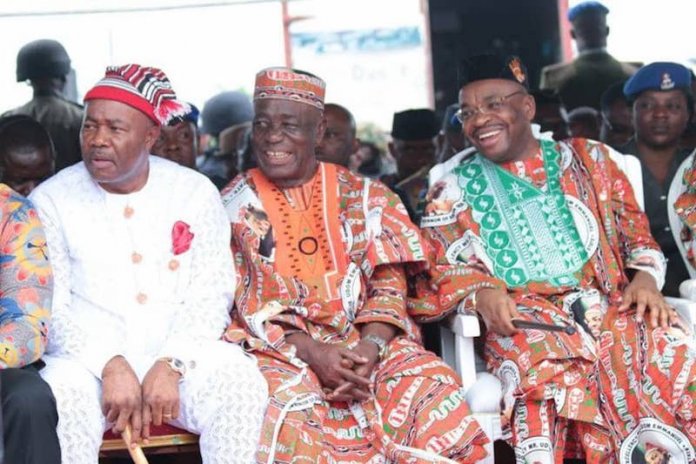 No fewer than 20, 000 members and officers of the All Progressives Congress (APC) from the units, wards and chapters in Akwa Ibom State yesterday defected to the Peoples Democratic Party (PDP) in the state.

The venue of the reception, which was the Ibom Hall along IBB way in Uyo, the state capital was filled to capacity with the state Governor, Mr. Udom Emmanuel, personally present to receive the defectors that displayed a mock coffin carrying inscription “APC RIP”.

Emmanuel described the action of the former APC members as a decision taken at a right time.

He used the reception to preach peace for the new entrants into the party, saying PDP stands for peace and would not shed anyone’s blood in its quest for political power.

According to the governor, their decision to defect to PDP was not because of him, nor the party chairman or any other person but for the soul of the state and tasked them to stand up always in defend of the state.
“What you are doing today is not about me, it is about the party chairman, or any other person, it is about the soul of Akwa Ibom State,” he stated

The governor insisted that there is no party well prepared to rule the state as PDP, saying he was not moved by the ranting of the opposition to sweep Akwa Ibom State describing it as “empty vessel” that makes the loudest noise.

“I am not moved by the ranting of the opposition in the state but let me assure you that PDP will stand for peace and for development of Akwa Ibom state,” he said.

The state chairman of the PDP, Obong Paul Ekpo, said the number of the defectors was unprecedented in the history of the party in Akwa Ibom State.