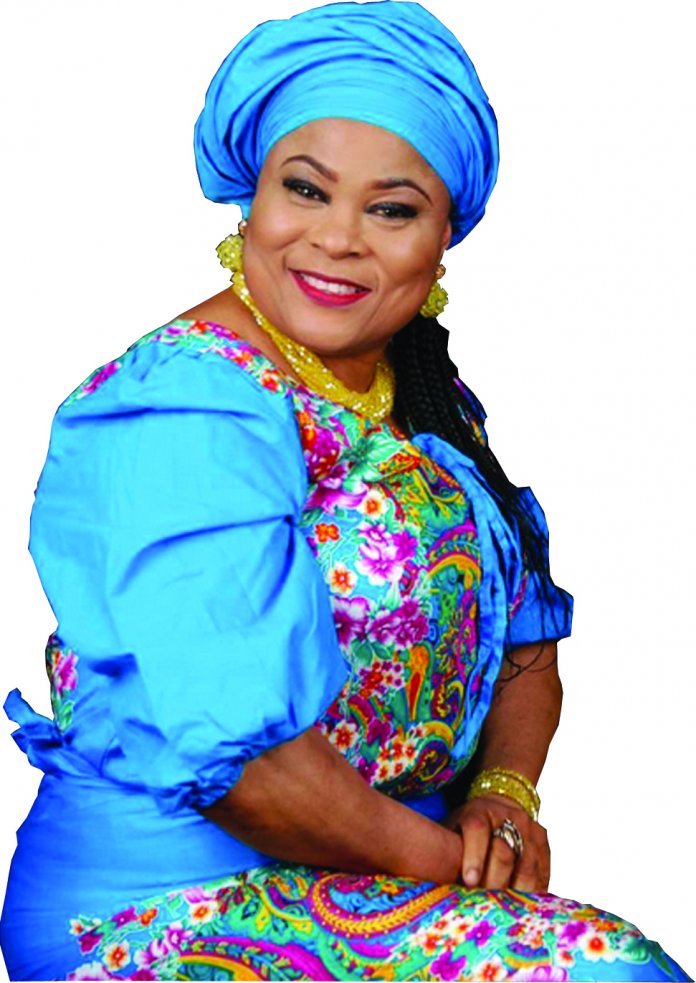 Nollywood veteran, Sola Sobowale, is one superstar actress whose pedigree and stance remains defined by her kind of roles, writes Ferdinand Ekechukwu

Definitely one of Nigeria’s movie icons, Sola Sobowale’s pedigree as a reputable actor was long established when she first starred in the famous soap opera,Village Headmaster. That debut set the path for her acting career in the movie industry. Her foray into acting actually began when she was enrolled at the University of Ibadan to study music with the aid of her in-law, Tunji Oyelana.

She however switched to Theatre Arts because of her passion for acting. From the rested ‘Village Headmaster’ to Lola Fani-Kayode’s ‘Mirror in the Sun’ to Femi Osofisan’s stage play, ‘Our Husband Has Gone Mad Again,’ it was a steady rise for her.
The ‘King of Boys’ star however said she won’t bring herself so low to kiss and cuddle amorously in any movie scene just because she needed to interpret her role perfectly. In a recent interview, she said, “Yes ooh, they are so many. I am not going to go naked, definitely and no smooching. Nobody is coming to smooch me, no smooching. I am a typical African woman; let’s stay like that, don’t let us take it to the foreign land…”
Prior to the interview, Sola had once affirmed, “Another thing is that my colleagues know what to give me. There was a script in which I was asked to play a Sugar Mummy and I asked how they want me to play the role, because I have my own way. But then they told me the little boy will be cuddling me. I rejected the script.”

Sola who played ‘Eniola Salami,’ the main character of Kemi Adetiba’s blockbuster movie, ‘King of Boys’, has also been speaking about her experience while on set. The movie star revealed that she was touched beyond words when she got the script because she knew it was a defining moment for her career.
The actress also said Kemi Adetiba had a unique way of bringing out the best in every actor. Sola further said because Kemi Adetiba believed in her abilities to take on the role of Eniola Salami in ‘King of Boys’ and deliver it to the delight of the audience, she was willing to give her all.
Though she had scored more credits featuring in a long list of Yoruba movies, including ‘Asewo to Re Mecca’, it however did not undermine her stance on her kind of roles. “It was a pacesetting movie but did you see us taking off clothes? Even in the swimming pool scene, I had my swimsuit with a robe. I love Asewo to Re Mecca. I would do it over and over again.”

Sola’s popularity soared in 2001 when she starred in the TV drama series, Super Story titled ‘Oh Father Oh Daughter’, where she played the role of Toyin Tomato, which became her sobriquet because of her flawless interpretation of the role. “I thank God for Super Story. A lady walked up to me in Abuja and said ‘Thank you very much Toyin Tomato, you saved my marriage’. I said ‘what do you mean by that?’

“She said that her husband was like Suara (lead character) and there was someone out there like proper Toyin Tomato that was taking him away. She then called her husband to watch Super Story and he settled down, watched, listened and saw the whole thing and he came back home. I’m very happy that I could touch that woman’s life. I give kudos to Uncle Wale and I thank him so much for believing in me and bringing me on board for Super Story.
“I would say Super Story shot me to limelight because I had been working and no one had invited me out of Nigeria but with Super Story, I got an invitation to go to South Africa and Zimbabwe. It threw me everywhere; even Jamaicans saw me and said ‘Did you watch that show? This is Toyin Tomato’”.
She would thereafter, take on another lead role in Dangerous Twins, a 2004 top-chatting Nollywood drama produced by Tade Ogidan. She also featured in Family on Fire also produced and directed by Tade Ogidan. In 2016, Sola starred in the Wedding Party movie which was another proof of her superiority in the Nollywood industry.
Over the years, she has scripted, co-scripted, directed and produced several Nigerian films. She scripted, produced and directed, Ohun Oko Somida, a 2010 Nigerian movie. She joined acting as a member of the Awada Kerikeri Group. One thing about the thespian that not too many people know and not much of it is in the public glare is her family.
Sola is married to Dotun Sobowale and they are blessed with four children including a set of twins all grown up and educated in the United Kingdom. Dramatic, vibrant, captivating…she appears everything one could wish for in a movie character.
PIX: sola sobowale.jpg