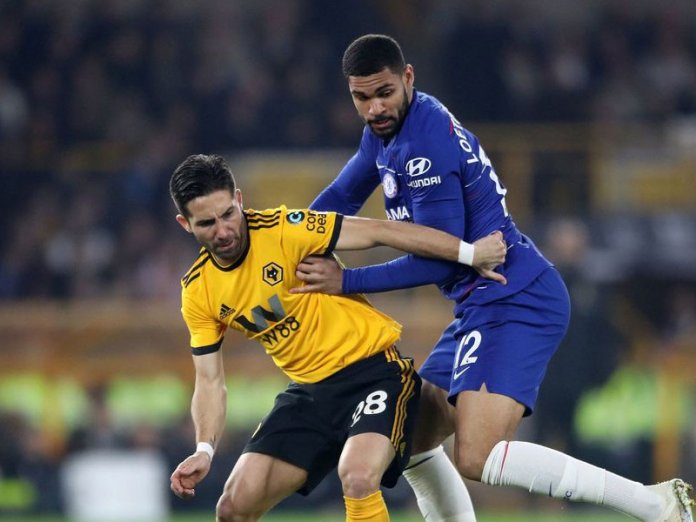 Wolves fought back from a goal down wednesday to stun Chelsea and gain their first victory in seven Premier League matches.

The visitors went ahead when Ruben Loftus-Cheek’s 25-yard effort was headed into his own net by Wolves captain Conor Coady.

Chelsea had chances to extend their lead but Willian had a free-kick tipped over, Antonio Rudiger shot off target and N’Golo Kante fired just wide.

Wolves scored what proved to be the winner four minutes later as Matt Doherty’s cross was finished at the back post by Diogo Jota for his first Premier League goal.

It is now back-to-back away league defeats for Maurizio Sarri’s side, who are set to drop down to fourth below Tottenham and remain 10 points behind leaders Manchester City, who they play at Stamford Bridge on Saturday.

Elsewhere, Substitute Roberto Firmino scored with his first touch as Liverpool came from behind to beat struggling Burnley and move two points behind leaders Manchester City in the Premier League table.

Jack Cork gave the hosts a surprise lead after Alisson could not gather the ball following a corner but Jurgen Klopp’s side hit back with three goals.

James Milner equalised with a superb low finish from distance and Firmino, one of seven players left out from the side that started against Everton on Sunday, tapped home from Virgil van Dyke’s cutback.

Xherdan Shaqiri sealed the points on the counter attack moments after Alisson had produced a superb save to deny Ben Mee.

At Old Trafford, Manchester United and Arsenal fought out a frenetic draw with Jesse Lingard scoring a sucker-punch equaliser for the hosts 74 seconds after the Gunners had regained the lead.

Lingard nipped in to exploit a mix-up between Sead Kolasinac and goalkeeper Bernd Leno straight from the kick-off after Alexandre Lacazette bundled in following Marcos Rojo’s mistake.

Before the break, Shkodran Mustafi’s header had squirmed through David de Gea’s gloves to open the scoring for the Gunners, via goalline technology.

Both team had chances in the final 20 minutes but, with heavyweight boxer Tyson Fury in the crowd, neither could land a knockout punch.

Henrikh Mkhitaryan’s brilliant volley from an acute angle was rightly ruled out for offside as the visitors came closest to a winner.