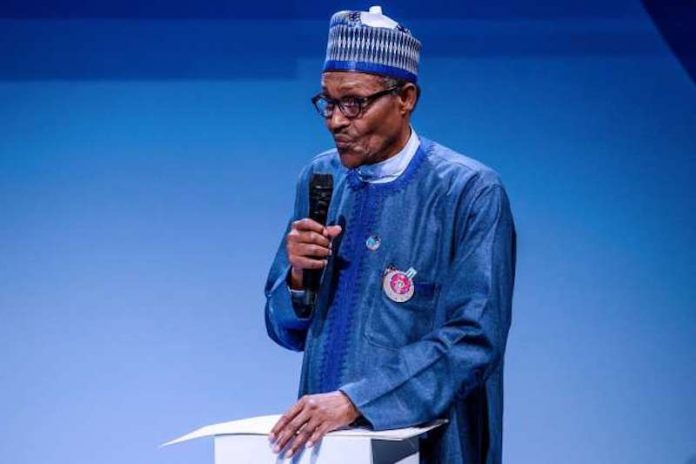 President Muhammadu Buhari yesterday in Paris, France promised to investment more in the education sector, premising this, however, on improvement in the revenue of the country.

The president, who spoke during an interactive session with the Nigerian community in Paris, also told Nigerians in the Diaspora that he was doing his best to effectively utilise Nigeria’s resources but was often frustrated by huge volume of stolen money stashed in the United States, Europe and other countries.

Buhari’s pledge to uplift the education sector, which he admitted was the engine room of the nation’s development, came against the background of the strike by university teachers, who downed tools last week to protest government’s poor funding of the nation’s universities.

Special Adviser to the President on Media and Publicity, Mr. Femi Adesina, in a statement, said Buhari lamented that even though his efforts were already yielding results in the transport and power sectors, he was being frustrated by the huge looted funds kept abroad. 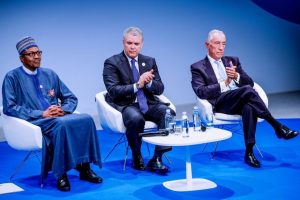 “I am doing my best now to utilise our resources to develop the country. We are already getting results on road, rail and power. My frustration is that some people still have plenty stolen money stashed in Europe, U S and other countries,” Buhari was quoted as saying.

Adesina said the president also noted that about five per cent allocation to the education sector was inadequate to propel the desired growth for the economy, noting that the United Nations target of 26 per cent remained the ideal standard.

“We are currently reviewing investments in the entire infrastructure of the country like road, rail and power, including investing more in education. We will certainly need to do more in education,’’ he was further quoted.

According to him, Buhari enjoined the Nigerian elite, both at home and in the Diaspora, to do more in contributing to the educational sector of the country, expressing surprise that the elite tolerated the fall in standards and structures of educational institutions despite oil windfalls in the past that would have made all the difference.

Furthermore, the president’s spokesman said Buhari submitted that the return of stolen assets in some safe havens would bolster the administration’s current effort to invest more in critical infrastructure that would directly impact on the livelihood of Nigerians.

He also said the president pledged that the war against terrorism would be reinforced with new weapons and hardware for the military, adding that the challenge of abduction and kidnapping in some parts of the country would also receive more attention with better gathering of intelligence.

“We campaigned on three key issues; security, improving the economy, and fighting corruption, and we have not been controverted by anyone that we have not recorded some results,’’ he further quoted the president.

The statement said Buhari also spoke on issues bordering on Nigerians’ in Diaspora participating in elections back home, saying the president reasoned that the population of citizens in various countries across the world had already necessitated their involvement in the election of their leaders.

However, he said the president noted that this desire might not be realisable in the 2019 elections because the Independent National Electoral Communication (INEC) had been more focused on moves to strengthen and consolidate on the effort to conduct credible elections within the country but expressed optimism that it might come to fruition in future.

The statement added that the Nigerian Ambassador to France, Dr. Modupe Irele, in her remarks, told the president that the Nigerian community in France had demonstrated a high sense of responsibility, dedication and morality.

According to her, the large number of professionals in the community had been encouraged to also contribute to the country’s development.

According to the statement, Irele said Buhari’s commitment to change would make Nigeria the envy of other African countries.

It also said the Nigerians in Diaspora, who participated in the meeting, raised questions on education, inclusive elections, security, infrastructure and the economy.

It added that the meeting was facilitated by the Senior Special Assistant to the President on Diaspora Affairs, Mrs. Abike Dabiri-Erewa and attended by Governors Willie Obiano, Aminu Masari and Kayode Fayemi, of Anambra, Katsina and Ekiti States respectively, as well as other top government functionaries.

Meanwhile, Acting Chairman of the Economic and Financial Crimes Commission (EFCC), Mr. Ibrahim Magu, yesterday told journalists he was not bothered over the issue of his non-confirmation as the substantive chairman of the anti-graft agency in Nigeria.

Magu also explained that his commission was seeking the extradition of former Minister of Petroleum Resources, Diezani Alison-Madueke, because the United Kingdom authorities have failed to take legal action against her since 2015.

Responding to questions from journalists at a media parley to mark his third anniversary in office, Magu said he was more concerned with uprooting the monster of corruption from the country, redeeming the much bartered image of the country as a result of corruption and his shared belief with President Buhari that “if Nigeria don’t kill corruption, then corruption will kill Nigeria.”

Magu was appointed by President Buhari in November 11, 2015 to head the nation’s anti-corruption agency, the EFCC, but the Senate on different occasions, declined to confirm his appointment over allegations of corruption said to have been levelled against him by the Department of State Services (DSS).

Despite the position of the Senate, the president in what some believed to be a demonstration of his strong confidence in Magu’s ability to prosecute effectively the corruption war, however, refused to have him replaced.

Given his stewardship in the last three years as acting chairman of the EFCC, Magu in response to a question on the issue of his non confirmation by the Senate said, “If people are in a hurry to confirm you in this work that I am doing, it means you are not working, it means you are derailing, you are not doing what is required because in this job there is no fear or favour.

“You just concentrate on targets and get the work done that is the most important. If you are busy lobbying for confirmation you can’t be fair, you can’t be balanced. My only concern is to focus and I want you to help me to be focused, there is nothing wrong in you telling me Magu this is how it should be done, do it that way maybe you will have a better result”, he said.

According to him, despite corruption always fighting back and his life and that of his men being constantly threatened, he would not relent in his effort in tackling corruption in the country.

He said, “Indeed, the task of fighting corruption in Nigeria has never been, is not and can never be an easy one. The battle to make our dear country a place where foreign investors will be confident to invest in is, without doubt, one that must be fought by all Nigerians who love this country, if we are to make any appreciable progress.

“Notwithstanding all that, we can still say that overall, for us as an anti-graft agency, it has been, so far, so good. The past three years have been very eventful, and in spite of the obstacles, we have consistently made progress in the areas of convictions, and particularly the recovery of assets stolen from our commonwealth.

Magu disclosed that following court orders, which granted the commission’s prayers for interim and final forfeiture of looted funds, the agency under his watch between November 2015 and today recovered over N794billion.

Magu added that his commission was seeking the extradition of former Minister of Petroleum Resources, Alison-Madueke, because the United Kingdom authorities had failed to take legal action against her since 2015.

He added that the commission was equipped to successfully prosecute the former minister who had been accused of mismanaging oil funds to the tune of $20bn.

When asked if her extradition to Nigeria would not affect her pending case in the UK, Magu said, “There is no court trial. She was being investigated even before I assumed office. So, it has taken so long and it is very unreasonable that she is not being tried there.

“So, we are tired of waiting and that was why I said if you cannot prosecute her, bring her and we will prosecute her. There is no prosecution going on in the UK. “We are involved in the investigation in this country and outside the country, including America and London. I have been there. We have worked and sat together. We cannot wait endlessly. I think three years and above is sufficient for you to take her to court. There is no court process against her in the UK. Nobody is prosecuting her there.”

Magu refused to answer questions on whether the Kano State Governor, Abdullahi Ganduje, was on a probe.

During the question and answer session, the EFCC boss was asked to confirm if the commission was investigating Ganduje who was allegedly caught on camera collecting kickbacks from contractors.

He simply said, “Next question please.”

The Kano State House of Assembly had begun investigations into the matter but was stopped by a court from going further.

The Chairman of the Presidential Advisory Committee Against Corruption, Prof. Itse Sagay (SAN), had said the Kano Assembly was not competent to probe the governor, adding that only an anti-graft agency like the EFCC could do so.