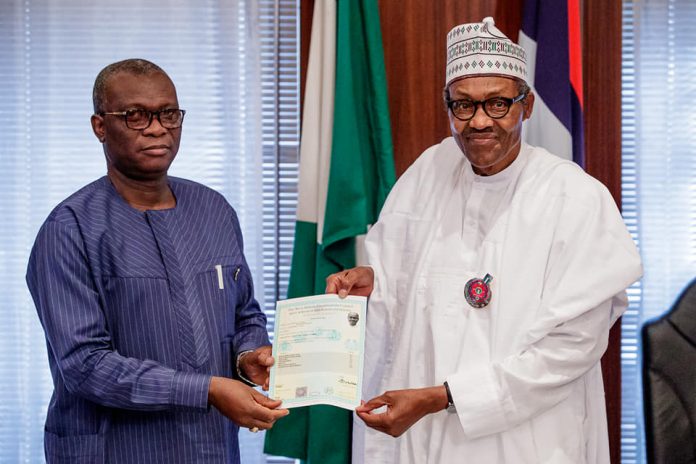 The Peoples Democratic Party (PDP) has said the public demonstrations that the presidency may have procured a forged West African Examination Council (WAEC) Certificate attestation and confirmation for President Muhammadu Buhari has turned the country to a laughing stock in the West African sub-region and the global community.

The PDP has also written to the Independent National Electoral Commission (INEC) insisting that the electoral body violated the party’s constitution, 2018 rlectoral guidelines and the Electoral Act 2010 as amended when it chose to recognise the candidates submitted from an unknown group from Ogun State.

The main opposition party said the most appalling was that the president’s handlers have succeeded in dragging a reputable institution as WAEC into public disrepute and opprobrium.

The party in a statement issued yesterday by its National Publicity Secretary, Mr. Kola Ologbondiyan, said Nigerians were quick to demonstrate marks of forgery in the attestation issued by the examination body.

According to him, “The development has turned our countryto a laughing stock in the West African sub-region and the global community, as our president is now being mentioned as beneficiary of a duplicitous act.”

Ologbondiyan noted that a check on the attestation clearly shows that it does not have the ‘Original Certificate Number’,  the key authentication feature in all genuine attestations by WAEC.

He stated: “Instead, a non-applicable is entered, indicating that the beneficiary does not have a certificate to be attested to, thus rendering the said attestation unauthenticated, fake and of no effect.”

“Does it not smack of high level scam that the same WAEC, which in 2015, confirmed that it does not have records of President Buhari’s certificate, now had to send officials to present the president with an attestation that has no original certificate number?”

The opposition party alleged that the unauthenticated attestation has shown that Buhari does not have a WAEC certificate; we urge his handlers to humbly so admit and apologise to the country, having exhausted all gimmicks to mislead Nigerians.

The PDP added that by WAEC rules, attestations are only issued in the case of missing or destroyed certificate.

Ologbondiyan queried: “Why then should the examination body issue an attestation to President Buhari, whose certificate, he claimed is with the military and not missing or destroyed?

“If not intended to circumvent the system and deceive Nigerians, why did President Buhari’s handlers chose to write to WAEC to issue an attestation when he, as the Commander-in-Chief, has the powers to direct the military to make available his credentials for all to see.”

“The Buhari presidency should know that there is no way the truth can be suppressed. In fact, the current disagreement between the presidency and WAEC over who initiated the attestation deal is also very revealing. “

The PDP urged WAEC to redeem its image by handing over all its officials involved in the deal to the INTERPOL for investigation and prosecution, while also calling on the Nigeria Police to immediately invite the president’s handlers for questioning over this huge national embarrassment.

Meanwhile, the PDP has written to INEC insisting that the electoral body violated the party’s constitution, 2018 electoral guidelines and the Electoral Act 2010 as amended when it chose to recognise the candidates submitted from an unknown group from Ogun state.

To this end, the party urged the commission to reverse the ‘illegality and travesty’ in order to preserve the sanctity of the process and its constitutionality.

The electoral body had in a letter written to the party on October 25, 2018 and received on October 30, 2018, notified the PDP of its decision to publish the lists of candidates submitted by the Adebayo Dayo led State Executive Committee of Ogun State PDP in pursuant to the orders until it is set aside.

The Federal High Court in Abeokuta had on October 2, 2018, in Suit No. FHC/ABJ/CFS/636/2016, Mr. Adebayo Dayo (State Chairman) and eight others vs INEC and three others  ordered the commission to recognise Adebayo Dayo led State Executive Committee of PDP in Ogun State and receive list of candidates for the 2019 governorship, National Assembly and state House of Assembly elections from the said committee.

However, the main opposition party in a letter dated November 1, 2018 with reference number PDP/DOM/GF.V/VOL.V/18-373 and  signed by the National Chairman of the party, Prince Uche Secondus, and the National Secretary, Umar Ibrahim Tsauri, said the party rejects INEC’s decision in its totality.

The letter titled; ‘Re: Nomination of Candidates For 2019 General Elections in Ogun State’ read; “Please refer to your earlier letter with the above caption in which the commission insisted on violating the constitution of our great party, the 2018 Electoral Guidelines and the Electoral Act of the Federal Republic of Nigeria (2010 as amended) and also in utter disobedience to several Supreme Court judgements on the exclusive right of political parties through their National Executive Committee (NEC)/ National Working Committee (NWC) to conduct Congresses for the purpose of nomination/sponsorship of candidates for elections into all public elective offices from Councillorship to Presidency.”

“We wish to state frantically and authoritatively that the PDP, a law-abiding political party, officially rejects in totality and in very strong terms the attempt of the Commission to foist candidates on the Party through illegal congresses embarked upon by few dissident persons claiming to be members of our party.”  The party said it was tempted  to believe that the decision of the Commission to accept names of candidates from ‘controversial, lawless individuals’ from Ogun State who illegally assembled in the name of congresses, without the knowledge of the party’s NEC/NWC was instigated from outside.

The opposition party said otherwise it was impossible to agree that the Commission headed by a seasoned Professor, Mahmood Yakubu and supported by full-fledged Legal Department could ordinarily preside over and condone ‘this illegality’.

The party therefore, draw the commission’s attention to the position of the law on this subject matter as gleaned from both the PDP Constitution, the Guideline 2018, the Electoral Act 2010 (as amended) and decided cases, especially the Supreme Court.  The party said that the Buruji’s faction in Ogun State claims to have judgment  and purportedly stood on those false claims to fake the Party’s forms, sold them and on the basis of the conducted illegal congresses.

“We are by this letter urging you to reverse this illegality and travesty in other to preserve the sanctity of the process and its constitutionality.”