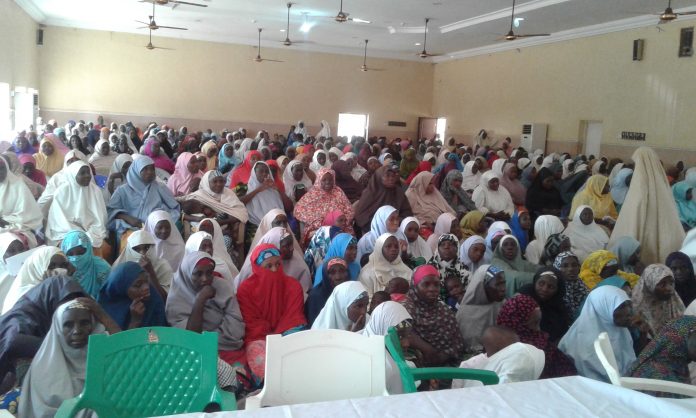 As part of efforts to alleviate the standard of living of women across the three senatorial zones of Katsina state, the state government Tuesday commenced the disbursement of N30 million to 3,000 women in an effort to boost their businesses.

The released of the funds to the beneficiaries was part of the state government’s commitment towards reducing unemployment and idleness among women in the state.

Speaking during the commencement of the programme at the Multipurpose Hall, Katsina, the State Commissioner for Women Affairs and Social Development, Dr. Badiyya Hassan Mashi, said the gesture would enable  the women to expand their businesses and contribute to the overall growth of the national economy via a significant rise in commercial activities.

“The state government had set aside the sum of N30 million for the empowerment of 3,000 women across the three senatorial zones of the state. Each woman would receive N10,000 as start-up capital to enhance her business. Our motive is to empower them economically to enable them to kick start their petty businesses or build on what they have started”, the commissioner said.

While reiterating that the issue of women empowerment was vital to the development of any society, Mashi said the state government under the watch of Governor Aminu Bello Masari has embarked on various programmes to improve the welfare of people in the state.

She said the state government would be glad to seeing the beneficiaries as partners and consultants with capacity to deliver as change agents in the nearest future, urging them to utilize the funds judiciously.

According to Mashi, economic growth can be achieved if all women are empowered, adding that it would help even their husbands at the home front, hence the decision of the state government to empower them with start-up capital.

She, however, called on women in the state to rally round President Muhammadu Buhari and Governor Masari by re-electing them in 2019 to enable them to consolidate on their “tremendous works” aimed at reducing the suffering of the masses.

Niger state chairman of the Peoples Democratic Party (PDP), Alhaji Tanko Beji has said that contrary to his threat, the governor of Ekiti state, Mr. Ayodele Fayose cannot leave the party because he was not only a foundation member of the party but a vocal and stabilizing voice when the party was in distress. Such a leader, he insisted cannot leave a home he labored to build in anger.

Besides, Beji said that Fayose is the chairman of the PDP governors forum a position he should not abandon in the middle of the sea.

Beji who fielded questions from newsmen in Minna on Tuesday expressed the view that the presidential aspirant and Sokoto state governor Fayose backed at the convention Alhaji Aminu Tambwal hasalready congratulated the winner, former vice president Atiku Abubakar and has also picked the governorship ticket of the PDP in sokoto state.

“Fayose cannot cry more than the bereaved,” Tanko Beji said before urging him not to take a step he could regret.

“  Fayose is a democrat we respect him in the party, majority of PDP members have said Yes to Atiku, Fayose cannot say No. What I expect Fayose to do is to key in with the majority, I hope his statement is a threat, he will not carryout the threat,” Tanko Beji said.

The PDP chieftain dismissed claims that some of its candidates for next years general election were sponsored by the opposition All Progressives Congress (APC) and had cases pending before the Economic and Financial Crimes Commission, saying “ we don’t have moles among our candidates

“We don’t have a mole in Niger state PDP, I have worked closely with all the candidates the zeal and commitment shown by all of them shows that they are committed to the party and the mandate given them.

The chairman said with the successful conduct of the state governorship, national and house of assembly congresses the PDP was set for the 2019 general election, “we are set for the battle by the time the ban on campaign is lifted we will go out full blast, our party is the party to beat we will pick everything that is there to take

“ We have put behind us whatever happened during the primaries, we have drawn a line, we are looking ahead to a bigger battle”

Those that picked the senatorial ticket of the PDP were former deputy chief whip of the House of Representatives, Alhaji Baba Shehu Agaie, Alhaji Ibrahim Ishyaku SAN and Alhaji Muhammad Sani Duba.