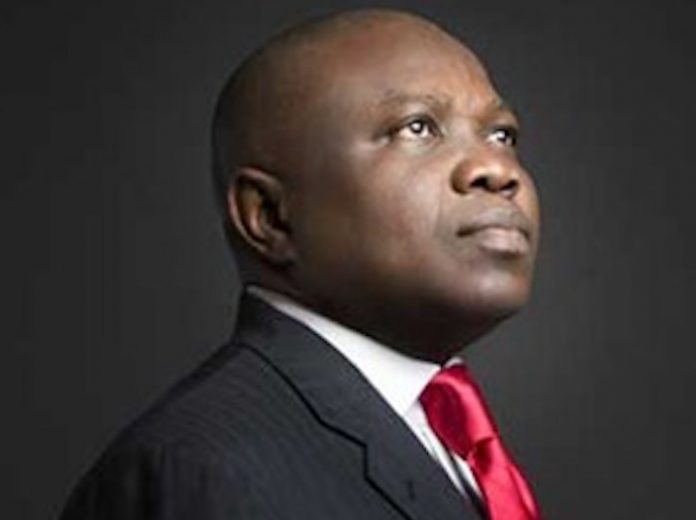 Oshiomhole: “The election has been held, anyone who is aggrieved should complain after the declaration of results”

It was the end of the road for Lagos State Governor Akinwunmi Ambode yesterday as the National Working Committee (NWC) of the All Progressives Congress (APC) upheld the governorship primary election held in the state.

There had been confusion on the status of the exercise held in the 245 wards spread across the 20 local governments of the state, following its cancellation by the Chief Clement Ebri-led electoral panel set up by NWC to supervise the poll in which the Managing Director of Lagos State Development and Property Corporation (LSDPC), Mr. Babajide Sanwo-Olu, was his sole challenger.

Ebri had told a press conference in Lagos yesterday that his committee was unaware of the primary conducted by the State Working Committee (SWC) because it did not follow the committee’s guidelines. He, therefore, cancelled it and ordered a fresh exercise for today.

But the party’s National Chairman, Mr. Adams Oshiomhole, overruled the Ebri committee and ordered it to collate the results of the poll and declare it immediately.

Oshiomhole told THISDAY last night that it was wrong for the committee to annul an election that had been held, saying the proper thing to do was for the results to be declared, and whoever was dissatisfied should complain.
“The election has been held, anyone who is aggrieved should complain after the declaration of results,” he told THISDAY, saying the committee clearly overreached its brief.

According to the national chairman, the committee’s brief was to supervise and not conduct the election, explaining that it was practically impossible for a panel of seven or so to conduct and micro manage an election held in 245 wards of 20 local government areas of the state.

Saying the will of the people must be respected, Oshiomhole directed Ebri to collate and release the results of the poll without fail.
THISDAY gathered further that the NWC was unhappy that the Ebri panel used its name to annul the primary when in fact it was in a meeting when the primary was going on.

As far as most members were concerned, said a source, the NWC was of the view that the election had held and its results must be declared.
Following this development, THISDAY learnt that the Ebri Committee would adopt the results announced last night by the state Chairman of the party, Mr. Babatunde Balogun.

Balogun had announced Sanwo-Olu as the winner of the primary at the state party secretariat, Ogba, declaring that he polled 970,851 votes to defeat Ambode, who polled 72,901 votes.
After declaring the result, Balogun commended the party members for coming out in good number “to participate in the primary, saying that their participation reflected their belief in democracy.

He said, “I am aware that conflicting information has been circulating on our primary election, but I must tell you that the election was held and it was free and fair. It would be very painful to disenfranchise the over 1.5 million members who voted across the 245 wards in the state.

“At the end of the exercise, Mr Babajide Sanwo-Olu polled 970,851 votes and Gov. Akinwunmi Ambode scored 72,901 votes. With this, Mr Babajide is declared winner. I thank party members for participating in the election and their dedication to democracy.”

Despite the intervention of Buhari, Vice President Yemi Osinbajo, Governor Abiola Ajimobi, former governor of Ogun State, Chief Segun Osoba, and the party’s National Chairman, Mr. Adams Oshiomhole, the opposition to Ambode’s aspiration was sustained with Tinubu insisting that the governor must test his popularity at the primary.

Last Thursday, Ambode took up the gauntlet and decided to face the primary, reactivating his campaign machinery with the recruitments of agents across the 20 local governments and 37 local development councils in the state.

Faced with an imminent showdown, the state’s highest political advisory group, Governor’s Advisory Council (GAC), chaired by Tinubu, which had compelled the primary contest, last Friday asked Ambode to stand down for Sanwo-Olu, its preferred candidate.

The governor refused and defiantly responded with a world press conference on Sunday, questioning the competence of the national leader’s preferred aspirant and warned of the dire consequences of the brewing crisis for the president’s electoral fortune in the state in the impending 2019 general elections.

His resistance to the coalition of forces arraigned against him collapsed yesterday as the party members trooped out to vote in the primary that eventually ousted him.